Win 1 of 5 Copies of Night At The Museum: Battle of the Smithsonian DVD/Blu-Ray 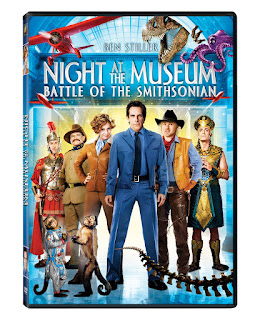 One of the side effects of letting my kids watch Night At The Museum: Battle of the Smithsonian is that they started asking, "When are we going to Washington D.C. to see the Smithsonian in real life?"

Sigh, as soon as you get a bit older and your mom gets some ducats to fly four people to D.C., stay in a hotel and feed you for a week, OK?

In the meantime, they can have some much less expensive fun with the film's star-studded cast: Ben Stiller, Owen Wilson, Amy Adams, Hank Azaria (I'm still not feeling him being cast as an Egyptian pharaoh but whatever), and the always entertaining Robin Williams.

Want to stuff this DVD in someone's Hanukkah/Christmas/Kwanzaa/Birthday/Just Because stocking?

Of course you do! Enter to win one of five copies of a special two-disc DVD/Blu-ray combo pack! This special edition also comes with an additional approximately 30 minute short film called "Monkey Mischief" - pretty cute if your kids are into the monkeys in the movie.

To enter:
Five winners will be randomly selected. I'll contact the winners on Friday, November 27, 2009. If there's no response within 48 hours, I'll pick another winner.

Want Additional Entries?
Good luck to you and if you don't win, this combo pack gets officially released on 12/1/09 and will retail for $34.98... but psst, it's on sale and available for pre-order on Amazon!

Winners, be on a lookout for an email from me - please respond within 48 hours! Thanks!

Lucrecer said…
We loved the first movie. My kids are going to love this one for sure.
lucrecerb AT yahoo DOT com
12:25 PM, November 23, 2009

Mrs. Sharpe said…
Submitting my entry! hzsharpe@gmail.com
I am also tweeting this!

Cassie said…
My husband loved this movie. I want to win it so I can give it to him for Christmas LOL.

Cassie said…
I tweeted about it. @keithcs

Anonymous said…
I'd love to watch this since I didn't get to watch it in the theater.

Anonymous said…
I want to win

Anonymous said…
My daughter loved this movie. It would be great for her collection.

sippinwineman said…
Okay, I'll bite. Tell your boys to look up in sky and give thanks for the relatively warm weather they enjoy. If they were visiting D.C. today they'd need to wrap up a little more. And Mom, 99% of the museums are free.

Leticia- Tech Savvy Mama said…
This is a great movie! My husband and I actually saw it over the summer on the IMAX screen at the National Air and Space Museum in DC! It was fun seeing Night at the Museum at one of the museums!

the prisoner's wife said…
Went to the Smithsonian in the 8th grade. FUN!

ok, this is my first time entering one of your contents. let's hop for beginner's luck!