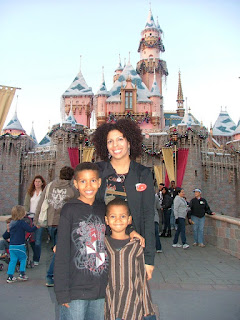 Attention: You're reading a blog written by, "The best mom in the entire galaxy."

My six year-old told me this on Saturday while we were at Disneyland and Disney's California Adventure for their Holiday Parent Blogger event.

I'm choosing to believe that my son would say this even if we were sitting at home watching paint dry.

We started off our day of Disney holiday magic at California Adventure because we didn't get to Anaheim till around 11:30 am. It's a little less crowded there than at Disneyland at that time of day. However, less crowded doesn't mean less fun!

First we had a ball getting a little wet on the Grizzly River Run water ride. Then we hit up Soarin' over California which totally makes you feel like you're flying over California in a hang glider, and after that, I rode the California Screamin' roller coaster with Mr. O, my eldest.

My husband claimed he couldn't ride it with O because he might have a heart attack. Instead, he stayed behind to eat Mickey Mouse-shaped ice cream with my still-too-short to ride youngest son, Mr. T. Never mind that eating the ice cream might cause the heart attack...

While my kids were trying to convince me to ride the Tower of Terror with them, we ran into Santa Claus! Mr. T told Santa he wants ANOTHER skateboard for Christmas and Mr. O filled Santa's ears with the virtues of a PlayStation 3.

Yes, please, Santa. Deliver a PS3 to our house even though we're not Christian and don't exactly celebrate Christmas with a tree or anything like that. Your bringing it is the only way one of those $$ consoles is going to find it's way in here in 2009. 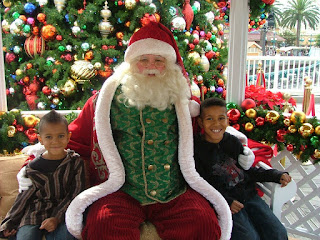 Santa lectured them about keeping their rooms clean and being good boys. Thank you, Santa!

Later on, Mr. O confessed to me that he knew the dude wasn't really Santa because, "I could see where the wig was glued to his face."

My response was to tell him, "You see, this guy is actually one of Santa's minions, and every night he has to fill out an Excel spreadsheet with everything kids like you tell him. Then he emails it to Santa, or else he'll get an unsatisfactory on his end of year evaluation."

I'm sure my boy will be in therapy one day talking about that response. Anyway, after taking some pictures with Santa, we rode on a few more rides - although I vetoed riding the Tower of Terror again - and then we all headed over to Disneyland.

Tune in tomorrow for Part 2 of my Disneyland Holiday Adventures where I meet my contest winner Hawiza, meet Princess Tiana, and get to see one of the adults in my family (not me) cry during the fireworks.
Email Post
Labels: bloggers Christmas Disneyland fun holidays kids santa claus