On Halloween my house got taken over by a Gypsy, Neo, Blade and a Bat Ninja. Here's the Gypsy and Bat Ninja: 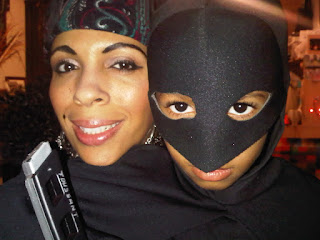 Wowzer, that was a LOT of makeup for me! I keep thinking how if I was a performer I'd have to wear that much makeup all the time. I was not feeling it!

Bat Ninja was only a ninja at his school's costume carnival on Friday, and also at Saturday's Halloween festival at our local recreation center. But after losing a costume contest on Satuday afternoon, Mr. Ninja declared that being a ninja "sucks" and so he transformed into a Bat Ninja. Thank goodness I kept last year's Batman costume!

As for Blade, he knew he was styling! 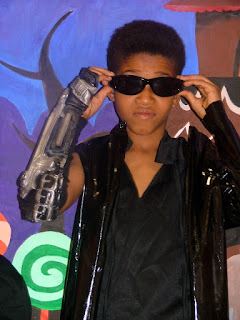 Don't mess with him! He might pop his collar on you!

And you know how Jay-Z said he might wear "all black everything" for a year? Clearly, he stole that from my family: 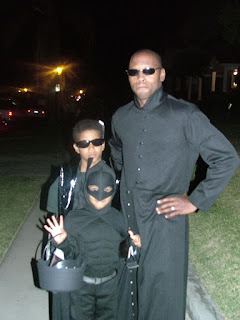 Don't they look cute? I'm SO glad Neo decided to be Neo and NOT Darth Vader. Rolling up to people's doorways with your kids while wearing a big azz mask is a no-no.

All dressed up we hit the streets. My sons are serious when it comes to collecting candy: 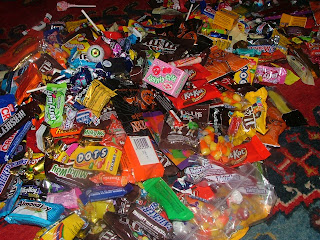 That's quite a haul, isn't it? We didn't hit up 10 million houses for it, either. We just know what neighborhood to go to, and my sons like to say, "Thank you so much for the candy. I love your decorations. Your house looks amazing. Have a happy Halloween!"

To give you an idea just how much candy my sons packed in, they got 71 tootsie rolls, 26 packs of M&M's and 15 packs of Reese's Peanut Butter Cups (including two full-sized). You name any chocolate candy you can think of, they got around 20 pieces of it. And stuff like suckers and Jolly Ranchers... dozens of them. Let's hope the "eat one piece a day" rule holds up.

If you didn't get any candy, I'd share with you...but I don't think Blade and Bat Ninja are going to go for that. Sorry! But, uh, hope you had a happy Halloween!
Email Post
Labels: candy costumes Family Halloween kids

Jen said…
Your family is SERIOUS about Halloween! Whoa. And yes, who could resist such nice, polite boys? ;-)

The Neo costume rocked, as did Blade. And you looked gorgeous, even if the make-up felt weird. C used to always switch his costumes half-way, too. Neo always trumps Darth, IMHO.

Liz Dwyer said…
Jen,
I guess we are kinda serious about Halloween! My kids start talking costumes in August. We have a pumpkin carving party, decorate the house, have a special dinner and even go to House of Pies for post trick-or-treating dessert every single year! I couldn't wait to wash all that makeup off. I wear some but never that much.

nick said…
Wow, that's quite a haul. Some people must have been handing out choc bars by the bucketful.

Funny, I tried trick or treating myself but I just got insulted everywhere I went. Do you think my age had something to do with it?
9:13 AM, November 02, 2009

Carolyn (Diary of a Sewing Fanatic) said…
At my house we were asking what was up with the polite children taking one piece of candy...we were giving out handfuls! Hey, I don't want all that sugar left over at my house! *LOL* So your sons would have loved coming to my door!
11:28 AM, November 02, 2009

Liz Dwyer said…
Nick,
There were some pretty big "kids" out there ringing doorbells but I think we're both past the age where anybody will open a door for us and give us chocolate.

Carolyn,
I wish they could've come to your place! They're happy with the amount of candy they got but they always are strategizing about how to get more.

Daniel,
Yup, that's him. But he's incognito in the glasses and costume so I figure his identity is still safe. -- Also, since he never comes over here to check out my blog, he's unaware that that picture's even there! Hahaha!
12:39 PM, November 02, 2009

I love Halloween.:) Sadly, I was too wrapped in school and paying college tuition to dress up in the pirate costume I wanted to get this year. We definitely need more Halloween carnivals around my neck of the woods...

Liz Dwyer said…
Jameil,
The stash is definitely being decimated. I think I should just re-name this blog "Baby Ruth" or "3 Musketeers".

Mimi,
Yes, Blade was STYLIN'! I loved seeing him feel like he looked SO cool! I feel like I never have the $ for a costume for me. Or at least I can always think of something else to spend it on. My gypsy outfit was the makeup, a scarf I've had for so long that I can't even remember where it came from & some earrings I got from H&M a year ago!
9:35 AM, November 04, 2009

k. emvee said…
I love your blog and am a dedicated reader. It keeps things real for me now that I'm no longer living in LA. I think you are right on with your commentary and posts almost all of the time.

Which is why is surprises me so much that you choose to dress up as a Gypsy for Halloween. Dressing up as someone who is a Gypsy/Roma, a member of another ethnic group that is being actively persecuted in Italy, the UK, and other parts of Europe especially is a bit tasteless. Honestly, it's as bad as the white folks in my parent's homogenous, conservative, close-minded and largely racist community who dressed up as Mexicans for Halloween this year.
12:12 PM, November 11, 2009