Snow White With My Sons: Eww, the prince is gonna kiss a dead girl! 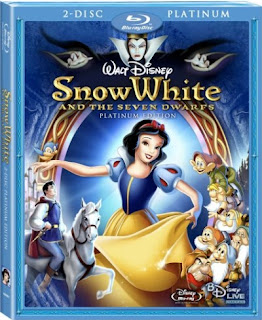 On Friday I was chatting on Twitter with fellow Depeche Mode fan just1mode and somehow it came up that my whole family still gets scared on the Snow White ride at Disneyland. Uh huh, yes we do!

That's when I remembered that I had a review copy of Snow White and the Seven Dwarfs Diamond Edition that I hadn't checked out yet. The Diamond edition is totally restored and also comes with a Blu-Ray version & some Blu-Ray extras (like the original storyboarding, which I've heard is pretty cool), but we're still old school with a regular DVD player. I need a Blu-Ray because I've read those discs are much more scratch resistant. What parent doesn't need more scratch resistant DVDS?

Anyway, yesterday I asked my sons if they wanted to watch it with me -- they remembered how scary the ride is at Disneyland, so they more than willing to rip it open the box and watch the film before heading out for some hard core trick-or-treating.

While watching the boys had some interesting questions and commentary:

1) Is that really a heart in that box? Yes, kids, Snow White does have some gruesome events going on. Attempted murder, a fake human heart in a box, poison apples -- it's sooo soap opera! I love it!

married to them? You know, I'd never thought about that before. I mean, look at that picture. There's Snow White in the bed and there's seven guys dwarfs hanging out at the edge of it, staring at her. Mmm hmm, Snow White. We see you, girl!

Just kidding! I told my kids that Snow White's like the dwarf's little sister. But I'm sure some filmmaker over the hill from me out in the Valley has made a version of this tale where Snow White is getting to know the dwarfs she's shacked up with really well. Wink, wink!

3) Eww, the prince is gonna kiss a dead girl! -- Eww! I'd never thought of it like that either! I told my sons that of course she's not really dead, but then I realized, the prince doesn't know that at the time that he's kissing her. Eww, eww, eww!

But I love the movie and you know my sons loved the movie, and how cute was it to see both of them singing along with Snow White and loving the dance numbers with the animals. Of course, I agreed with my eight year-old's observation that, "Prince Charming's got cool clothes!" And I think it's cool that a movie made in 1937 can capture the imagination of my 21st century sons.

If you want to check it out yourself, along with all the Blu Ray extras, it's on SALE on Amazon for 50% off. It's a classic so get it for somebody.
Email Post
Labels: Disney Disneyland Halloween I know you think I'm crazy after reading this kids Snow White