The Many Faces of Sammy Sosa 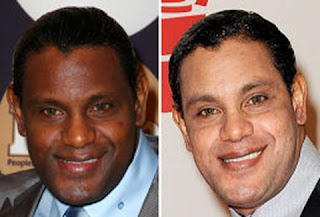 Take a good look at the man on the left... he's pretty hot, isn't he? That's former Chicago Cubs slugger Sammy Sosa. Steroid scandal aside, I still have a Sosa magnet on my refrigerator.

The man on the right? I don't know who he is. News reports claim that's also Sammy Sosa, but I don't know how that's even possible because that doesn't look like the beautiful brown-skinned Sammy I used to swoon over.

According to the Chicago Tribune, that color change is the result of some sort of skin rejuvenation process. Wow, really? Anti-aging, anti-wrinkle processes make you look like Al B. Sure!'s light skinned brother? Like a member of the De Barge family?

Because if that's the case, don't let the word get out to any other color-struck black people. Folks are gonna be trying to get Sammy on speed dial. "Where'd you get your insty light-bright done, Sammy? Hook a sista up with the deets!"

In the meantime, I'd like the beautiful brown Sammy Sosa I've loved for years to come back. Get rid of the contacts, the conked hair and the skin lightening treatments, Sammy. Some of us love you just the way you are the way you used to be.
Email Post
Labels: Chicago Chicago Cubs dark skin In the News light skin Sammy Sosa skin

Anonymous said…
we are all proud to be black and spout the effects of slavery etc, yet we are not all comfortable in our skin. Changing the color of our skin, reducing the size of our beautiful big lips, changing the nap of our hair etc etc.
black is beautiful!
it irratates me so much about how we black people now wanna look like white people and conversely white people wanna look black, strange world, innit?
Whens it gonna stop?
2:02 AM, November 08, 2009

Unknown said…
Im with Lucrecer - is that real??

Beauty Is Diverse said…
I saw that recent picture of him and didn't even realize it was him at first. Then again we don't know if he has a skin condition so im not going to say that he isn't proud of being in the skin he is in.
9:44 AM, November 08, 2009

Liz Dwyer said…
Anonymous,
This made me reflect on how we say we're black but it's almost like blackness is resented. It's a label we feel we have to slap on ourselves even if we don't really love it. That lack of love shows in us doing things to ourselves to try to escape from the unique beauty of blackness: the skin lightening, the hair straightening, the nose slimming and lip reductions.

How does it change? Checking ourselves. Choosing to raise our children to love and honor all aspects of themselves, the black, the native, the Irish...all of it. Telling them their kinky hair is beautiful and their skin is a gift from God. -- And really, that who they are is deeper than hair or skin. They are spiritual beings who must survive in a material world.

Lucrecer,
Yes, that's him. It breaks my heart but it's him.

Disneyland Mom,
He was SO good looking before. I know some people are saying it's steroids, but if that's the case, we should also see Jose Canseco & Barry Bonds' skin color turning into the twin of Casper the Ghost.

House,
It made me feel really sick. It was my WTF moment of the weekend. I wonder what he thinks when he looks in the mirror now.

Tiffany,
It would have to be a really fast-acting skin condition. Even six months ago his skin tone was business as usual. If it's vitiligo, wouldn't makeup to match lighter parts to the dark be the way to go? If he did a laser procedure to strip off the top layer of his skin, would that be the result & then it darkens up? I just don't know what to think.
4:08 PM, November 08, 2009

Liz Dwyer said…
Jameil,
Ha! I'll blame any insty light-bright sarcasm on it being almost midnight and my brain was probably not all the way there. ;)
8:27 PM, November 08, 2009

Greg Delaney said…
it's possible that Sammy is a little too excited about New Moon coming out this month
5:34 PM, November 09, 2009