Bloody Mary -vs- The Virgin Mary 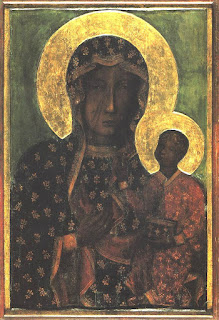 The minute I picked up my sons from school today they sprung "Mommy have you ever heard about Bloody Mary?" on me.

The who? The what? Bloody Mary? My mind did a quick scan of Marys I know about.

The light bulb came on in my head. Oh yeah! Bloody Mary.

"You mean the Virgin Mary?" I asked, wondering where this was coming from and what they'd heard to start calling her Bloody Mary.

"Of course I know about Mary. Mary's the mother of Jesus, but we don't usually call her "Bloody Mary" because that's just not respectful. "

My son's eyes got a little wider as they both hopped in the car and while buckling his seat belt my eight year-old asked, "You mean the mother of Jesus is Bloody Mary?"

I shut the passenger door, opened the driver's side door, sat down and looked up into the rear view mirror. Two pairs of shocked eyes were staring back at me.

"Oh come on, guys. You both have seen Mary's statue and picture before. Remember, they try to make her look all German and she's usually holding a baby with a halo."

They both looked confused so I continued. "You saw her statue all over Notre Dame. Oh, and there's the prayer, the Hail Mary. You've heard it before. It goes like this..."

I recited the prayer for them as we drove the last couple of blocks home..

"So that's what you say in the bathroom?" my six year-old asked.

Now I was confused. Come to think of it, I was probably feeling the same confusion that I had back in 4th grade where I actually asked Sister Paula (with complete sincerity), "How could Mary be a virgin if she was a prostitute?"

Too bad the Da Vinci Code, in all it's expository gloriousness, hadn't yet been written, because otherwise I would've been totally clear on the true identity of Mary Magdelene. To think that Dan Brown could've spared me from Sister Paula's wrath!

"No, you don't say your Hail Mary's in the bathroom," I replied, pulling into the driveway. I was a little irritated. Had I not taught these children anything about reverence at prayer time? Praying in the bathroom? Absolutely not cool.

"Well, Gustavo says you say Bloody Mary and then something bad happens to you," my youngest said.

"Yeah. She comes and, er, does something to you," my other son chimed in. "Something bad."

As I shut off the ignition, it dawned on me that we were not talking about the same Mary.

My Mary: Mother of God who will pray for us sinners, now and at the hour of our death. Amen.

Their Mary: The urban legend that the ghost of some heffa named Mary will kill you if you say her name a certain number of times.

EEK! I pictured them rolling up to school tomorrow telling kids, "The Mother of Jesus is gonna kill you in the bathroom!"

Oh noes. We could NOT have that. So I tried to play it off. "Oh, you mean THAT Mary. Hee-hee. Never mind everything I just told you about Mary, the mother of Jesus. I totally thought you were talking about the Virgin Mary."

At bedtime my sons were STILL asking me about Bloody Mary and the Virgin Mary. "Are you sure it's not Jesus' mom? How come you told us it was?"

The moral of the story is that you should refrain from answering your children's questions unless you are 100% sure what they're talking about. -- Which means you'll never answer their questions and you'll ride home from school in total silence every single day.

OK, if silence is too difficult, just have your kids recite times tables the entire way home. That way there won't be any awkward Mary slip-ups when someone says, "What's 4 x 3?"

*And if you think I'm confused, this post is brought to you by a blogger who's been telling people she's 37 when she's actually not. She just realized today that she's going to be 37 on her next birthday.
Email Post
Labels: I know you think I'm crazy after reading this jesus kids Notre Dame urban legends

nyc/caribbean ragazza said…
Hilarious. Who is this Bloody Mary Gustavo speaks of? ha
2:27 AM, November 18, 2009

Liz Dwyer said…
NYC/CR,
I am clearly in need of more sleep or more something - I totally mixed this up. I think it's because I went to Catholic school and kids there never tried to scare me with Bloody Mary tales.
9:10 AM, November 18, 2009

It wasn't until the next day that I realized I wouldn't turn 36 until December.

I usually answer a question with a clarifying question... "what do you mean?" or "why do you ask" so I get the background for context. It's also a great stall, and gives me a minute to think.
9:14 AM, November 18, 2009

Liz Dwyer said…
Curlykidz,
Yeah, last night I was sitting here wondering what I'm going to do for my 38th birthday next month and slowly it dawned on me that I'm only 36.

I think I was just so busy trying to hustle them to the car -- and for some reason my brain fixated on the Mary part and I mentally jumped to the Virgin Mary. ;)
9:36 AM, November 18, 2009

In the doorways stands a tan man in a dark gray suit.

Sgt.: Is it true you were raised in Chicago, IL?

Sgt.: I'll ask the questions, Ma'am. And you now reside in Los Angeles?

Sgt.: Explain to me, then, how you could NOT know about "Bloody Mary"?

Sgt.: Just I thought. Ma'am? I need to revoke your "Big-City Citizen's Card."

Liz Dwyer said…
Sippinwineman,
Haha! Sheltered? Yes! I'd heard of Bloody Mary before but not that much. I'd never even heard of that light as a feather stiff as a board mess till I was in college!

Sundry said…
Okay, I thought they were talking about the character from South Pacific who sings "Bali Hai." On the other hand, around where I grew up you were supposed to sit with your back to a mirror with a candle lit behind you and look over your shoulder with another mirror and repeat "I believe in Mary Worth" until a crazy old comic book lady came out of the flames and sliced you up with her razor blade finger tips.

This was considered a really good time on a Saturday night, compared with tipping cows.
1:41 PM, November 18, 2009

Marlo said…
That was the funniest thing I read this week!

I'm so glad I'm not the only one who jumps in and answers a question before really understanding what the kids are talking about.

Cynthia said…
My version of Bloody Mary contains, Vodka, tomato juice, a hint of Worcestershire, a squeeze of Lime and a dash of salt, garnished nicely with a celery. Hence the reason why I am no longer allowed to pick up my kid from school. ;O)
3:06 PM, November 18, 2009