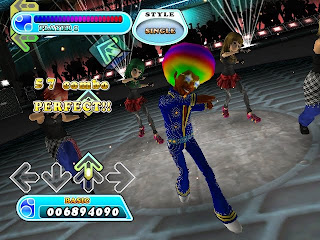 Remember the days of going to the mall and wishing you were cool enough to be one of those hip people dancing like a pro on on the ginormous Dance Dance Revolution platform? I was always too shy to get up there and dance, too afraid that my feet would get tangled up and I'd fall off, the laughter of my peers surrounding me. SOB!

Well, who knew I'd be lucky enough to hang out last week in the offices of the company that makes Dance Dance Revolution, Konami! My sons and I were invited to attend the Konami Family Fun Day and we had a great time meeting the staff (they even played the games with my sons), and trying out some of the new titles coming out this fall/winter. Or rather, my kids tried out the titles and I watched them play, which was just fine with me.

I know LOTS of people are starting to stress out over what to that special someone for Hanukkah/Christmas/Kwanzaa/Los Angelista's December 29th birthday - so here's the lowdown on the latest family-friendly Konami games.

The cool thing is that instead of needing a huge platform in your house, the game comes with a floor mat (complete with arrows) that you can dance on, or you can use your Wii balance board. Pretty nifty.

If you don't want to hear Depeche Mode, there's plenty of other fun music, everything from Rihanna, Lady Gaga and Pink... and ta-da: Bobby Brown doing "My Prerogative".

Los Angelista's Verdict: I'd say this game is good for six year-olds and up, even though the packaging says 10+. My youngest got a little confused on which way to move but I could see how with a few days of practice, he'd get the hang of moving his body in the direction of the arrow. Plus it has a "school" feature to teach you how to dance. (I might need that, not the kids!) Great multi-generational songs and family-friendly enough that nothing needs bleeping. And who doesn't want to dance as a character with a rainbow afro?

Cute idea: At Konami they had a little electrical disco ball in a dark room. Not sure where to get it but if you can't find one, turn off every light in your house but your Christmas lights and voila, you've got a party going on! 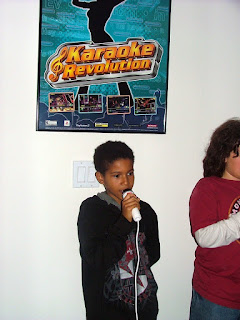 Karaoke Revolution: I'm completely convinced I'm going to burn in hell because my six year-old immediately wanted to sing Katy Perry's "I Kissed A Girl". He was sooo loud when he was singing it, too. "I kissed a girl AND I LIKED IT!" -- oh gosh, it was pretty hilarious. And as long as we keep the kissing to a song, I'm cool.

The kids were also super cute singing the Jackson 5's "ABC". See, my kids know wholesome and, er, not so wholesome songs. They can sing it all! I videotaped them singing and I wanted to post the footage but my 8 year-old told me I'm banned from posting footage of him singing. I got the, "Don't embarrass me, mom!" lecture.

Los Angelista's Verdict? 100% fun if your kid can read. Otherwise they'll only sing the choruses on the songs they know and they'll stand there looking confused the rest of the time. This gets released on 10/24/09.

Los Angelista Verdict: I couldn't get my son to stop doing the skateboarding so I can vouch that that part of it is awesome. The rest of it? Hopefully it's just as fun.

Other games: There were a bunch of other cool looking games there that we didn't try out but they might be a good fit for your family. Konami has a downloadable Frogger Returns game. Yes, THAT Frogger. Low tech but fun as always and the nice thing about the downloadables is they are MUCH cheaper. You can get like five downloadables for the price of one regular video game.

There was also a Scene It: Twilight game. My sons weren't going near that one. They could care less about Bella and Edward. "That's for girls." (Those sexists!) But if you have tween/teens that are nuts about Twilight, and sometimes that seems like every teen these days, that could be the game for them. It comes out on 10/24 as well.

Even though my kids were hoping they were going to be moving into the Konami offices, we did have to finally go home. There was a little bit of the, "We're leaving if I have to DRAG you out of here!" going on, but ultimately we hit the road for the schlep home in rush hour traffic. The boys talked about the games almost the whole ride home, and I got to hear another rendition of, "I kissed a girl AND I LIKED IT!"

Thanks to Konami for having us and letting my boys check out the games!

D- said…
Do you have facebook ?
If you do then press these buttons on your page and prepare to be enchanted (well...I was): UP, UP, DOWN, DOWN, LEFT, RIGHT, LEFT, RIGHT, B, A, ENTER, then Click anywhere