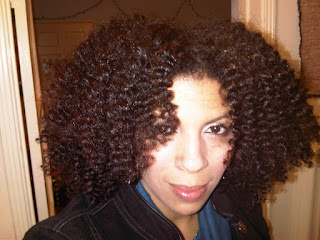 He took a picture of me with my BlackBerry camera. Don't I look sooo psyched?

Then he discovered the fact that the word "frizz" rhymes with my name. So until I threatened to beat him lock him in a closet, he would not stop with the "Frizz, Liz! Frizz, Liz!" mess.

True, it was a little frizzy due to it's getting a little damp in the shower but still, the child was working.my.nerves.

My other son, Mr. Angel Wings Are Sprouting, reassured me. "I will love you forever no matter how big and frizzy your hair gets."

Anyway, late last night after I finished having a nervous breakdown over my laptop cord dying, I got to mulling over this big hair thing, because mine is definitely big.

My hair is so big that when I take pictures with another person, you know the kind where you're both trying to smush together as much as possible, sometimes my hair has to be moved so the other person's face is visible.

It's so big that on chilly LA nights, my ears no longer get cold. Very useful because I can't really get a hat over it.

But let's face it. Our society doesn't really like big hair all that much. If you have big hair, you're a rebel, you're artsy, you're exotic. You get told dumb stuff like, "So are you an actress? I would've thought it looking at your hair."

No, if I was an actress, I'd probably have to have a weave to make me more "marketable".

Alas, in our society, you're only supposed to bust out the big hair when you're on a hot date and you're trying to look a little sexy. Remember, Jennifer Aniston's hair is still only "friend" hair no matter how hard she tries.

To get the man, you need to unleash the passionate woman hiding behind a reserved facade by letting your hair be wild and free. (Check the covers of Cosmo, King and Maxim if you don't believe me.)

But when you go to work, unless your job is a strip club, you better lock that hair up! Hello, helmet hair!

Maybe what I'm really musing over is who decides what hair is professional or not? What's sexpot or not? Why does big hair have to be stereotyped as sexy and exotic?

All I know is that my little boy better get used to the frizz. The big natural hair isn't going anywhere.
Email Post
Labels: about me Hair jobs kids magazines natural hair professional women Work

Doulala said…
Oh Liz! your hair looks SOOOOOO beautiful in this pic! Oh how I wish I would just commit to going natural. I've been doing the "grow it out for 6 months and then cave" thing for almost two years now. I want big beautiful hair like you. ;-)
-Maisha
7:10 PM, November 19, 2009

Call Family said…
Frizz- I hate that word. When I married my English husband, I learned that they don't call hair, "curly", just "frizzy." Like I was Ms. Frizzle form the Magic School Bus or something. I will spare you the stories of my "mushroom head" childhood years. Your "ginormous" hair is an inspiration to us all, so go ahead and rock it!
8:04 PM, November 19, 2009

Call Family said…
btw...you got to get him to see that new Chase (bank) commercial about texting with the natural hair mom and her two natural hair beauty girls.
9:49 PM, November 19, 2009

nick said…
Quite, it's not frizzy, it's curly. Frizzy means sticking up all over the place semi-punk style, which yours definitely ain't. Nothing wrong with big hair either, why does it have to be "tamed" and "controlled" to make it respectable? All these ridiculous stereotypes and dress codes....
1:41 AM, November 20, 2009

Liz Dwyer said…
Stacy,
Thanks for saying so. I like your biases! :)

Doulala,
You can do it! :) I did that 6 month thing for a few years too. I always felt like such a failure, like what was wrong with me that I couldn't commit to not having straight hair. But you know, when the time is right for you, you'll know. Otherwise, I think your hair looks lovely! :)

Call Fam,
Oh yes, he's moved on to Frizzy Lizzy. And I threatened to not take him to Disneyland tomorrow. I felt like mushroom head the other day but gosh, that's not a fun spot to be in as a child when you get teased more. I have to check out this Chase commercial! Sounds cool!

Nick,
Oh it was definitely a little frizzy but why does that have to be a bad thing? I hope as the world expands its horizons that some of these old-fashioned notions about what's respectable or professional get ditched.
10:48 AM, November 20, 2009

Jameil said…
You should move to Texas. I hear everything's bigger there. Hair definitely included! :) i love that you & 1969 have terrors for your youngest but the oldest is all sweetness & light. so funny.
9:55 PM, November 21, 2009

nyc/caribbean ragazza said…
I think your hair looks lovely in that photo.

To me, that is not big hair. Chaka Khan or Farrah Fawcett circa mid '70s? Now that is some big hair and I see nothing wrong with it. Those women looked fantastic. Why/how did that trend end?
6:45 AM, November 22, 2009