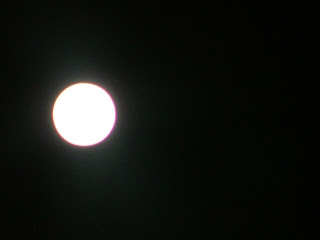 Friday night I had an incredibly vivid dream that I got into a serious car crash on the 101 Freeway.

Strangely enough, I had the same dream on Saturday night and then again on Sunday night. Each time I had the dream I woke up right after the crash happened, and each time I had a sinking feeling that I woke up because I'd died in the dream.

I'm no stranger to recurring dreams. I had the same dream (OK, a nightmare) every couple of weeks for almost 20 years, but at least in those I wasn't wrecking and dying in the right lane of the 101.

Someone suggested I look up the dream meaning online, and essentially it suggests that I believe my life is kinda effed up and I have no control over it. Hmm... maybe? I just know it scared the crap out of me. People drive like fools out here in Los Angeles and every time I get in the car I think about how I might not come back home.

Of course, my dear friend Ruha (who's totally brilliant) just had to invite me and my family to go on a moonlight hike last night in Charmlee Wilderness Park out in Malibu. And that meant I'd have to drive on the 101 for almost 36 miles to get out there. Crap, crap, crap!

I like to believe I'm not particularly superstitious but when you've had three dreams in a row about crashing on the 101, the last thing you want to do is DRIVE on the 101 for 36 miles! So, of course, I got in the car and headed up the 101 to Malibu.

Creeping along in rush hour traffic I thought about how I don't like to be ruled by superstitions but what if those dreams were really some sort of premonition or sixth sense at work? Maybe my subconscious was telling me, "Look, heffa! Stay your behind off the 101!"

I probably sound paranoid but I have had an insane number of dreams come true. What if this was one of them?

As I drove, my palms were sweating. I felt like I was having a panic attack in the car, and no amount of Depeche Mode could get me to calm down. My sons kept asking, "Mommy, are you OK?"

"Sure," I replied, ignoring the fact that I was gripping the steering wheel so tightly I could see my knuckles, saying prayers in my head, counting the miles to the Kanan Road exit.

Somehow, we made it in once piece to the wilderness park. My kids and I were greeted warmly by Ruha and her family, and we all got to hike around for two hours on paths illuminated by the full moon rising in the east. It was perfectly beautiful and I couldn't help but think about how I would've missed out on the experience if I'd been too afraid to get in the car and drive up the 101.

The drive back home I was completely unafraid. Same stretch of road but I no longer had that feeling like I was going to die in a car crash.

I wonder if I could've made myself crash last night because I was so freaked out and believed it was going to happen. Yes, what if I had crashed? Would that have been me causing the crash or would it have been fate foretold by a dream?

Lisa Johnson said…
I would have been scared too! I'm glad you're okay. Several of my dreams have come true too, but I have certain symbols in the dreams where I know they tend to be for real. If I have a really scary dream, but those symbols aren't there, then I can dismiss them more easily. Do you have something similar?
9:27 PM, November 03, 2009

Liz Dwyer said…
Anali,
No symbols, unfortunately. Having some would certainly reassure me, although if the symbols pointed to yes, I'm going to crash and die, I wonder what I'd do!

nick said…
I was going to say take no notice, most dreams are just meaningless subconscious nonsense, but since you said lots of your dreams have come true, that makes it genuinely scary. In which case, very brave of you to shrug it off and do the drive anyway. Not sure what I would do in the same circs.
4:38 AM, November 04, 2009

Kim Moldofsky said…
I have to say that would freak me out. My older son, a good swimmer, sometimes has dreams about drowning, and those make me nervous.
Now that you've beat the dream, so to speak,I'm curious to know if you have it again.
9:32 AM, November 04, 2009

Unknown said…
Liz, in our voodoo based family, and "no" I am no expert, but traditionally dreaming of a death is actually a sign that there will be new life. Three in a row? I'd say something big and wonderful is on your horizon...maybe one for each member in the house!
11:35 AM, November 04, 2009

Liz Dwyer said…
Nick,
It does make it a little scary. Wish only my good dreams would come true!

I had to do the drive because otherwise my sons would've cried all night. They are good friends with my friend's sons and I wouldn't have heard the end of it if we hadn't gone b/c of my dream!

Kim,
I haven't had the dream again, thank goodness. I'd be nervous about your son's dreams of drowning, too. I just wonder what's the difference between a real "sign" of something and total paranoia!

Houseonahill,
This makes me feel a little better. I sure hope good things are on the horizon. (runs to buy lottery ticket!)
4:56 PM, November 04, 2009

Amanda said…
I agree with houseonthehill. I think dreams of death are often like the death card in tarot - some part of your "self" is dying so that new life and rebirth can happen. Is there something in your life that you associate with 101 that you are letting go of? Wishing you safe travels.
6:17 PM, November 07, 2009

Liz Dwyer said…
Amanda,
Gosh, I don't know if there's anything I associate with the 101 more than home and Los Angeles in general. It's the freeway closest to my home and my favorite in the city. I guess we'll see. I haven't had the dream again though.
12:54 AM, November 11, 2009