Letters I Wish I Could Write

The sun has set on this week and I'm in bed curled up under the blankets with my super hot lover laptop. 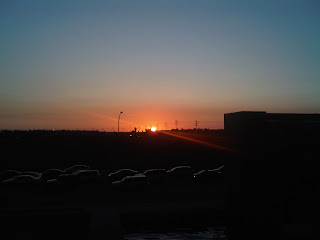 No, it's not exactly a sizzling Friday night, but I just realized there's a letter I need to write before I go to bed and it's based on the picture to your left. Gorgeous sunset in the background. Horrible traffic in the foreground.

I'm not sure what real work you do every day, especially since it seems like every time I turn around you're getting your picture taken.

No, I'm not exactly a fan of yours and I don't know anyone who really likes you or thinks you're doing anything good for this city. However, I have an idea for you that will instantly boost your popularity with all Angelenos, especially the one named Los Angelista.

If you install left turn lights at all the major intersections in the city, you will get voted for until the day you die. All the people who're ready to snap because it takes 10 minutes for them to turn left at the corner of Vermont Avenue and Venice Boulevard will instead head home and write op. eds to the Los Angeles Times singing your praises and declaring you're the most awesomest mayor ever.

If you do it, you'll probably get a statue made to honor you. Your minions will use the time they used to sit in horrible traffic to come worship at the statue. They may even perform poetry they've written in homage to your greatness. You know us Angelenos, we're crazy creative, but we need a muse. You could become that muse!

Yes, install left turn signals and Antonio Villaraigosa will no longer be known as a man who happened to become mayor and then got cold busted for cheating on his wife with a reporter.

Left turn signals will instead make Antonio Villaraigosa forever known as the man who transformed the City of Los Angeles into a world class city! (Listen to your ego like you normally do and you'll see the light. I promise.)

Paulette said…
The yield on green signals would be awesome because then you don't get stuck if you don't make the initial left turn light. Wouldn't that be glorious?
12:19 AM, November 07, 2009

Remnants of U said…
When I saw the picture before this letter, I thought oooh beautiful sunset...Awful traffic.

Florinda said…
It's a sensible suggestion, and it would have to be less expensive than the Subway to the Sea and plenty of other more hare-brained traffic-control ideas.

Liz Dwyer said…
P Font,
When I first moved to LA I was really surprised that there weren't more left turn signals. Notice how we're getting more red light cameras though. :(

Vizionheiry,
Ha! I sure should email it to them. So many people want the turn lights. I don't know why there isn't more of a demand for them.

Remnants,
It took me almost an hour and a half to get home from the westside and I kept thinking about people who spend hours in the car like that every day. It's unreal.

Florinda,
I say put the left turn lights together with the subway idea. But do the lights now because it'll be 20 years before we get a subway out to the ocean.
12:30 AM, November 08, 2009

Lisa Blah Blah said…
Oh my LARD. Let me piggyback on this to ask Tonio to do something about the intersection of La Brea and Rodeo. It has a left-turn signal, but because there is construction on La Brea between Rodeo and Jefferson (three lanes merge to two), there's always a blockage and cars get stuck into the intersection, so then you can't turn left even when there's a green arrow! Sometimes it takes me 10 minutes to get from Rodeo to Jefferson! That's one block, for heaven's sake! And I have to get to work!
3:30 PM, November 09, 2009

April said…
Sylvia wrote him a letter a few years back about a certain area in Griffith Park that she felt could use a safety rail. He never wrote back. She hates him.
8:33 AM, November 10, 2009

April,
I wish I could've co-signed her letter because seriously there are some dangerous roads up in Griffith Park. Not surprised he didn't reply to her. He probably wouldn't reply to me either. I send him tweets all the time and he never replies. He's probably sick of me complaining about the hellacious potholes on Beverly. I'm suing this city if I lose a wheel due to one.
12:49 AM, November 11, 2009