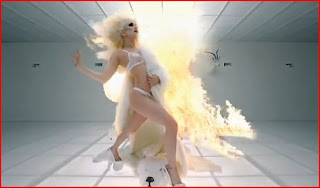 It's almost bedtime -- In fact I'm already in bed and all hugged up with my boo laptop and watching Tabitha's Salon Takeover.

I'm sure I had something serious I was going to tell you about, but I can't watch this show and think of anything profound to write about. All I can think about is that I want all of Tabitha's clothes and I wonder if she knows how to do black folks hair. I can't remember, other than the one barber shop episode last year, has Tabitha ever been in a black beauty shop?

Other pop culture mindlessness taking up space in my brain?

It seemed like the world was talking about Lady Gaga's Bad Romance video non-stop today. It's so artsy, so brilliant, so amazing. Blah blah blah. I love her remixes but stylistically she's "borrowing" lots from both Goldfrapp and Roisin Murphy -- from two or three years ago.


Ok, ok, I'll fess up. I just wanted an excuse to post that Roisin video because I love her. But I won't even get into how Gaga totally copied me.

Screw that. Yes, I WILL! Gaga TOTALLY stole the idea of putting on a polar bear dress and setting fire to a man with her bra from me. C'mon, everybody knows I do that all the time. I even won the 1st annual Queen of Los Angeles Polar Bear Dress and Flaming Bra Award.

And all of them need to eat a sandwich. Perhaps they should set a weight goal and monitor it through the scale that broadcasts your weight to Twitter.

Just wait till people start re-tweeting your weight and putting their comments on it. Or even worse, replying to you.

"@losangelista I see ur up a pound. Lay off the Trader Joe's carrot cake cupcakes & you'll b alright."

Then I'd have to reply "@azzhole I see you're up 5 pounds. Lay off eating period and die."

Yeah, putting my weight on Twitter is not the move for me. I'd probably just get gutter too quickly.

So that's what's running through my mind at almost midnight. Thank you, pop culture, for distracting me from my real life and all the serious, meaningful issues going on in the world.
Email Post
Labels: current events I know you think I'm crazy after reading this Music Pop Culture Roisin Murphy twitter Weight

Jameil said…
Did you really say lay off eating period & die? ROTFL!! I'm gonna have to pass on the scale w/twitter, too! I haven't seen a video in a long time. Even w/the craziness over Trey Songz's latest I've kept my distance. I get enough media b/t Top Chef, Runway & at least a dozen movies/week. Tabitha is awesome!
12:41 AM, November 11, 2009

Just the title of Trey Songz latest has me dying with laughter. I'm like, boy, you ain't invented NOTHIN'!