Staples Has More Than Staples 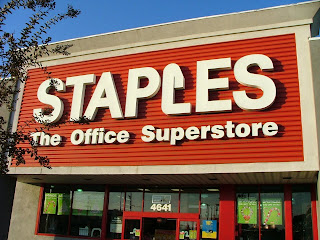 If someone gave you a $200 gift card to go shopping at Staples what would you buy? Some staples? Paper clips and some highlighters?

You could do that, but as I quickly discovered after the nice folks from Staples and the LA Moms Blog gave me a gift card to go buck wild with, there's a whole lot more you can get at your local Staples store than just staples!

My first foray into Staples happened the day after my gift card arrived in the mail. My laptop cord somehow got killed by my children and wouldn't power my computer. I called Dell and they said that since my laptop model's been discontinued I might have to wait three weeks to get a new cord. Radio Shack didn't carry it, various online outlets looked totally skeevy - and I was about to have a nervous breakdown.

But then inspiration (or was it desperation?) hit! Laptop cords are kinda office-y so I decided to call Staples up to see if they had them. It turns out that Staples has a kick-butt tech department! You can take your computer there and they'll install software, get rid of malicious spy ware or even get stuff off a dead hard drive.

The tech guy at my local Staples, Chandu, rocked the house. He had me come in so he could look at my laptop to figure out the right cord to buy. Chandu not only ordered me a new Dell cord that would work on my laptop (and arrive in TWO days) he also taped up my old cord so in the meantime I could still power my laptop!

While Chandu was taping up my cord, I 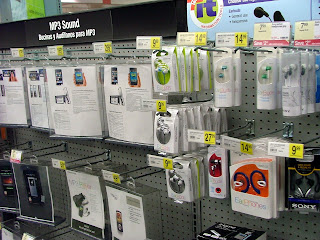 wandered around the store and discovered that I could buy printers, cameras, mp3 players, and personal DVD players at Staples. This was WAY beyond the boxes of binder clips and legal pads I'd envisioned. Not only that, they also have huge cases of toilet paper, microwaves, hand soap, cleaning supplies, 50-count boxes trash bags, and huge containers of trail mix at Staples. It was like being in Costco, except there were no crazy lines and I didn't need a special card for anything.

I was most interested in the gadgets but I never buy anything without researching it first, so I wrote down the stuff I wanted: mp3 players and and a portable DVD player for my sons. Chandu suggested I wait till the Black Friday sales to get them and I'm glad I took his advice.

On Black Friday I snapped up a portable DVD player for $49 and two high-quality but dirt cheap mp3 players, one for each son. And yes, I also bought some paper clips, batteries, new pens, ink for my printer, and, ahem, a gigantic box of trash bags because I'm practical like that! -- The best part? Even with all that AND the laptop cord, I still have some money left on the gift card!

The awesome deals aside, the thing that will make me go back to Staples is the customer service. They earned an A+ for that. If I asked where something was, the employee actually walked me to where the item was. None of that pointing and saying, "Go look in aisle three," stuff. When I had questions, the staff really knew their products and I didn't get the vibe that they were trying to upsell me.

Added bonus: No one treated me like a shoplifter by asking to see my receipt when I was leaving the store.

I hope that customer service angle is one that's not unique to my local store. If Staples keeps that up, they'll should be just fine no matter what the economy brings.
Email Post
Labels: A Los Angelista Review computers Shopping Staples technology

heartinsanfrancisco said…
I was in the Staples here the other day and the service was nothing special. I asked where to find something and the cashier waved a hand vaguely toward the aisles. Maybe I should go to L.A. for my home office needs.

Elita said…
Staples always has the best customer service. It's my mom's favorite store and she refuses to shop anywhere else for her office supply needs, even if the items are cheaper somewhere else.
7:04 AM, December 01, 2009

Val said…
Lol, I'm with Tafari. Was this one of those embedded advertisements?

Oh and don't forget to check to see if your gift card has an expire date. If it does don't forget to use it before if expires. That happened to me.
9:07 AM, December 01, 2009

Liz Dwyer said…
Tafari,
I wish I'd gotten paid to write that! Somebody should've paid me! :)

Heart,
Yes, come to LA and hit up the Staples in Hollywood! I was surprised to get such good customer service because it's really fallen off in so many places. And when you do come, make sure you let me know so I can say hi to you in person after all these years!

NYC/CR,
They were really great. It's nice to know because now I'll go there to get my pens instead of buying them from Rite Aid (never good customer service in there!)

Elita,
See, clearly I was sleeping on the awesome customer service from Staples! How did I miss this for so long?

Sundry,
I should go back to writing with fountain pens. They're sooo cool!

Val,
Nope. I didn't get paid to write this. If I did, I'd tell you all - and if I'd had a crappy time in Staples, I would've shared that, too so thank goodness I didn't. There's actually a company that sent me some stuff to review and they have been total azzholes - you'd best believe I'm going to share about it when or if I do get around to writing about it. Anyway, I wish I'd been paid to write this! Wouldn't that be nice!
10:06 AM, December 01, 2009