Are you ready for Disneyland Adventures part 2? I'm realizing that because it's pretty impossible to have a bad time at Disneyland I could go on and on about our time there. So instead I'll give you some very brief highlights.

I met my contest winner Hawiza and her awesome family! Here we are waiting for the performance of Princess Tiana's Riverboat Jubilee to start. 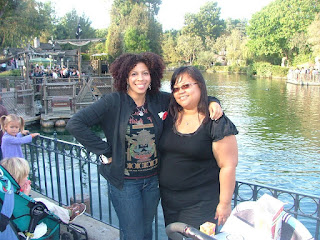 My sons had a ball playing with her daughters at dinner and they were a very cool family to hang out with. I'm so glad Hawiza won!

Princess Tiana from The Princess and the Frog: When he first saw Princess Tiana, my husband said, "Wow, she's a certified banger!" And yes, Disney's first black princess is quite lovely. We enjoyed Tiana's Riverboat Jubilee performance from a view in New Orleans Square. Here's what it was like:

We also got to meet Tiana during a special dinner the Disney staff arranged for us. 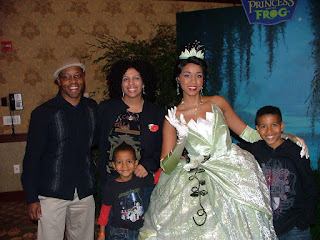 She has her poses down, doesn't she! My youngest now claims she's one of his 279 girlfriends. She's sooo pretty... I hope the rumors I'm hearing about her spending most of the film as a frog aren't true.

There are also reindeer at Disneyland - but only for the holidays! YES, real, live Dasher and Dancer and Prancer and Blitzen! 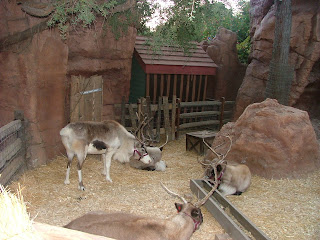 The fireworks at Disneyland are legendary - and they're even more lovely during the Holidays. (Someone I'm married to cried during them.) I also loved how Sleeping Beauty's castle is iced out and lit at night. 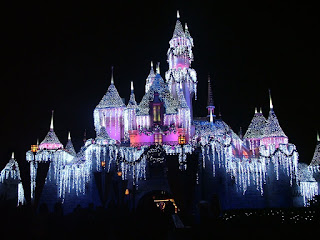 And finally, if you want to get yourself some cute holiday Mickey ears, you definitely should. They are the cutest thing ever! 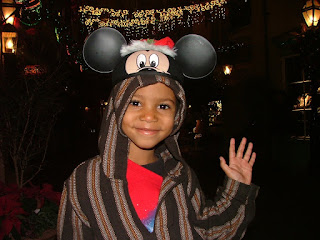 The only bad thing about our trip was that my husband lost his cell phone on one of the rides. A Disney employee called him at like 2:30 in the morning on Saturday night to tell him it had been found and to come pick it up from lost and found. Then the next day someone else called him to tell him to come pick it up, but not from the Disneyland lost and found. Nope, they wanted to meet him on a random corner in Anaheim. He went down there, the person wanted money... and let's just say my husband didn't give the guy any money but he still came home with his phone.

The moral of the story? Go to Disneyland, have fun and don't lose your cell phone!

**Thank you to Disneyland for hosting us as their guests!**
Email Post
Labels: Disney Disneyland fireworks holidays santa claus

Unknown said…
I cannot believe that the cast member tried to get money out of you!!!!!! You need to contact guest communications and let them know. That is so not right. Something similar like this went on when I was working at Dland. (In the days before cell phones were big.) He was keeping credit cards and wallets that fell out on Splash Mtn. When Dland found out they prosecuted him. This kind of thing cannot happen and needs to stop. Please consider calling. I'm sure this is not the first time this has happened. :)
12:36 AM, November 25, 2009

Phi Sister said…
Thanks for the Princess Tiana posting. I haven't been able to get up to Disney World yet, but I'm SOOOOOO excited and can't wait to see her for myself and take TONS of pictures.
11:01 AM, November 25, 2009

Liz Dwyer said…
Disneyland Mom,
I was really shocked by this too. I couldn't believe that first the guy called and seemed like a totally good Samaritan and then it turned into something not so good. I think I will let guest communications know about it. The guy could even have been pretending to be an employee from the beginning. Horrible that people do stuff like this.

Phi Sister,
We took a LOT of pictures with her. The boys are so excited about the film. I hope the Tiana show becomes a permanent fixture in New Orleans Square. It really added some nice ambiance/entertainment.
11:27 AM, November 25, 2009