The Slumdog Glitter of Millionaires 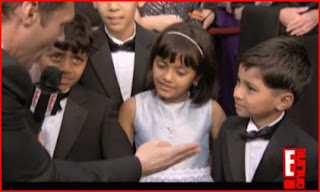 The 2009 Slumdog Millionaire Awards Show Oscars have come and gone.

As the stars walked the pre-show red carpet, I tried to forget that in the very same city that expensively decked out actors and actresses would be getting asked, "Who are you wearing?" one in five regular people are receiving public assistance.

I wonder how many people who saw Slumdog, and saw the poverty depicted in that film, thought for a moment about the poverty in their own cities? I wonder if the Slumdog children will finally get the financial compensation they deserve from the filmmakers? Three days ago those kids were still living in the slums and washing in dirty water. I bet Danny Boyle isn't going home to those sorts of conditions, is he?

Truly, it was unbearable to see the smartly-dressed Slumdog children, sweetly starstruck and absolutely excited... get dissed by Ryan Seacrest. Ryan didn't think they were important enough to know how to pronounce their names... so he did the unthinkable and held a piece of paper with their names typed on it up to the camera.


Those kids made that movie and Seacrest didn't know their names! Shame on him!

And, as much as I admired their beauty, all the jewelry being worn on Oscar night, heck, the cost of one of Angelina Jolie's gorgeous emerald earrings, could probably feed a thousand people in the slums of Mumbai for a month.

I know, it's a special occasion so why should people dress in jeans and a t-shirt? Sure, at the end of the night, those gorgeous dresses lent by the designers and the glittery sea of bling-- it all goes back into storage. But at the end of the day what do we do with the extremes of wealth and poverty on display for all of us to see?
Email Post
Labels: extremes of wealth and poverty Los Angeles Oscar's

Anonymous said…
I couldn't agree with you more, Liz. All the ostentatious flash of the Oscars is quite hollow anyway. As you say, the clothes are probably loaned and the awards are all quite arbitrary, depending on who's curried favour and produced the right commercial formula.

And the way all those ordinary folk who contributed to the film are now being patronised and ignored really shows up the hypocrisy of it all.

Actually I thought the film was production-line Hollywood cliché from start to finish - rags to riches, urban poverty, thwarted love, violence and torture etc. I don't see why it was so applauded.
1:17 AM, February 23, 2009

Liz Dwyer said…
Nick,
What I don't understand is why and how I feel compelled to watch the Oscars every single year! I have a love/hate relationship for precisely these reasons, but I still watch and I still sort of enjoy it. I contradict myself!
9:55 AM, February 23, 2009

Anonymous said…
Ryan Seacrest is a scum! I cannot believe how prejudice and stupid this is. He asked the little girl 'who made your dress?' GAAHHH!! She clearly heard his slur and was befuddled - gratefully the older kids said, "The Gap"

April said…
But I was happy about the opportunity that the screenwriter of Milk and Sean Penn got to shame the Yes on 8 voters, at least!
11:31 AM, February 23, 2009

Toni Campbell said…
Usually I am all about the red carpet and watch most of the awards, but somehow this year I couldn't get interested. As I was ironing my bland uniform clothes to go to work the next day (to a job that I am fed up with but happy to have because there is nothing else out there), I couldn't bring myself to watch all the fabulous evening wear glide by. And once I heard the Twitter comments about Seacrest, that just sealed the deal.
1:21 PM, February 23, 2009

Anonymous said…
This is one of the reasons I don't watch the Oscars. It seems liek an exercise in excess and self-congratulation. Brings out the curmudgeon in me.
3:03 PM, February 23, 2009

Liz Dwyer said…
Claudia,
Seacrest's antics make me glad that Brad and Angelina just breeze by him without giving him the time of day. Those kids seem like they have more sense than he does!

April,
I think some folks will just write off Sean Penn's speech as being just another typical Sean Penn rant. But the emotion of that screenwriter was really touching.

Toni,
I SO feel you on the not having any fabulous clothes thing. I'm going to an event tomorrow night and I've been wishing for something cute and new to wear, but no $$! I'll just be wearing same black cocktail dress I'm always wearing. Oh well!

Citizen
It definitely is excessive and make believe, as is so much in Hollywood. I think I had more fun yapping on Twitter about the awards show than anything else! :)
4:17 PM, February 23, 2009

Anonymous said…
I don't know what else the producers can do for the children. Trust funds have been set up for them to access after they graduate at 18. Basic living expenses have been provided for. The producers wired money to build a new home for one of the children. But the family still lives in the slums.

Only 2 of the actors live in slums. The rest are from upper middle class families in India. The poor families keep demanding more money, but it seems like they are just greedy.

Faith at Acts of Faith Blog said…
You know Angelina & Brad will be going to Mumbai for their next poverty-stricken not quite an orphan shiny objects child. Yeah Seacrest is a fool. Supposedly the kids will have a trust if they stay in school, etc. We'll see. There was also controversy about the casting director getting a co-director credit but applicable in India only. It was her idea to allow the kids to speak their own language and add the subtitles. They did make the film, esp little Rubina.
8:11 PM, February 23, 2009

Ms Angela said…
I lived in a Third World country, and it's so hard for people here in the United States to fully comprehend the level of devastating poverty in those countries. My parents grew up in places in the Deep South where the average yearly income for families remains way below the federal poverty level, and the situation hasn't improved since they moved away over 50 years ago. Still, the poverty in Leesburg, FL and Moss Point, MS doesn't compare to that found in Third World countries.

It's interesting to watch how our country imports our popular culture almost the same way a stripper works her audience--lures them in with a promise of "goods", but it's all flash and dazzle, no where close to the real thing. The doesn't care about her drooling patrons, but the lettuce in their wallets is of utmost importance.

Believe me, impoverished countries love and hate American flash and dazzle. They can't afford our clothes, fast food and Academy Awards show, but they still waste their hard earned cash on these things.

Are they being ridiculously stupid? No more than we are. They want what we want, and we're all being led by the nose by Madison Avenue. It's just that if I spend $6 on Mickey D's, it's not a major dent in the wallet. If someone in India spends the same amount at Ronald's, the family would be unable to eat for the rest of the month, maybe two.

Greed is somehow excused when it is exercised by those who can afford it, and despised when those who live from hand to mouth demonstrate the same human frailty. I don't need to eat at McDonald's. No one does. Yet "billions and billions" do it everyday.

If I want to do throw away my cash on fast food, it's my choice, of course. I'm an American, and I can damn well waste my money if I want to. But those in India and Somalia and Croatia better be happy poking the ground for grubs because that's all they can afford. So what if they can see the Golden Arches from the doors of their little shanties? They just have to poke more grubs to sell and pay for their fast food, that's all!
{facetious mode off}
2:34 PM, February 24, 2009

Shiona said…
I couldn't get into the Oscars either. Although I was glad to see Heath Ledger get an award. I usually like Seacrest but that was totally in poor taste.
8:44 AM, February 25, 2009

heartinsanfrancisco said…
I can't watch it anymore. The egotism, extravagance and snobbery is more than I can stomach when so many people are starving.

Call me cynical, but I find it hard to believe that Angelina Jolie is really mothering those kids she collects like Louboutin shoes. I think it's as much for effect as the emerald earrings.
6:13 PM, February 25, 2009

phoswe said…
Slumdog Millionaire has really interesting plot. Such film takes breath away. Everyone must whatch it. You can make use it http://rapid4me.com/?q=Slumdog+Millionaire
2:07 AM, April 09, 2009