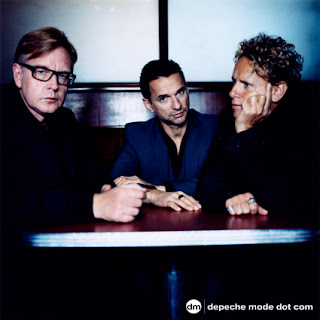 I just watched a two-hour live stream of the German Echo Awards.

Are you asking yourself, "Girl, what could possibly make you watch a two-hour live stream of the most asinine, boring German awards show ever?" (And by boring and German, I mean, it was all in German except for the occasional, "Wow! Thank You!")

There is only one reason to put myself through such incomprehensible -make my head spin around like I'm Linda Blair in the Exorcist- agony:

Thank you to the equally-obsessed German fan who ripped the live stream and put this performance up on YouTube. Let's hope EMI doesn't claim copyright infringement and pull it down in a heartbeat because I, and so many other psycho Depeche Mode fans around the world have spent four years waiting for new Depeche Mode music. Now we finally have it! WHOO HOO!

Yes, the geniuses that make up Depeche Mode, Martin Gore, Andrew Fletcher and Dave Gahan, have done it again with this song. "Wrong" has that perfect blend of lyrically meaningful darkness held together by a synth-driven heart. No one does that better than Depeche Mode. Absolutely no one.

No mistake about it, we fans have thoroughly entertained ourselves since 2005's Playing The Angel by listening to the 12 previous Depeche Mode studio albums. Oh and then there's all the gazillion remixes and bootlegs of every Mode track ever recorded. But, after awhile you want something new, fresh and amazing!

Thank goodness we are only a month or so away from the release of a new record, Sounds of the Universe! It would be an absolute understatement to say that Mode fans like me are in a complete and total tizzy of excitement. We're about to lose our freakin' minds, driven insane over the anticipation for this record.

Most of the time, so that we don't scare you, we Mode fans try to 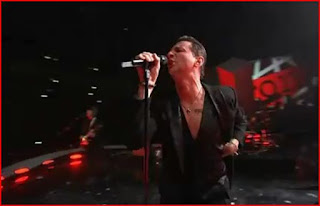 act all cool, like our love for Depeche Mode is the same as your love for Barry Manilow. But trust me, many of us could talk about Depeche Mode non-stop. If you want to talk about gangs in South Central, we can somehow bring that conversation back around to Depeche Mode. I know because I've done it!

All that cool-pose crap ends the minute a new record is about to drop, and it definitely ends when it comes to seeing the band live. Yes, a new Depeche Mode album means a new tour! (Insert your vision of Los Angelista screaming and jumping up and down right now!)

Indeed, the " Tour of the Universe" will be playing here in LA on August 16th and 17th... so if you would like to sponsor a sista's Depeche Mode concert experience, you are more than welcome!

I'm not kidding. You can even tag along if you want to come too. I may not notice you're there, but you're welcome to come experience the best band there is.

In the meantime I'm going to watch this clip over and over again just to remind myself why this has been my favorite band for the past 25 years. How can that be "Wrong" when Depeche Mode gets it so right?
Email Post
Labels: andrew fletcher dave gahan Depeche Mode martin gore Sounds of the Universe Tour of the Universe

Faith at Acts of Faith Blog said…
You are their #1 Fan and they should acknowledge you as such. Has it really been 4 years? Yeah..huh? Wow. I noticed Dave has had a little visit with Mr. Botox though. I'm looking forward to the requisite Martin lead vocal because I usually love the songs he sings.
6:52 PM, February 21, 2009

Liz Dwyer said…
Pooneh,
Oh I wish! I would have LOVED to see some of the early tours. You lucky lady!

Faith,
There are more hardcore fans than me. I was trying to figure out how I could go to ALL the California shows PLUS Vegas today and then I remember I have kids and bills and can't spend all my ducats on Depeche Mode. Oh, and I can't decorate my whole house with Depeche stuff either!

I wonder if any of them have had work done! Wouldn't be surprised!

Daniel,
That's because you told them to get up outta there! I wish the gangs in my area would just disappear. They are the worst taggers on earth!

Daniel,
Oh that's so sad that you've never heard of Depeche Mode before! Wow, I really didn't think it was possible to find someone who hasn't heard of them, but with a new record coming out, here's your chance to get to know these Depeche boys better. And Jezebel who? Are you trying to say I'm a Jezebel? ;)
1:43 AM, February 22, 2009

Anonymous said…
Have to admit I'm not a Depeche Mode fan (can you ever forgive me?). But I know what you mean about being desperate for some new tracks. I'm like that about Annie Lennox who as you know doesn't release very much. I just can't wait for her new album in March!
2:19 AM, February 22, 2009

Anonymous said…
I'm not the obsessive type, however I become obsese when DM releses a new album!! Their music always gets me!! I cannot wait much longer!!
12:35 PM, February 22, 2009

Anonymous said…
Los Angelista,
LOL! I said that “tongue-in-cheek”!
That string of blocks along S. Tarrant Ave, in Compton (right off Avalon) had like 3 shootings on it last time I was there.
I gotta know these things. Being a total “outsider” (and looking like it, lol), my well-being is involved in knowing what the locals know – when and where to “duck & cover”.
Oh, and is Hubby gonna go and revel in your love of all things Depeche Mode come August? He’s got my sympathy, lol!
3:05 PM, February 22, 2009

Liz Dwyer said…
Nick,
I am SO looking forward to the Annie Lennox release. I just saw a huge billboard for it up here in Hollywood. She's got one of the best voices there is!

Daniel,
Gosh, I know. The gangs are pretty bad everywhere these days. And my husband is used to the Mode "thing" by now. He claims he had no idea how bad it was before he married me though! :)
3:24 PM, February 22, 2009

Anonymous said…
So you like Depeche Mode? For the last few years I thought you were joking about your love for them and Orlando Bloom.
5:57 PM, February 22, 2009

Anonymous said…
GAAH!! Where have I been!! Depeche a la Mode has a new album?!?

I'm sorry I haven't been around more to revel in your joy! :)