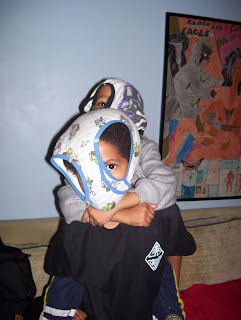 If your child ever announces to you that he or she is playing a new game called "King Underwear Head", congratulations, you are the proud parent of a total nerd.

Really, who else but nerds would create a game that requires the players to obtain a pair underwear and put it on their head and 2) chase your opponent around the house yelling "I am the true King Underwear Head!"?

Only total nerds keep the underwear on their heads while arguing over whether Abraham Lincoln is the 13th or 16th president. And only total nerds say stuff like, "Lincoln is just like Obi Wan Kenobi."

I am not sure which of these two ended up being crowned King Underwear Head, but I fully intend to print this photo out and put it away in a safe place. Photographic proof of ultimate nerdtasticness could prove very useful in the "I want to be cool" teenage years, don't you think?
Email Post
Labels: Abraham Lincoln Boys Family kids Nerds

Anonymous said…
The ad on the page was for Poise pads! You should make a large print of that photo and put it in a safe somewhere.
5:10 AM, February 17, 2009

Jen said…
We have several of those pics. We call them "first date" material...

Anonymous said…
Los Angelista,
This is so funny. Do keep the photos; in coming years they will bring back such happy memories (which can be such a help in tough times).
Sure, those pictures will embarrass them in the teenage years, but later they will love them for the record of their own lives. I’ve got one my Mom had, at about 15/16, with a big, blond ‘afro’ (remember white guys doin’ that in the late 70’s? LOL), “Saturday Night Fever” shirt (half unbuttoned, to reveal NO chest hair. Or Pecs, lol), Puka shell necklace (aka Michael Thompson of the LA Lakers); wow, what a period piece that thing is. Looked more like a human Q-Tip than anything. I love that photo so much now, as it is a reflection of much that influenced my life and the crazy/fun/stupid things I did then.
I’ve got something magnificent from my son. When he was in 8th Grade – Freshman years, he was “discovering his Blackness” and proceeded to write out this long dissertation (on the back of a large cardboard poster) about ‘how I wasn’t going to turn him into a little whiteboy; he’d be hip, gangsta, pimpin’and stylin’ the latest, rappin’ with the best’, the whole image. I have kept that poster-back (he has no idea) and plan on busting it out and reading it at, like, his (still future) Wedding Reception or something. It is a total classic piece.
Thanks again for sharing bits of your life, that make us remember the good in our own.
11:16 AM, February 17, 2009

1969 said…
I plan on showing all of the incriminating photos at their wedding rehearsal dinner on a powerpoint slide show.
11:19 AM, February 17, 2009

Anonymous said…
Oh yes these photos are definitely keepers- lock them in a safe, they will come in very handy later.
11:45 AM, February 17, 2009

sippinwineman said…
Food for thought.. . How will you feel when your clever "nerds" are playing this same game not with THEIR underpants , but with their girlfriends' or maybe (Lord forbid) YOUR UNDERPANTS?!!? Will you snap a similar portrait before or after you send them to intensive-care? lol I'm not speaking from experience. I'm just saying, though. . .
1:25 PM, February 17, 2009

Anonymous said…
I LOVE IT! As a self proclaimed nerd, I say rock on boys, rock on!

Anonymous said…
That's funny. I remember one of my boys insisting on going to church with pne of those plastic bibs from a crab restaurant, but backwards like a cape. He called himself "Super Crab."
6:32 PM, February 17, 2009

Kim Moldofsky said…
This sounds like something that would have (may have?) happened at my house five or so years ago.

Now, instead, I have my 10 y.o. accusing me just a few days ago of being a "nerd wannabe." Apparently by definition, this means I'm a dork. In our house nerds are cool and geeky moms are dorks. I'm thinking about skipping him a grade or two so he can leave for college early. :-)

Liz Dwyer said…
Daniel,
Haha love the story of your 1970's get-up! I know seeing those photos has got to take you back to a totally different world. Your son is going to appreciate those photos of him with his dissertation. How great that you raised him right so he can express himself so thoughtfully.

Yolanda,
They will definitely come in handy. Even now, they're proving to be useful. Yesterday, I couldn't stop looking because they made me laugh SO hard!

Sippinwineman
AAGH! Don't even go there! It's not going to ever happen! (I hope!) :)

Nerd Girl,
I think as they're getting older, I'm getting more incriminating evidence. What I really need to do is record what they're saying when they think no one is listening because sometimes their conversations with each other are so beyond reality that I am constantly laughing.

Citizen
That's the sort of creativity that's so wonderful about kids. I wish more adults exercised that creativity.

Dena said…
i showed this picture to emeric last night and he just shook his head (almost like in shame :). i said to him....."just you wait...you're son is not too far behind them!"

Anonymous said…
Los Angelista,
You commented:
“How great that you raised him right so he can express himself so thoughtfully.”

Well, I’ve never really thought about it like that. From the beginning I’ve just always indicated that they could communicate freely with me. Even if it’s something they disagree with me on (that grows as they grow, lol). My only requirements have always been, keep it respectful, dignified and have a point. I certainly couldn’t feel I’d be right all the time, so if something isn’t right to them, they should tell me so, properly. It isn’t a “challenge to my authority” if they present real reasons/viewpoint. Even if it is “just their feelings” on the matter, well, shouldn’t I deeply care about that?
No, I don’t tolerate ‘throwin a fit’, but honest communication, why, I wouldn’t know what to do many times if they didn’t openly tell me about their perspective and feelings. How else could I make reasonable decisions?
Nothing special there.
12:56 PM, February 18, 2009

Jameil said…
lol! it will be PERFECT for those inevitable times when they are too cool for school. lololol.
11:49 AM, February 19, 2009

Liz Dwyer said…
Sarah,
It must be a rite of passage or something. Seriously out of control!

Dena,
Emeric knows he probably did it when he was little too! Haha!

Daniel,
Exactly. Kids don't learn to thoughtfully express themselves like that unless someone models it for them. Clearly, you've done some modeling! (WORK IT!) ;)

Anonymous said…
My wife and I played that game just last night. However, we argued about about the accuracy of the depiction of India in Slumdog Millionaire.
6:06 PM, February 22, 2009

pisata said…
Recently there appeared many great movies. And one of them is Slumdog Millionaire which got eight oscars. I think after this film more such deep movies will appear.
for watching this film You may use my source download Slumdog Millionaire using torrent
8:11 AM, April 09, 2009