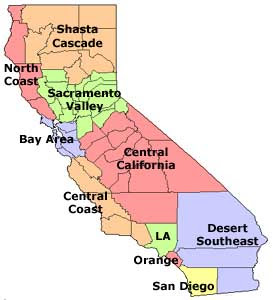 There's an old saying about California: "As California Goes, So Goes the Country".

Given that, one of the things that surprised me a bit during the last Presidential election was how relatively little attention California got from the candidates. Granted, we aren't considered a battleground state politically, but if we were a separate nation, according to the CIA we'd have the 10th biggest GDP in the world.

And so how's that California economy going?

You could put the words "hell" + "hand basket" together to come up with a pleasantly descriptive and apropos saying.

Worse than Michigan? I don't know, but here's a few things to chew on:

An unwelcome friend named Drought has come and overstayed his welcome. It's winter and Drought's nemesis, Rain, is supposed to be visiting. The problem is that hot, summer-like weather is keeping Drought around.

What does this mean for you? Without rain, all those fruits and vegetables you like to eat are going to shrivel up and dry. We grow a whole lot of them. So much so that I'd bet you money that the lettuce you're eating was grown in California. No rain = farmers abandoning their fields. Abandoned fields = smaller crops. Smaller crops = higher prices at the grocery store.

Yes, you will need a few more dollars for your grocery store kitty if rain does not appear in California's Central Valley.

Oh, and drought also sets things up for those awful fires every fall. Remember, the fires that cost a gazillion dollars to fight and destroy homes? Remember how at one point it seemed like all of Southern California was on fire?

Then there's the housing crash. Everybody was wigging out today over the LA Times story about crashing prices on the Westside of Los Angeles. The story proclaimed, "Home prices in Beverly Hills, Santa Monica and Malibu -- which continued to soar well into 2008 -- finally tanked at the end of the year, losing between 26% and 30% of their value in just a few months, the latest data show."

How could home prices in the enclaves of the Los Angeles gentry actually lose value? It's mind boggling! That was only supposed to happen in other areas of the city!

What else? Our unemployment is officially around 10%, although unofficially, who knows what it could be. I know a lot of out-of-work people right now, sadly enough. And, because our State is so broke that an approximately $42 billion deficit is projected, they're delaying tax refunds to people and demanding that state employees take furlough days.

The furlough days would mean that around 238,000 state employees will not get compensated for the 1st and 3rd Friday's of the month. Countless state offices (like the DMV) will be closed on those days.

Interestingly enough, this past Saturday, I talked to a woman who is a state employee. She shared that her boss was insisting that she'd still have to come to work on those furlough days, whether or not she got paid. That sounded absolutely insane. How could her boss demand that she come in and work for free? But she said she was told that if she didn't come in, she'd be written up.

In this economy, who wants to be written up?

I wonder, wouldn't it make sense to make California a little experiment? If we really do have that much influence, just think, if things can be fixed here, wouldn't it make things better for the rest of the United States?

If not, I worry about what else could happen out here. Maybe you should too.
Email Post
Labels: california economy housing Los Angeles real estate

Anonymous said…
Well, those are new tricks I hadn't heard of, delaying tax refunds and asking you to take "working holidays". Don't tell the UK government, they might think they were fabulous ideas. Here the popular thing at the moment is short-time working and closing factories for a few months. But whatever they do, people are hurting badly.
2:11 AM, February 03, 2009

Anonymous said…
My state has been in such a mess for years that this recession hardly even seems like news. It's getting worse all the time though.
3:51 AM, February 03, 2009

Shiona said…
Yeah I heard about the IOU on the tax refund. When can people expect to see it? Next year? Pretty sad. As for the DMV I was unpleasantly surprised to see that when I went online to make an appointment. And here I thought they were still open one Saturday each month.
9:04 AM, February 03, 2009

BZ said…
One of my girls, who's a social worker out there, told me about the furlough days. Madness.

Liz Dwyer said…
Nick,
I've read about some of the protests and strikes that have been going on across the pond and it definitely looks like people would love to string up your leaders. These are crazy times, for sure.

Citizen,
Yes, I was chatting with someone this morning who told me that several other states are adopting furlough days as well. People can't afford to have less income but they'd rather have that than not have a job at all.

Shiona,
Who knows when the state tax thing is going to work itself out. I think I owed state tax a couple of years ago. How would they have liked it if I'd been like, oh, sorry, can't get it to you and I don't know when? That would've been crazy!

BZ,
Yes, there is some serious audacity going on when people can go to jail for not paying the taxes but the state can just say, sorry, we're not giving what we owe to you!
12:03 PM, February 03, 2009

Phi Sister said…
Not only is the weather in Florida droughting, it's also frosting. However, we grow a heck of a lot of foods, too. It's becoming so bad this year. And with this drought watch the fires come, just like y'all.

April said…
I don't know if you read my post the other day, but I mentioned that I think the every other Friday thing is just the absolute worst day. There are people who work 4-day work weeks or part-time that use their Fridays to take care of their personal business.
And I really don't want to get started on the IOU of my tax refund, thanks.
But the thing about the woman who was told she'd be written up if she didn't work?!? She needs to go over her boss' head and have HIM written up!
2:05 PM, February 03, 2009

Jen said…
Maybe you DO have it worse, and to make it even worse-worse, we're stealing the film industry.

But there was an announcement of the start of "Motown Films" in one of the closed auto plants and that branch already has the Marvel contracts. It's connected with one of the big studios, though.
6:27 PM, February 03, 2009

Liz Dwyer said…
April,
Good point about folks who have Friday's off not being able to handle business now. I also read today that they're not covering basic social services or paying cal grants because some budget deal wasn't reached by the end of January. So yes, we're broke as a state. Unbelievable.

Faith at Acts of Faith Blog said…
It's all Ah-nold's fault. See he was supposed to come in, with Kennedy wife in tow and fix CA. Instead is unqualified self messed it up worse than ever. $42B is a freakin' disgrace. I also blame all the star-struck fools that voted for him. I hope they're happy! I really can't hide my contempt for him. He's on Twitter by the way and I've sent phone calls, email and Tweets telling him what a horrible Gov he's been and he deserves to be sent packing - except that would cost about $25M which the state doesn't have. My only caveat is that the Bay Area voted against him 80-20% unlike the rest of the state which was closer pro 80%. Again, no more "celeb" Repubs, sons of Presidents or daughters of the Tundra. They're a disaster in office.
6:10 PM, February 04, 2009