I'm sitting here doing something I don't normally do: I'm watching the 11:00 news.

You see, I've been trying to find out what happened this afternoon that caused the police to shut down the busy street down the hill for two hours. There was a huge police perimeter, all four lanes were blocked off for a few blocks and cops were swarming everywhere. Traffic was snarled and backed up like crazy. But does it make the TV news? Nope!

Was it a shooting? A robbery? A really bad car crash? I have no idea! I guess too much other stuff just happens in Los Angeles for a "little thing" like a street getting shut down due to police activity to even matter.

What did is my local news reporting about? Local election results.

Yes, today we voted for our mayor and city council. I don't think the general population really cared though. When I went to vote at around 3:30, there had only been a measly 50 people at my polling place all day long. I think we're expecting like 5% turnout. That means more Angelenos watched that ridiculous Bachelor reunion show last night than went to vote today.

Now they're reporting about how today is Square Root Day because it's 3/3/09. By the way, if I have to explain the math to you about why it's called Square Root Day, well...I have no comment on your mathematical deficiencies. Just know that you may want to brush up on that.

OK, the news is over. I guess I'll have to settle for having no idea what happened that shut the street down. Is this a sign that I need to move to a smaller town? You'd best believe that if something serious enough happened to shut down a major street for hours in someplace like Santa Barbara, it would make the news.

While I'm mulling that over, I'll just be grateful for the photo I took after I finally managed to squeeze through the sea of honking cars and exit my driveway: 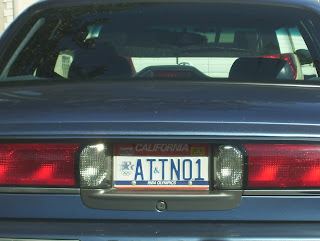 You know the economy is bad when folks are advertising AT&T on their license plates!
Email Post
Labels: elections In the News Los Angeles neighborhood police Politics Traffic voting

A little (black)girl went missing 5 miles from my house last week and it was not on the news. The only reason I knew about is the Pastor at the Church I go to talked about it.

But you know what they did talk about?

That girl that went missing in D.C. EIGHT years ago.

Ian Lidster said…
Even in smaller places, like where I live, many things happen that the public isn't informed about. Might as well stay where you are.
10:09 AM, March 04, 2009

Ms Angela said…
Stealth. That's how you find out what's happening. If you stand quietly and watch long enough, you'll find out what happened. The key is to think of yourself as invisible, the proverbial fly-on-the-wall trick. It worked for me when I was doing news reporting. It isn't getting the story quickfastinahurry, so other reporters wouldn't do it. But I worked for a weekly, so I could.

David Sullivan said…
The Bachelor is definitely a sign that the apocalypse is upon us...there has never been a more shallow show...well, maybe O'Reilly...
1:47 PM, March 04, 2009

David Sullivan said…
The Bachelor is definitely a sign that the apocalypse is upon us...there has never been a more shallow show...well, maybe O'Reilly...
1:48 PM, March 04, 2009

Liz Dwyer said…
Daniel,
LOL, You're trying to torture me! :) Yes, I'm pretty hungry right now! Why does it seem like food is everywhere when I can't eat it?

Dirty Red,
Yeah, that story has been all over the news out here too. The stories of our black girls and women are rarely told and yet the story of Chandra Levy was everywhere 8 years ago AND today.

Ian,
True... and sometimes in smaller places the media is so biased that you only hear certain stories anyway.

Angela,
I know, isn't Daniel naughty to tease us non-eaters!was thisclose to walking down the hill to see what was what, but the cops had that, "You will get shot by SOMEBODY!" look on their faces.

David,
I watched one show of the first season of The Bachelor and just found it to be utterly gross. How in the world would I marry somebody I know has been kissing all on other people? Just nasty!
1:56 PM, March 04, 2009

Jameil said…
l.a. is too big for a non-multi death incident or many multi-car traffic backup to make the news. i thought the plate said attention 1. i'm still not convinced it's att but that doesn't make me less confused.
12:41 AM, March 06, 2009

Liz Dwyer said…
Kimberly,
I'll bet some advertisers have thought of that before, having cars tricked out with neon flashing lights that say, "Yo quiero Taco Bell!" or something!