Why Don't You Want To Be Mexican?

Ah, a beautiful spring day in Los Angeles. Don't you wish you were here, too? Because if you were, you could have joined me in eavesdropping on these two young ladies: 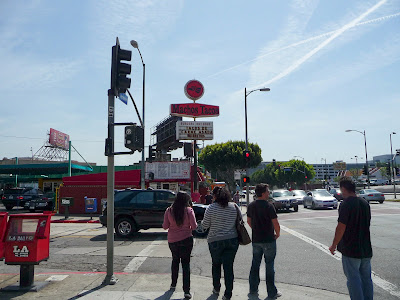 I mean, how could I not notice them, especially when the one in the pink sweater loudly declared to her striped-sweatered friend, "I would rather die than be Mexican."

And she continued to share, "Is it really so f****ing hard to tell I'm Armenian?"

Ah yes, the terrible tragedy of being mistaken for another ethnic group... would she have been bothered if someone had assumed she was... Irish? Or French? Or is it only bothersome to be assumed you're from an ethnic group you, and the rest of the general society, think is inferior?

Yes, in Los Angeles, for this young lady, and surely for so many others, being thought of as Mexican is worse than death.

Oh, and the icing on this crazy cake? I watched her sashay her behind right across the street to Machos Tacos and ORDER!

TKTC said…
As much as my first response to this person is a seriously pointed sideways look and an accidental tripping, I feel like living inside a mindset like that has to be punishment enough.
11:30 AM, March 27, 2009

Anonymous said…
Los Angelista,
Well, with all that B-hind she got hangin' out there, what's the problem? Lol, I hope I'm not too bad for that! I just think "people (sigh)" … sometimes ...
Then she goes to Jungle Tan to get brown, lol!

Oh, and HEY! I think I accidently know that corner! Now, had you just come outta the Starbucks across the street, with a Chia Tea Latte in your hand? I usually don’t go north past the 10 (Santa Monica FWY) on Vermont, I get scared … too many white people.
LOL! That was bad too … must be my day.
11:34 AM, March 27, 2009

Anonymous said…
Oh, and TKTC, I think the EXACT same thing. About all kinds of stupid people. Once watched with the kids some bozo just go OFF in traffic on somebody. The kids and I discussed how his whole life is probably punishment enough, to be like that. Imagine ruining every relationship, friendship, job, whatever, with such lack of self control and total non-respect for the dignity of others. Life would just suck being like that. So, TKTC, right wit ya!
11:39 AM, March 27, 2009

Anonymous said…
Perhaps she imagines she is eating Mexicans lol! I don't understand how people can make crass generalisations about whole populations and not realise how moronic they're being. Hey, wakey wakey, we're all individuals, we don't get up every morning and put on our national stereotype. Clothes are sufficient.

Jameil said…
love that this falls under "what a heffa"!!! the worst is that she went to order the food anyway!! she should leave L.A. if she doesn't want to be mistaken and really??? is it so hard to tell you're armenian??? who has met more than 2 aremenians (if any)???? hilarious in all its ridiculousness. like so foolish it's funny.
1:06 PM, March 27, 2009

Unknown said…
You always make me fall out of my chair onto the floor in hysteria!! THATS dangerous!!!

Too funny. I don't know if you are like me, but i embrace whatever it is folks think I am...good or bad...

did I tell you about walking down Halsted and Armitage after 9/11 with my mom and young son and a blond haired guy on a bike yelled "f**ckn Arabs" after I realized who he was talking to (its amazing how you feel about yourself in your head)I poised myself for a good conversation for my then 5 year old on why we should respect everyone cuz ya never know who your talking to!

Now, let's just say THAT guy (yeh, "that" one) now has a new definition on what ghetto beat down is! I am sure he is afraid to yell out at anyone for fear they might be from the South Side!

Pearl said…
I love it and am with Citizen of the World on this -- perhaps she'd really like to be offered that option! Mexican or Death.

On the next Maury show.

sippinwineman said…
I so cannot laugh at/with this post. I've had co-workers, former members of the US Military given hard times on flights because of their skin color, really.

Oh wait. . .I'm reminded of an episode of "Cheers" when Coach was studying for his GED, or something like that. He turned his lessons into song to better remember. (sung to 'When the Saint go marching in') "Armenia! Armenia! You border on the Adratic. Your Gross Domestic Product is. . . "

Shiona said…
Is it so hard to tell I'm Armenian. Really? What agreat twis of irony that she goes and walks off to a Mexican restaurant. Clearly some more brain power is needed by her. I fully agree with the commenters that being in that head is enough of a punishment.
10:01 AM, March 28, 2009

Liz Dwyer said…
TKTC,
I almost tripped when I heard her say this! It is a punishment for her personally but since our thoughts become our actions, I wonder how her sentiments play out in her day to day interactions.

Daniel,
LOL! You are too funny! Yes, you definitely know that corner! I had parked at the Starbucks and then walked to the dry cleaners a little bit up the street. I had planned to get my chai but got so distracted by these two "ladies" that I forgot. C'mon, don't be scared of my neck of the woods! From the whispers I hear, the neighborhood is changing!

Nick,
There is a lot of Armenian/Latino tension here in LA and it's a shame because both are great cultures. I don't know what she imagines but it was just priceless that she walked across the street and ordered Mexican food!

Jameil,
This counts as hands down heffa behavior in my book. We have the largest population of Armenians outside of Armenia here in LA so there are a LOT, especially in this part of the city, but she would've probably been totally geeked if someone had thought she's Italian. Just racist!

House,
What in the world!!! Yeah, out here after 9/11, everybody was complaining that they were getting mistaken for being of Arab descent. I'm cool with whatever you think I am because we are all one human family and it makes sense that folks from different backgrounds might look alike. It only takes two seconds to say, no, I'm not Dominican or no, I'm not from Egypt.

Citizen,
Ooh, that would make an interesting episode of Tales From the Darkside or Twilight Zone, wouldn't it?

Pearl,
Can't you just see her getting grilled by Tyra? And then Tyra would fling her blond weave over her shoulder and ask, "Did someone hurt you when you were a little girl?" Oh goodness...

The Joy,
LOL! All I could do was snap their photo with my brand new camera. If I fake like I'm on the phone, chances are it'll ring! :)

Faith,
It's one of my MOST favorite words. Has been since I was little!

Sippinwineman,
Folks say or think stuff like this all the time and do NOT think they're racist. She probably thinks of herself as being totally tolerant.

Liz Dwyer said…
Ms. Wooden Shoes,
I sure did! I let them walk by me and then "click"! I couldn't think of a better way to capture the moment. After they walked to the taco stand, I was too stunned to take another photo. Wish I had.

Shiona,
Brain power and some more heart. But it's like back in the day where folks would eat the food their slaves had prepared. There's just a disconnect...and it's SO weird to me!
12:34 PM, March 28, 2009

Ian Lidster said…
A lot of good insight here, Liz. Ah, the depth of some young females. I remember when I was 18 I went to spend the summer in Santa Clara with a high school friend of mine who had moved there. For the first time in my life I heard derisive comments about Mexican-Americans. It confused me and all I could wonder was "why?"
11:00 AM, March 30, 2009

Liz Dwyer said…
Renee,
Total mess... they need to be on the next episode of Tyra!

Ian,
I'm sure there are a LOT of folks around who think this same way, even if they don't say so. But it's funny that younger people tend to think they're more "tolerant" than their parents as far as race goes. Not always the truth, clearly.
2:09 AM, March 31, 2009

Lisa Blah Blah said…
Hey, I recognize that corner! I used to be a regular at that car wash on Tuesdays when I worked near there. Never ate at that taco stand though.

Back to the subject at hand: WHAT? People are so frackin' ignorant. And yes, we do have a large population of Armenians here in LA, but a lot of people in LA aren't from LA, so not everyone is familiar with what an Armenian looks like (whatever that means). She is just a hot mess.
3:09 PM, March 31, 2009