Who's Roxanne Shante Getting Revenge On Now?

Back in 1984 a Brooklyn based hip-hop quartet known as UTFO came out with a song called "Roxanne, Roxanne".
In the song, the members of UTFO diss a girl named Roxanne. To them she's "stuck up"' because she won't give them any play.

The song was everywhere... until a response from a teenager from Queens, Roxanne Shante, stole it's thunder.
"Roxanne's Revenge" skillfully dissed UTFO left and right for their misogyny. The song became a feminist anthem for every hip hop fan with an x chromosome who was tired of being called names if she didn't like being hollered at by some random guy.

"Well, my name is Roxanne, a-don't ya know
I just a-cold rock a party, and I do this show
I said I met these three guys, and you know that's true
A-let me tell you and explain them all to you:
I met this dude with the name of a hat
I didn't even walk away, I didn't give him no rap
But then he got real mad, and he got a little tired
If he worked for me, you know he would be fired
His name is Kangol, and that is cute
He ain't got money, and he ain't got the loot
And every time that I see him, he's always a-beggin'
And all the other girls that he's always tryin' to leggin'
Every time that he sees me, he says a rhyme
But, see, compared to me it's weak compared to mine
A-every time I know that I am sayin' somethin' fresher
In any category I'm considered the best
And every time that I say it there ain't nothin' less
And everybody knows I will win the contest"

However, by the early '90s, hip hop had changed its sound and style, and Roxanne Shante largely dropped out of the spotlight. I hadn't heard anything about her at all until last month when I came across a story written by freelancer Walter Dawkins and published on the New York Daily News web site.

The title of the story was so compelling, so heartwarming. "Rapper behind 'Roxanne's Revenge' gets Warner Music to pay for Ph.D."

According to the story, Roxanne Shante was now Dr. Shante, with a Ph.D. in psychology from Cornell -- and all paid for by her former record label, Warner Music.

Warner hadn't paid up out of the goodness of their hearts. Someone brilliant had thought to put a clause in her recording contract stating that Warner would have to pay for her education for eternity. I found myself wondering if more artists could do the same because there are too many tragic stories of former stars falling on hard times because they were cheated by their record company.

I was so happy and inspired by Roxanne's success that I read the entire story out loud to my husband over the phone and, like so many others, posted it to my Facebook page and shared it with my Twitter community. I even enviously thought to myself, wow if Roxanne Shante from the Queensbridge housing projects can go get a Ph.D. from Cornell, what the heck is my problem.

Meanwhile, a lawyer and journalist named Ben Sheffner also read the Roxanne Shante story. But instead of getting caught up in the feel-good vibe, he decided to investigate it more deeply.

Last night on Twitter I asked him why he decided to dig into the story.

He kindly replied back, "I'm an attorney, and I knew that record labels simply don't contract to pay for artists' education for life. And as soon as I started digging, almost every "fact" in the Daily News story turned out to be false."

Indeed, Sheffner went on to do the kind of fact checking that we all assumed the Daily News reporter had done -- easy stuff like degree and psychology license verification.

However, as Sheffner details in yesterday's piece for Slate, "Roxanne's Nonexistent Revenge", Shante has, according to Cornell's records, never even been enrolled there. And that contract with Warner? She never had one of those, either.

Did Roxanne Shante (her real name is Lolita Shante Gooden) ever even go to college?

Yes, she was enrolled at Marymount Manhattan College for a few months but dropped out without finishing her degree. 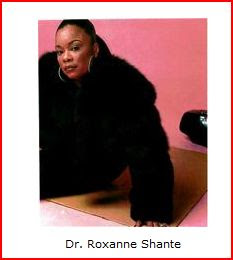 Dr. Roxanne Shante is as much a doctor as famed West Coast rapper and producer Dr. Dre. But that hasn't stopped her from captioning photos like this of herself from her Myspace page, "Dr. Roxanne Shante".

As Shakespeare so eloquently wrote over 400 years ago in The Merchant of Venice, "The truth will out".

It begs the question, why would she do this? Who's Roxanne Shante getting revenge on now?

Does she have mental health issues? Was it all a ploy to make money? Did she think we'd respect her less without the Ph.D.?

Questlove of the Roots shared the following on his Twitter: "Peep. 90% of hip hoppers lie to us. Was this an bad ruse? Of course. We can demonize her for lying about her PHd. Or we help."

I can't deny the anger and disappointment I felt after reading that Shante lied, and sure, maybe she needs more help than criticism at this point. However, I also can't buy into the argument that I should expect to be lied to, especially by someone who's an icon in a culture that's built its foundation on the premise of keeping it real.

I hope Roxanne will keep it real, come forward and explain to us how it came to be that she got "Dr." attached to her name. We knew back in 1984 that Roxanne Shante has courage. Now we just need to know if she'll tell us the truth.
Email Post
Labels: black girls black women feminism hip hop In the News Lies MySpace Roxanne Shante sexism twitter

Mrs. Sowell said…
I wonder why she lied too. We all lie every now and then but why be so crazy to go forward with this story if you know the truth could come out one day. Why should we have to help? I don't think she has mental issues. She's human and lies just like the rest of us for selfish reasons. I however can man up and offer explanations for my white lies...I always viewed her as tough even though she is way before my time. I hope she does step up and squash all of this. I am human and I can relate but I can't help if she says nothing.
6:00 PM, September 03, 2009

I get the feeling that there's more to this story. I'm not sure what but this seems like too big a lie to tell without having some sort of truth in there somewhere.
6:49 PM, September 03, 2009

Anonymous said…
She's repeatedly kept the lie going for some time. I saw her on The Bridge in 2008 sharing the same tale -- http://tallulahbankhead.wordpress.com/2008/02/page/2/

On the one hand, I realize the damage of her lie is minimal in the grand scheme of things. On the other, I'm wondering what made her believe such a fiction was necessary to her self-esteem.

Also, I would love to hear from Walter Dawkins and his editors at the Daily News why they were so easily duped.
6:59 PM, September 03, 2009

nick said…
A sad story of someone who feels outrageous lying is the only way to boost her self-esteem. I don't think this was just a trivial invention, it was a serious attempt to con thousands of people. She definitely needs a bit of time with a therapist to sort out her troubled psyche.
1:35 AM, September 04, 2009

Nerd Girl said…
I hadn't heard about the label record "paying for her education" until recently. But. I have watched the Top 100 Hip-Hop Songs on VH1 more times than I should be comfortable admitting and Roxanne was like "yeah, I went to school and got my PhD...." I am just shocked that she would perpetuate such a bold-faced lie. Not speaking up about a lie someone else has told about you is one thing (kinda), but to just out and out lie about having a PhD is all kinda crazy. Strange, strange story.

Have a great weekend!

Jameil said…
Sounds like to me she just wanted to get in the news. But it was absolutely the non-fact-checking of the reporter AND his editor that even got this in the news in the first place. How do you not contact Warner for comment on a potentially libelous story like this? This is exactly what I'm telling students not to do RIGHT NOW!!
8:50 AM, September 04, 2009

Liz Dwyer said…
Mrs. Sowell,
Everybody does lie sometimes, unfortunately, but this is just an over-the-top lie! I'd really like to hear from her about all this. I always think it's better to just speak up and say what happened.

Mes Deux Cents,
I'd like to think there's something more to it as well, because it does seem like too much to lie about, but maybe it just is what it is. It won't be the first time someone lied about something like this.

Anonymous,
I've heard she's said she has a Ph.D. from Cornell in various TV appearances. I know she said she used an assumed name to escape a domestic violence situation, but I don't know if it's even possible to enroll in a university like Cornell under an assumed name. I want to hear from Walter Dawkins and the editors, too.

Kris,
Ooh, VERY interesting. I agree that artists SHOULD all have these sorts of clauses in their contracts. But did she think no one would ever expose it. If not Sheffner, someone else would've done it eventually. The question IS why is it OK with consumers of hip hop that lying about a prison record is alright or lying about selling drugs is OK. And why do record companies promote that image and lifestyle? I have my big picture answers for that. But in the end, it seems that Shante still bent the truth and she didn't need to. We loved and respected her regardless.

Nick,
I'd love to see her come forward and write something about her motives/what's really going on with her. It's a shame.

Nerd Girl,
Isn't it a strange story?!?! I can't stop thinking about it. Would make a good TV movie... if movies on TV featuring black characters actually got made, that is. :(

Jameil,
Agreed, the lack fact checking is ridiculous. They probably figured VH1 fact checked so it was the truth.
10:43 AM, September 04, 2009

Shiona said…
OMG! Such a heartbreaking story. I've been looking up all of these links now. I can totally understand feeling the need to lie to build yourself up but at some point I decide it's better to actually go about doing something positive to build myself up instead.
9:45 PM, September 04, 2009

Liz Dwyer said…
Shiona,
That's a great way to think of it. You can spend YEARS lying about yourself or to yourself. At the end of it, you have nothing left but a lie. But if you put that effort into making it happen, that's a different story. With a MUCH happier ending.
1:57 AM, September 05, 2009