Hole To Feed: The Depeche Mode Apocalypse Is Here 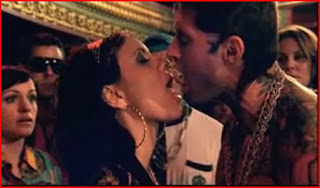 What's a Depeche Mode fan supposed to do when the band she loves puts out a product so horrible she becomes convinced the apocalypse is about to go down?

Y'all know I love Depeche Mode, so for me to say that today I feel slightly pained and embarrassed to be a fan of a band that would put their stamp of approval on something so positively nauseating -- well you know it's got to be the End of Days if I'm saying that.


I can't believe I just embedded that on my site. I feel soiled.

If the link to that hot mess hadn't been on the official Depeche Mode web site I would've thought it was a really bad fan-created video -- a video made by some asinine hack with mother issues who sits around lasciviously licking a Barbie.

A video made by someone who wants no one on the planet to like either the song or the band itself.

I have no problem with cheesy, or kinda boring videos from Depeche Mode. I can even do slightly creepy. But this travesty of a video for a song that I could only marginally tolerate in the first place?

Just imagine what the actors said to themselves in order to psych up for the video shoot.

"I really need to pay my overpriced Los Angeles rent so FINE, I'll lick someone else's tongue in this crappy Depeche Mode video."

Clearly, the band members are not in the same desperate financial situation because they aren't even in the video.

Maybe they were PMS'ing that day and just felt waaay too bloated to be on camera. Maybe they felt old and they weren't into how HD makes every freakin' wrinkle show up and wave hello to the audience.

Or maybe they were legitimately too busy touring to shoot a video. If that's the case, how about don't make a video, period? There's no reason to say, "Hey, crappy director, do whatever you want for a video. Our fans won't mind!"

Fan reviews on the official site are not favorable. Put the director, Eric Wareheim, in a room with some of the more seriously ticked off fans and he'll be lucky to escape in one piece.

I'm praying this video is a case study in what happens when a band listens to managers, handlers and marketing idiots instead of really owning ALL aspects of their creative process and image.

If it's not and the band actually came up with the concept and was whole hog behind it, let the Four Horsemen of the Apocalypse ride because my gawd, the thought that my favorite band in the whole world might actually like this video... it's killing me!

Lenina said…
I'm praying this video is a case study in what happens when a band listens to managers, handlers and marketing idiots instead of really owning ALL aspects of their creative process and image.

You have said it all with those words. It's so confusing when the band becomes ACCESSORY and not the principal player in the music biz.

The saddest for me is thinking they don't seem to care about the fans anymore. Then what is it? Money? I doubt it. Popularity? I don't know.

This is certainly the lowest DM has ever gone. It's not the video itself, but what it means or represents. I will love their music forever, and will forget about this thing. It never happened. I never saw it.

Miss Leliel said…
>>I'm praying this video is a case study in what happens when a band listens to managers, handlers and marketing idiots instead of really owning ALL aspects of their creative process and image.<<

This. SO MUCH. I was thinking about blogging about this video myself. Lately I've really been wondering if the band just passively listens to what people tell them is good for them and lets whatever go because somebody says it will. They have great artistic sense - they should know shite when they see it.

Sadly I think Dave is the only one who's made a habit of making an issue of things he doesn't like, but he's rather understandibly down and out with the numerous health issues, tour toll, etc...

Lenina: I think the band cares about the fans in general, though I think the boards might be generating some ill will. They do know what people say there, and I wouldn't blame them for being upset over some things. However, I worry they may lose sight of the fans that are reasonable and above all, fiercely loyal.
5:00 PM, September 25, 2009

Oh my. I'm sorry your favorite band is putting you through this. I know what it's like to be disappointed with your number one fave.
7:12 PM, September 25, 2009

Liz Dwyer said…
Lenina,
I wish I could forget it. At least I don't eat hot dogs, but the mustard... I'm traumatized.

I think they care about the fans, but I they probably have total fools telling them that fans will respond positively to stuff like this video. I can't see it being about money or popularity with them.

Amanda,
Yes, they should know pure crap when they see it, which makes this video all the more baffling to me. I don't understand who they thought this could possibly appeal to. I could sit and try to analyze it for some deeper meaning, but I can't because I'm so disgusted. If Dave's voice against such things as this is slightly muted because of health issues, I'm afraid of future videos/songs.

I couldn't agree more, and it's great that you've retained your own good judgment despite being an ardent fan. A thinking fan - what a concept.
5:39 PM, September 26, 2009

Unknown said…
this video is BAD! "wrong" was a pretty good video but this is horrible.

Liz Dwyer said…
Heart,
There are some fans that claim they like this video, but they are few and far between. I just can't co-sign on this travesty!

Kristen,
This one is worse. At least in that one there's no mustardy tonguing!