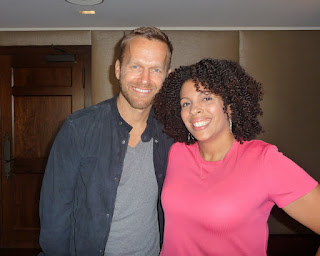 This morning I took my first ever yoga class and wowzer, guess who my instructor was? The fabulous Bob Harper, trainer from the hit NBC show, The Biggest Loser!

How did I get so lucky?

Bob's partnering with the Grain Foods Foundation on their new campaign the "Daily 6". They're trying to teach people that despite what the no-carb/low-carb diet people tell us, whole grain foods are not our weight loss enemy. As a part of their educational efforts, the Grain Foods Foundation invited a few Los Angeles area bloggers to come workout with Bob... and I was one of them!

Before we got to the yoga workout, we sat around, ate a little breakfast and talked about fitness with Bob. He made me laugh right off the bat by joking about the latest wack low-carb diet he's heard of, the so-called "Paleo" diet. The point of this diet is to eat like a caveman!

I'm not sure if spearing a wildebeest for dinner is optional or not but seriously, why would I eat like that when, as we all know, I'd just gain all the weight back when I go back to eating a normal, balanced diet.

It is possible to still lose weight and be healthy, even if you eat bread or pasta. You just need to limit your grains to six servings a day. Yes, good ole portion control and remembering that ice cream is not a whole grain food!

Bob also shared some good tips on recession friendly free places to work out. For all of us Los Angeles people, he suggested trying the killer (but free!) Santa Monica stairs or going to Runyon Canyon. But Bob pointed out that no matter where you live, it doesn't cost a penny to go out and walk around the neighborhood.

I asked him what he thought about rates of obesity in the black community, particularly those of black women. He acknowledged how in the black community, we like our ladies with meat on them. Being able to see someone's clavicle or backbone because they are so thin is not considered attractive at all. However, when type 2 diabetes is reaching epidemic proportions in our community, we can't keep justifying or making excuses about our obesity. There's big boned and then there's getting to the size where you wonder how someone's bones can hold all that weight up!

Bob also kept it real when he talked about what it takes for the Biggest Loser contestants to take the weight off, the struggles they have with keeping it off, and how no, exercising six hours a day is NOT realistic.


Yes, he's just as sincere and down to earth in person as he is on TV. And I can testify that his tattoos look crazy cool in person and he's got an awesome gold skull ring with two rubies as eyes. I would've jacked him for it but seeing as how he can probably bench press me, I figured I didn't have a chance.

Right before we started the yoga part of the morning, I confessed to Bob that I'd never done a live group yoga class (doing a 10 minute one on Exercise TV twice a year doesn't count). Sadly enough, I have a phobia of group exercise classes because a dozen years ago I fell off a step bench during a relatively easy step aerobics class...and even the instructor laughed at me!

But the way Bob said, "You have to get yourself into a group class!" made me believe that I could do one and it would be OK!

How was he as a trainer? Tough but really encouraging and fun. He's got great music and he never made me feel bad about myself if I was a little wobbly (OK a lot wobbly) on some of the poses. On the drive home I was feeling muscles I'm not sure I've felt in awhile, but I found myself totally wishing Bob could either adopt me or train me every day.

In the hopes that I get the chance to work out with Bob again, I entered a little contest to do so... and I guess I'll give you the chance to win it, too.

To win the chance to work out with Bob, too, enter the Get Going with Bob Sweepstakes! You can win a free trip to L.A. and a one-on-one session with him. Good luck... except I'm going to win so don't get your hopes up too high!
Email Post
Labels: Biggest Loser Bob Harper diets eating right exercising Grain Foundation

D- said…
Man, I don't know who he is (or what the Biggest loser is, doesn't come on in france) but damn that man is cute!!

Lisa Blah Blah said…
Liz, there are a ton of great yoga places near you! If expense is a concern, many of them offer community classes at least once a week or "donation-only" classes where you give what you can. Since the community classes are at different times at different studios, I have a feeling you could take yoga a few times a week for cheap if you like it. (shh, a well-kept secret) Email me if you want recommendations...
11:48 AM, September 24, 2009

heartinsanfrancisco said…
Wow, what a fun thing to do! I've never watched the show because I hate reality TV, but I would like some realistic tips on getting more fit and staying that way.

Liz Dwyer said…
Lisa,
Some of those yoga places seem SO intimidating! But I would love some community or donation classes because budgets are tight but I'd love to take another one. Just as long as the people are nice and not too hipstery. ;) I'll email you because I really think doing yoga could be good for me!

Heart,
The ruby ring was to die for! Realistic tips are what I need, too, not just the quickie fixes disguised as reality!
12:30 AM, September 25, 2009