It's Labor Day Weekend, the last weekend before school starts, and my sons are camping out in our living room. 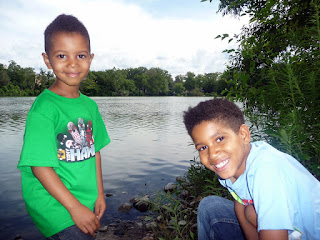 Earlier tonight they constructed a tent out of four chairs and three sheets. They also have two sleeping bags inside, a whole bunch of pillows and a stash of oranges, chocolate and graham crackers. And a flashlight.

Every once in awhile one of them says something like, "Do you see that coyote over there hiding in the bushes?"

It is definitely imagination overdrive, and I wouldn't have it any other way.

It has been such an amazing summer with my two sons, and goodness, we've done a LOT. We started it off on Memorial Day with them cheering for me as I ran the Los Angeles Marathon. Whoo hoo!

Then we took a trip to Santa Barbara, went home to see family in the Midwest for a month, came home, chilled at the beach, marveled at the magic and acrobatics at the Ringling Bros Circus, spent a fantastic day at Disneyland, and went to our first-ever Dodgers game and our first-ever WNBA game.

We've been to a fun Nintendo event at the La Brea Tar Pits, a taping of the PBS show Dinosaur Train and picked out new clothes during an awesome back-to-school shopping spree at Old Navy.

But these moments like this, where it's just us at home, listening to music all night and they're camping out in a tent... these are the things I cherish most. These are the times I know are going to be etched into my memory forever.

Goodbye, summer vacation. Thanks for moments like this.
Email Post
Labels: back to school Family kids Love summer Vacation

Jen said…
I'm so glad you've all had this wonderful time together. It doesn't always stay this way. Sigh.

Sundry said…
Yay! Thanks for taking us along. What a wonderfully summery summer you've had. Love the living room camping. Those things stick with kids. Well done, Liz!
9:32 AM, September 05, 2009

Liz Dwyer said…
Jen,
Sigh, I know the day will soon come when they'll be moaning about wanting to hang out with friends instead of their mom.

Sundry,
The tent has been enlarged and expanded. Wow, it really has been a wonderful summer. Seriously wonderful!
3:43 PM, September 05, 2009

heartinsanfrancisco said…
Your sons are so beautiful, Liz! I hope all their dreams come true, and that they both get wonderful teachers this year.