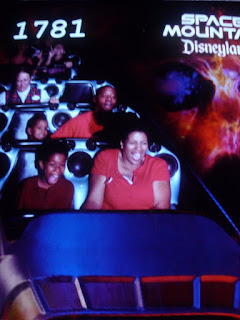 I can't believe I'm actually posting this insanely embarrassing picture of me screaming. However, I'm choosing to see the upside:

1) I'm pre-empting any possibility of blackmail.
2) It's a public service announcement because now you know what kind of pictures you'll be taking if you go hang out at a fabulously-tricked-out-for-Halloween, Disneyland, and it's sister park next door, California Adventure.

My family and I spent this past Saturday and Sunday at both parks as invited Disney guests and the experience has definitely put me in the Halloween spirit. Everything at the park was decked out in festive fall colors with lots of pumpkins everywhere. I think I may finally be inspired enough to get it together and take the St. Patrick's Day decorations off the door!

So why the screaming while riding Space Mountain Ghost Galaxy? Well, it's kinda like the Space Mountain you know and love, except that it's MUCH darker inside and a pretty terrifying ghost chases you while you're riding the roller coaster. Click here for video footage to see what riding it is like.

My always trying-to-be-cool five year-old son rode once, and then declared he didn't want to ride again because, "I think I'm over Space Mountain. It just doesn't do it for me anymore."

Yeah, right. A little boy "over" a roller coaster? Whatever. He was scared! On the other hand, his eight year-old brother was even more eager to ride multiple times and kept trying to tell me I was soooo brave to ride with him.

My trying to live up to that "brave" label must be how I also got talked into riding California Adventure's Twilight Zone Tower of Terror with both boys. I had no choice since my husband refused to get on board because it's a totally spooky "drop" ride where you're traveling up 13 stories in a cage elevator and then are dropped at speeds that can go over 35+ mph.

The verdict? I thought I was going to die! Seriously, after riding, I had to sit down for a few minutes to, ahem, collect myself! No amount of, "That was awesome! Can we do it again?" from my sons could sway me to give that one another go around! Maybe next year, fellas!

For all you vegetarians, I found a tasty food option for us! Saturday evening we ate dinner at The Big 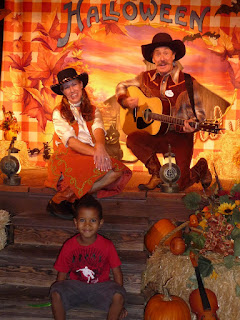 Thunder Ranch Barbecue. I'd always avoided this spot since barbecue doesn't necessarily sound veggie friendly. -- If you get queasy when you're around meat, don't look at the good-sized bucket each table gets filled with baked chicken, ribs and sausages. If you don't eat pork (my family doesn't) definitely ask first so you don't have the ribs rubbing against your baked chicken!

As for me, initially I figured I'd only eat the corn on the cob, cole slaw, baked beans and cornbread. Carb heaven! But it turns out the restaurant serves some really tasty barbecue tofu and veggie skewers. Score!

The other cool thing was that they have western-style entertainment while you're eating. My kids loooved the acoustic guitar player and singer -- and how happy was I to tell them that this is country music, not Taylor Swift's poppy tunes! There's even the opportunity for kids to get up on stage and "perform" with the singers -- which one of my little hams did a couple of times.

I couldn't get on stage at Big Thunder Ranch Barbecue because, um, how weird would it be for a grown woman to get on the stage with all the kids? But I was definitely in a dancing mood. So, on Saturday evening, I tried (and failed) to convince my husband to engage in some amateur swing dancing with me at the Disneyland Carnation Pavilion. The dancers were so entertaining to watch. I particularly love the older couple working it out on the dance floor!


Aww... SO romantic! But, my husband chickened out on me since he said we needed to go grab our seats for the Fantasmic performance. Mmm hmm. Sure...

I don't know how I missed the show "Fantasmic" on my previous three trips to Disneyland, but wow, it brought the spooky factor times ten thanks to a showdown between evil Queen Maleficent and our imagination hero, Mickey Mouse.

Just like in Sleeping Beauty, Maleficent turns into a terrifying, fire-breathing dragon... because obviously, no one has given her the number of a good therapist! Seriously, homegirl has some issues she needs to work out!

My five year old wasn't too scared of the dragon because he was too busy demanding, "I want a churro. I haven't had one in soooo long!" His begging had me joking that there needs to be a "find your nearest churro dealer" app.

After I bought him one, I asked him if I could have a bite... and he proceeded to lick the entire thing. Clearly, we need to work on our sharing skills.

The evening fireworks at Disneyland are always great but they're especially a must see over the next month. For a limited time they're featuring Jack Skellington from Tim Burton's The Nightmare Before Christmas. That's my eight year-old son's favorite movie -- so you KNOW he went bananas. We watched the fireworks on both Saturday night and Sunday night.

Saturday night we stayed at the park till it closed at midnight because we didn't have to drive home. Thankfully, Disney generously put us up for the night at the Paradise Pier hotel! I have to tell you, after an enjoyable day at Disneyland and California Adventure, it was SO nice to be able to head to a bed that was a mere three minute drive from the parking structure. Much nicer than being so tired you want to pull over to the side of the road on the 5 Freeway and take a nap.

Indeed, I was so tired, and the bed was so comfortable, I sat down on it and fell asleep instantly. Yes, in my clothes! 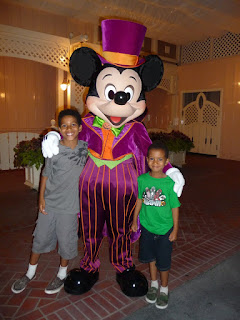 I didn't want to stay for the fireworks on Sunday night since I didn't want to get home too late, but my son begged and begged. He just had to see Jack Skellington again! I finally gave in, but only because LAUSD didn't have school on Monday due to Yom Kippur.

My five year-old doesn't care at all about Jack Skellington, but he does love Mickey Mouse a whole lot. His moments with Mickey were the ones that let me know my little boy is still a little boy. I loved it when he'd throw his arms around Mickey and tell him, "I love you, Mickey!"

My other son is clearly growing up. He says things like, "So how come Mickey doesn't talk? That isn't really Mickey Mouse is it? There's an actor inside that suit, isn't there?"

Why do they have to grow up so fast?

All in all, it was a fantastic two days but the best thing was that I really got away from any stress in my personal life, all the terrible things in the news, there were no dishes to wash, no laundry to do. I just got to enjoy myself and make some great pre-Halloween memories with my family! It's been hard to figure out what to share with you without writing about this for hours because we really had such a great time.

I've got lots more Disney fun and goodwill to share with you, including a new program that's celebrating the spirit of volunteer service, and, down the line, a super-duper top-secret surprise that I'm dying to tell you about but I can't. But it'll be good, I promise!
Email Post
Labels: Disney Disneyland Family Halloween Vacation

jOoLz said…
oh great. i live 2 mi west of disneyland and i already dread 9:30pm every evening because of the fireworks. you're saying it's going to get worse?

Ehav Ever said…
I have recently started doing videos on YouTube on a group of topics for an initiative I am calling A Month of Positive Solutions (A.M.O.P.S.). You can find the videos here.

A Month of Positive Solutions

The topics are:
1) Defending the Honor of Black Women
2) Strengthening Black Men Through Nationalism
3) Erasing Racism From all Jewish Communities
4) Peace in the Middle East

The Chronicles of Ehav Ever

I will be posting them for the entire month.

Kathy Sena - Parent Talk Today said…
So great to meet you at Disneyland last weekend, and I loved your post! So much fun. The churro part was a hoot, and I love your screaming photo! Good stuff. Hope to see you at Christmas!
8:52 PM, October 01, 2009

Liz Dwyer said…
Ehav Ever,
Nice that you're doing a serious on positive solutions. They surely are much needed.

Kathy
So nice to meet you as well! My boy was SERIOUSLY killing me with the churro begging and licking! He loves those things! :)

Kristen Howerton said…
Ha! My kids are ALL ABOUT the churros at Disney, too. We can't leave without the churro! But I really don't mind because I think it's the cheapest treat in the whole park. I usually try to sneak in some healthy food. Good tip on the BBQ place having tofu - who knew?
8:22 AM, October 02, 2009

Liz Dwyer said…
Kristen,
LOL, they're magical Disney churros! So true, they are a bargain compared to other stuff.

Stephanie said…
I, for one, think your "insanely embarrassing picture" is super cute. You look like you're having tons of fun. :)

The Halloween Time event WAS fun, wasn't it? We had a phenomenal time. Disneyland really is a magical place.

I look forward to getting to know you better in November...

Unknown said…
We had a lot of fun hanging out with you guys!!! Your boys are great and your husband was patient with all of the boys' antics. Can't wait to see you at the holiday event.
6:13 PM, October 08, 2009