My Sons & Violence Against Black Males 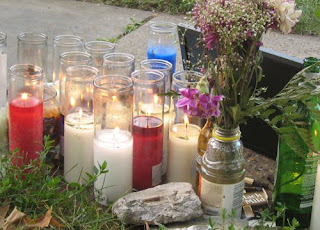 Earlier tonight I was talking with someone about the murder of Chicago teenager Derrion Albert.

It's been a week since his murder and I still refuse to watch the video of it. -- It's not a made-up episode of The Hills or Real Housewives of Atlanta. It's true reality, a real teenager being murdered. No reason for me to watch what's essentially a snuff video.

Yes, I know, people who watched helped identify the assailants. But I wasn't there. I'm not going to be able to identify anybody. Therefore, I have no reason to watch aside from sheer voyeurism.

The first time I read about the murder, I immediately thought about what I would do if something like this happened to one of my own sons. Such thoughts really scare me.

As my sons get older, I feel more afraid. They are closer to being teenagers. Closer to being targeted by both cops and gangs. Targeted by peers who want to prove they're "somebody" in a society that has taught them they're nothing but thugs.

I'm not being paranoid.

Violence against minority school-age children in general has seriously plagued Chicago this year. Derrion's murder is the 36th murder of a child or teen in the city this year, and I really wonder, as Secretary of Education, Arne Duncan wondered two years ago, what would happen if 36 kids in Chicago's wealthy suburbs got murdered?

And what about Los Angeles?

"Los Angeles, California, notorious for its gang problems, is larger than Chicago. It has reported only 23 child slayings this school year."

Is there such a thing as "only" 23? What would happen if 23 kids in Beverly Hills, Pacific Palisades or Brentwood got murdered? We can't even imagine that, can we?

So will this be the straw that breaks the back of indifference to these crimes against children of color? My immediate response is a cynical one: No.

The conversation is already going through that revolving door where the blame falls on black people, particularly lower income black people, as if they single-handedly created the pathologies that are at work in their communities.

Honestly, I don't want to read not one more blog post or Bill Cosby missive about how this is all the fault of promiscuous black single mothers and absent black fathers. It's deeper than that, and it's deeper than it being the fault of the generic "white man" too.

As for having some sort of moral or spiritual "center" where today's teens know not to beat one of their peers to death, that sort of center doesn't just fall out of the sky and infect kids like Swine Flu. Yes, children and teens should know better, but we live in a do-whatever-you-wanna-do culture. Self-control is in no way a part of our world these days.

I'm not saying this to excuse what these teenagers did. But hello, didn't you read Lord of the Flies as part of your education?

Speaking of education, almost every article I've read has referenced Derrion being an honor student. Yes, he was, but that's not the main reason his murder is such a horrible thing. His grades are not the only reason his life had any worth. Even if Derrion got straight F's his murder would still be an absolute travesty.

I have more questions than answers in this situation. And I come back to my own two sons. How would I feel if that was one of my own boys? Devastated. Unable to function.

I don't want to think about it. If I think about it too much, I'm going to pack my boys off to the middle of Montana where their only contact is a fictional swan with a trumpet.

nyc/caribbean ragazza said…
I haven't been able to stop thinking about Derrion Albert's murder and I can't watch the video.

I don't know what the answer is either. Something is very broken in too many of our communities and it breaks my heart.
8:16 AM, October 02, 2009

Liz Dwyer said…
NYC/CR,
I couldn't believe that the video was posted on so many news web sites. What's broken can't be fixed overnight, but I sure wish it could be.
10:38 AM, October 02, 2009

Unknown said…
Liz, you always nail the internal instinct right on the head-I know we have discussed this quite a bit, but the phenomenon seems to keep growing.

Our boys(and mine is now a teen) are walking targets for so many things: police, angry others who don't like blacks, gangs, their own peers and circumstances.

I like you did not watch the video...we all know how it ended.

Liz Dwyer said…
House,
It makes me so sad, too. How do you let your son out of the house every day without freaking out? These boys get it from all sides, from everywhere. Makes me feel like the only real safe haven is our homes.

Brown English Muffin,
If 23 kids in Brentwood got murdered over the course of a year... the national guard would be patrolling the streets. If there was even ONE murder there, parents would get increased policing and there'd be a real examination of what's going on. Not so for children of color in other parts of the city.
11:50 AM, October 02, 2009

Sharifa said…
My heart goes out to his family. My husband is getting really homesick for the US, but so much has changed in the past decade, and when I read these kinds of things I am not sure I want to raise a boy there.
12:20 PM, October 02, 2009

Liz Dwyer said…
Sharifa,
I know how you feel. Sometimes I actually fantasize about us packing up and moving back to Guangzhou! You know it's sad when you figure your kids will be safer halfway around the world.
12:43 PM, October 02, 2009