I Got Chocolate Milk For Halloween! 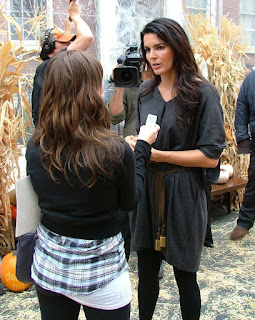 Last Tuesday night -- the day before my entire family descended into I-don't-know-if-this-is-swine-flu-or-normal-I-feel-like-dying-flu hell -- we attended the very fun and fabulous Got Chocolate Milk? Halloween event at Paramount Studios.

It was the first event I've been to this Fall that really put me in the Halloween spirit. Even the weather cooperated because it was raining, cool and windy. With all the decorations - pumpkins, trees with red and gold maple leaves, bales of hay and an old fashioned cemetery, I felt like my family had been transported back in the Midwest on a drizzly October afternoon!

The event was to celebrating chocolate milk being the healthy drink of Halloween, and actress and model Angie Harmon unveiled her own Got Milk? milk moustache ad campaign. I was totally in love with her when she was on Law & Order and I just don't think the show has ever found anybody who really fills her shoes.

My husband's in love with Angie Harmon too. He almost never wants to go to any blogger events with me but the minute I told him Angie Harmon was going to be there, he was all, "Can I come?" He was hovering around staring at her until I pointed out to him, "Hey, there's Angie's husband!"

Yes, Jason Sehorn was there setting bales of hay on fire with his smokin' hot looks. I sooo wanted to sneak a picture of him but just could not gather the courage to do it! But those two are a seriously good looking and NICE couple if ever there was one. I took a picture with Angie but I can't share it with you because the photographer didn't hold down the button long enough to focus the lens. Oh well, if I ever need it, I have blurry proof that I did really meet Angie Harmon!

Anyway, while I was marveling over Angie's amazingly beautiful skin, my youngest son spent most of his time hovering around a witches cauldron full of bottles of chocolate milk. He was trying to convince me to stuff all the bottles in my bag so we could take it home for him to drink because he doesn't believe in drinking plain milk. He won't even put plain milk on his cereal. But he loves chocolate so chocolate milk is his drink of choice.

To distract him from suggesting such hoodrattish, "That blogger came and stuffed all the chocolate milk in her bag!" behavior, I took him and his older brother trick-or-treating along part of a street in the "New York" part of the Paramount lot. The houses were decorated with lots of bats, skeletons and cobwebs. Put one of these skeletons on your front porch and your house will be the talk of the neighborhood! 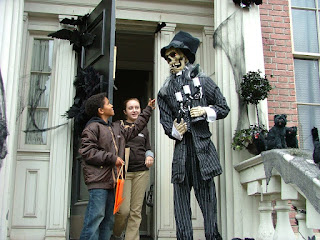 Everybody might be too scared to come up on your porch, especially at night, but at least it'll look good!

After the trick-or-treating, a magician did tricks for the kids, there were arcade games, a photo booth and there was face painting -- it only took the makeup artist five minutes to do up son's entire face like Spiderman! 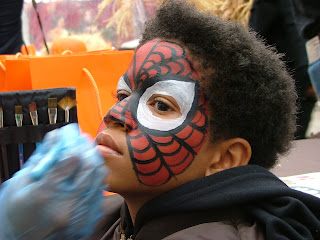 It would probably take me 50 minutes to replicate this same Spiderman look, and I'm convinced my version would still come out looking totally jacked up.

Once my son was all painted up, he spent a lot of time trying to scare me by popping out from behind the gravestones in the "cemetery". Why do kids think it's fun to try to scare their parents? And is there more of this, "Let's give mommy a heart attack!" behavior in my future?

Just writing about this event totally puts me in the Halloween spirit! I sooo can't wait for next Saturday!

Lisa Blah Blah said…
I've met Angie Harmon a couple of times and I have to say she is very down to earth and real. And of course, ridiculously beautiful. I love her new ad campaign!
11:23 AM, October 23, 2009

Not anon anymore said…
It sounds like a bunch of fun. You are so lucky you get to go to all these fun events.
BTW, Angie Harmon is a Fox loving, Obama hating Republican. Don't let the smile fool you LOL.
9:29 AM, October 27, 2009