Can I Run The Nike+ Human Race 10K EVERY Friday Night? 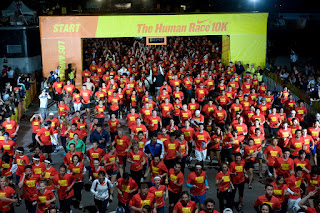 I'm finally home from my second Halloween party of the night -- a real wild kiddie party, mmkay -- and I keep thinking how last Friday night was SO much more exciting than tonight, all because I was running the Nike+ Human Race 10K.

Technically I was running on Saturday morning since the race started at 12:01 a.m., but that's just semantics. Friday night/Saturday morning -- The important thing was that it was crazy dark out there. (I know I have a comic-addicted house when I think it must've been my spider sense that kept me from tripping into any potholes!)

Anyway, if you're asking yourself, "Los Angelista, why in the world would you go running in the street at a time of night when most folks are either home in their beds or still getting their freak on at the club?"

1) I like to run: I like to run so much that I ran the 10K, slept two hours and then got up and put in 16 MORE miles with my running club. (Yes, you read that correctly.)

2) I like being a part of a unifying movement: Hundreds of thousands of people across the globe were participating in the Human Race and I like anything positive that brings us all together in pursuit of a common cause. Really, it was SO cool to have people from such far away places as London and Berlin replying to my Twitter posts wishing me luck and saying they were running the race later in the day!

3) It benefited charity: USC coach Pete Carroll's charity A Better LA received a portion of the proceeds from the race registration. Even though I know the Notre Dame fight song by heart, I'm 100% down for supporting any organization that has promoting peace and unity within Los Angeles as it's mission.

4) Nike asked me if I'd like to run it: Seriously, when Nike emails and asks if you want to tweet/blog about a positive, socially-minded worldwide running event, what's there to say no to?

Little did I know that saying yes meant that Nike would send me gear to race in: running tights, shoes, a jacket, a hat -- heck, they even sent a sports bra! I was not expecting Nike's generosity, and wow, I was STYLING when it came time to run!

They also sent the Nike+ Sport Kit, which probably would've been great to track my run stats on, but I couldn't get it to work on my iPod since the poor thing is on the fritz. I ended up sticking with my trusty Garmin watch for tracking purposes.

The race itself? I was excited about running but I'll admit I was a bit apprehensive. I'd had a fever of well over 100 that Monday and still wasn't feeling 100% healthy in the hours before the start. It was also the first race I've ever run by myself. I've always managed to drag someone else along for whatever race I'm doing, but no one I knew was willing to come out and run with me at midnight.

The race began and ended at the LA Coliseum, right next to USC, so most of the folks running were USC students. As I waited for the race to start, I seriously felt like a granny next to all the students. My self-esteem wasn't helped by the race officials bunching the 11 minute mile and slower people all together in one pack. I started to worry that all the 18 year-old runners in booty shorts were going to leave me behind and I'd be the last one to hobble across the finish line.

The first mile or so it was impossible to run faster than a slow trot, and I ended up walking a bit, because it was just WAY too crowded. There were too many people starting all at once and I half expected someone to get trampled because of all the pushing and jostling. However, after mile one, a lot of people slowed down and started walking so I was able to pass folks and get into a good running rhythm.

We zig-zagged on the cross streets a bit, but the route basically went up Figueroa Street from the Coliseum to the Convention Center and back. There were a few just so-so live bands and some fab DJs along the route. I absolutely loooved hearing the Crookers remix of Kid Cudi's "Day 'N' Nite" vibrating off the concrete as I ran under the 10 FWY. 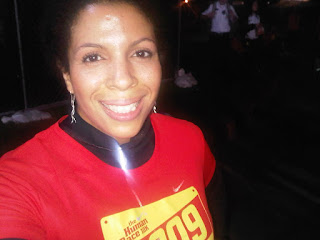 few hours later, but I finished the race in 1:12 - I snapped this picture of myself right after I crossed the finish. Not too bad for an old lady!

It wasn't till I was waiting to catch a cab home that I noticed someone else wearing a medal. I'm not sure how I missed that those were being given out to finishers, but oh well, medal or no, I really enjoy crossing finish lines. I always feel so accomplished!

You know what else Nike generously gave me? Tickets to the USC vs Oregon State football game and the Human Race pre-game tailgate. I took my eldest son and we had a blast. Great food, tons of bags of my favorite potato chip, Popchips, DJ Diplo was there and he was awesome... well, except for all the cuss words and n-words in the music he was mixing. Oh, and I didn't really need to see half-drunk USC students attempting to Crip Walk to one of the old Snoop Dogg records he played. I'd love to see what those students would do if they had to go live in a Crip neighborhood for a week. But it was a good time and there's nothing like a little college football to make it really feel like fall.

Now you see why tonight feels a little unadventurous in comparison to last Friday? I can't wait to do the Nike+ Human Race next year. I need another excuse to run in the streets at night!

Unknown said…
Wow that sounds really cool, I wish I was so good at something I could get a sponsor! Sounds like you had a great time!
2:03 PM, November 01, 2009

Liz Dwyer said…
Sundry,
I never would've imagined I'd fall in love with running like this. I was telling someone the other day that I'd never run over 3 miles till a year ago!

Kristen Howerton said…
Ooh, that sounds fun! I may have to try that one next year. There is something appealing about night running.
9:40 PM, November 03, 2009

Liz Dwyer said…
Kristen,
VERY appealing to run at night because there's no burning sun making things miserable. I ran Monday and yesterday morning and was boiling in the sun!
10:45 AM, November 04, 2009