Blame It On The NyQuil 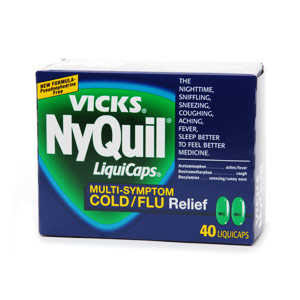 Joy of joys, the child who barfed on me has successfully passed along his germs. Now I have an entire house of sick people, including yours truly.

It hit me like a brick -- one minute I was fine and then a couple hours later I had a fever well over 103. I haven't had any desire to eat solid food since sometime on Wednesday. Yep, me not eating means I'm definitely sick. Do I have swine flu? Regular flu? Balloon boy flu?

Speaking of Balloon Boy, I briefly woke up from my NyQuil-induced coma to see the footage on the news. At that point the balloon had landed but Balloon Boy was nowhere to be found.

An alien spacecraft-looking balloon with a missing boy is not the kind of thing someone who's taken NyQuil needs to see. -- I swear, that stuff makes me hallucinate like crazy and I wasn't sure if what was on TV was real.

I fell back asleep pretty quickly but my husband says that for the next few hours I kept mumbling, "Oh my gawd! Balloon Boy wasn't in the balloon!"

He claims he told me several times, 'They found Balloon Boy. He was hiding in the attic."

I don't remember that. All I know was that I was having some seriously trippy dreams about my grandmother riding in the balloon with Balloon Boy and laying into him with a switch.

Come to think of it, maybe the Louisiana justice of the peace who denied the marriage license to the interracial couple had just taken some NyQuil. The man had to have been under the influence of something since he was clearly hallucinating that he was back in 1960.

"I have piles and piles of black friends. They come to my home, I marry them, they use my bathroom. I treat them just like everyone else."

Just. Wow. Did anybody give him a drug test? A breathalyzer? Because even though there are plenty of folks that agree with this justice of the peace, they don't usually say it out loud!

And his "think of the children" bullcrap? I'm sooo sick of that argument. There's nothing wrong with the children of interracial marriages/relationships. I mean, look at me. I turned out alright, didn't I? (You better say, "Yes!")

Thinking of this latest furor over interracial marriage reminds me that yesterday I'd intended to write about the continued drama over transracial adoptee, Zahara Jolie-Pitt and her hair, but then the fever attacked, I took some NyQuil, and it was curtains for me.

Thankfully, fellow blogger 1969 handled the whole thing beautifully. Go read what she has to say. Can I get an amen up in here?

Speaking of kids, if you haven't yet entered my Disneyland VIP Giveaway -- because you're on the fence over the idea of free Disneyland tickets for you and three family members -- it ends tonight at 11:59 p.m., Los Angeles time.

Someone actually complained to me that I'd made the entry process too difficult. "You should've just made it a comment entry and that's it."

Oh really? Becoming a Los Angelista fan on Facebook, sending in a picture and writing a VERY brief paragraph about why I should take you and yours to Disneyland FOR FREE is hard? Why do folks always want something for nothing?

There's also a cool giveaway going on at FruFrugal's site where you can win free tickets to the Aquarium of the Pacific in Long Beach or to the scary Halloween event on the Queen Mary. If you are looking for some Halloween scares, that's definitely for you.

Alas, I should probably say goodbye since I just took more NyQuil about 15 minutes ago.

It says on the box, "Do not operate heavy machinery". Ha! It should just say, "Prepare to lose your grip on reality." Seriously, if you take this stuff, don't make any plans to do anything or go anywhere.

D- said…
NiQuil you is very snarky :D
That said, I agree completely with your friend's post about Zahara's hair. That article in Newsweek is what will give that girl a complex about her hair, not anything else. And I'm glad (even if it's not of my business) that they're keeping her hair natural.
9:19 AM, October 16, 2009

Liz Dwyer said…
D,
Yep, imagine Zahara reading scans of those magazines in the future. So hurtful! I figure her hair isn't designed to lay flat against her head and that's OK if it doesn't.

As for the NyQuil... I rarely take it because it affects me so forcefully. Really, the past 24 hours are quite hazy!

Nerd Girl,
And now the news out here is tracking down Balloon Boy's daddy's landlord from when he lived in Burbank and was trying to get his acting shine on. She was on the news talking about how he was dirty with roaches and owes her back rent. Sigh.
2:45 PM, October 16, 2009

heartinsanfrancisco said…
First of all, I hope you and your family feel better soon. I had to laugh at the idea of the Balloon Boy saga being attributed to Nyquil, though. An understandable mistake. As for the detestably misguided Louisiana judge, I can only shudder in disgust and point out that we are nearly all of mixed ancestry in this county: It's one of our great strengths. 1969 is right-on about Zahara's hair. It's lovely, and while I'm not a huge fan of her parents in general, they deserve credit for not torturing a little kid for the sake of an artificial hairstyle.

Jameil said…
"Oh my gawd! Balloon Boy wasn't in the balloon!" Lololol! That story was too much SANS nyquil! Clearly we all loved the piles and piles of black friends in his bathroom the best! it's so amazing/typical. You don't want to do some East Coast giveaways? Lol.
10:52 PM, October 17, 2009

Liz said…
Ugh, I know what you mean! I have a house full of sick kiddies. My 2yo is here in bed with me. The flu has come to my home. Ahhhhhhh!

Liz Dwyer said…
Heart,
The boys are definitely on the mend and my temperature is below 100 so I think I am, too! Whoo hoo! As for the Balloon Boy drama, those parents seem a little off but it still seems hard to believe they'd makes such a hoax up! -- I had no idea this was the case but I was looking up NyQuil side-effects and apparently lots of folks actually drink a lot of it to get high. Crazy!

Nick,
Thanks! I'm feeling much better. Yep, people have been on Angelina over that little girl's hair since day one and I highly doubt that'll let up anytime soon.

Jameil,
Ha! I'd love to interview one of those piles of black friends to see what they think of that justice of the peace now!

I do need some East Coast giveaways, don't I? :)

1969 said…
Thanks for the link love. That whole Baby Z thing makes my blood boil. She's just a kid. Did her hair really deserve an article in Newsweek? Really?

As for the Balloon Boy...I wish your Grandma was whipping his butt with a switch in the balloon. LOL

Did you see him throwing up on the Today show the next morning? Maybe you are onto something with this Balloon boy flu.