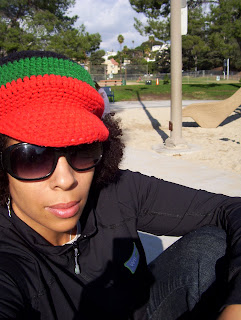 I think I have a food hangover. Was it all the olives I ate? The cranberry sauce? My candied sweet potatoes? The cornbread stuffing?

I don't know, but my body feels a little weird. And I think it's showing. My seven year-old son said, "You look kinda sick, Mommy. Let me take your picture."

Thank you, son, for your blatant honesty.

He happily snapped my photo and went back to jumping all over the playground equipment. I sat there feeling like I needed to get up and go run around the park track for the second time today. Yes, I already went running once. Two hours later, I did a workout DVD. I still don't feel quite like I should.

And no, I did not go buy anything today because it's Buy Nothing Day. I'm not, and have never been, one of those people who stands outside Wal-Mart (or any store) for 10 hours, waiting to buy stuff made in overseas sweatshops, and then trampling a worker to death.

"He was bum-rushed by 200 people," said Jimmy Overby, 43, a co-worker. "They took the doors off the hinges. He was trampled and killed in front of me. They took me down too...I literally had to fight people off my back."

That's insane. I hope the family sues Wal-Mart and all the tramplers because they were caught on video. And if you couldn't tell, I have not bought anything in a Wal-Mart in 12 years. Once I found out about some of their shady practices, how could I, in good conscience, keep going there? Seriously, just say no. You, your wallet and your credit cards will be happier.

The only reason I'm leaving my house today is to go see my Dad! His plane landed three hours ago but he's napping at his hotel. We're going to meet him at his hotel in a couple of hours and then we're going with the Notre Dame band to a pep rally in Anaheim. Not sure if the team is coming. At least there's no snow here so the players don't have to worry about getting pelted by their own students with snowballs. Should be good times.

Anonymous said…
Los Angelista,
I think the green/red knit hat is, 'how you say', "fly"?

On another note ... I wonder if those 'bum-rushing' Christmas shoppers were yelling "Peace on Earth" too, while they killed the poor guy. Gotta love this season …
6:16 PM, November 28, 2008

I just shook my head when I heard about that Wal-Mart incident. Sadly I wasn't even surprised. There was also a shooting at a Toys-R-Us in Palm Desert today. Is this killer capitalism?

Lisa Johnson said…
Love the hat! I never shop the day after Thanksgiving either. I pretty much did nothing all day. I did make it to the treadmill for a bit though. I hope you and your Dad have a great visit!
10:10 PM, November 28, 2008

Jen said…
We don't do the Walmart thing, either, after finding out about their "employment model".

I didn't participate in buy nothing day because there was something my mom actually needed that was on sale, which we bought online. I actually really hate shopping and feel that the world would be a much better place if there were far fewer things in it.

April said…
That Wal-Mart thing was freaky - but I think the store was more responsible than the customers. One ONE employee in front of the doors? That's insanity.
8:35 AM, November 29, 2008

nyc/caribbean ragazza said…
I just posted about the poor WalMart employee. I'm with you. I have never shopped there and I never will.

I woke up, ran and did a Jillian Michaels on demand workout. LOL
I am in the proces of packing up all of the desserts and dropping them off at friend's houses.

If it's any consolation....your face is looking very skinny in that picture. I can tell you have lost weight from the running.
10:31 AM, November 29, 2008

Sundry said…
I heard about this program in which a woman in Philadelphia gets homeless people running, and your post about needing physical activity get right with the world made me think of it. http://backonmyfeet.org/main/index.html

Oh, and my own Buy Nothing/Drive nowhere day collapsed in a heap when I had to drive 220 miles round trip to retreive a set of keys I'd left in Orange County on Thanksgiving. And I had to buy gas. (But I didn't trample anyone, and I kept it light singing along with some great tunes all the way there and back.)
11:53 AM, November 29, 2008

Carolyn (Diary of a Sewing Fanatic) said…
I stopped doing those early morning Black Fridays about 5 years ago...because of a similar type incident at the Wal-Marts by me. The police were called but luckily no one died...it just ain't worth it! And they have even more stuff on sale in two weeks!!!

heartinsanfrancisco said…
Sorry Gorgeous, but three workouts in one day is not human -- it's SUPERhuman.

Are you trying to make the rest of us look bad, or can't you help it?

I think there is something seriously wrong with a society that encourages the kind of incident that occurred at Walmart yesterday. Now THAT is not even remotely human.

Faith at Acts of Faith Blog said…
Oh Liz you look like you've got the perfect model pout down w/o all the collagen! And the hat says you are totally a hipster! Your son took a good photo. As I type this I have the scene from I Am Legend on pause when Will is all sweaty doing chin ups and looking mighty fine - so go get your workout on!
10:02 PM, November 29, 2008

sippinwineman said…
I swear, it's the green-as-hell-leaves on the trees that's crackin' me up. The hat's cool, but on the east coast, I see them often enough. Run Angel run
10:27 PM, November 29, 2008

Anonymous said…
I hear you!Black Friday lines are NOT for me. I'm sorry - but standing in the cold for 12+ hours, just to race someone Husain Bolt style to toy aisle just doesn't sound like fun.

Its a shame about Wal Mart and that worker. I went to the link you posted. Overcharging. **shakes my head**

Liz Dwyer said…
Daniel,
Thanks for saying so! The hat is the "I don't feel like doing my hair!" hat. My hair is too big to fit a baseball cap on it so this is the alternative!

Mes,
I was so out of the loop once I started hanging out with my dad that I didn't even hear about the Toys-R-Us till today. What in the world???

Anali,
I just can't imagine putting myself under all that stress to buy something. It's not worth it. And my dad and I had a great, great visit! So much fun, even though ND got KILLED!

Jen,
What kills me is folks who know about how Wal-Mart operates and are like, "I don't care! They have cheap prices!"

Thank goodness for online shoppnig so you don't have to venture out into the craziness.

April,
I read today that some Wal-Mart rep said some mess about the guy only being a temporary employee and that his tone was sort of dismissive. Yeah, they are totally accountable too.

NYC/CR,
First time I went to Wal-Mart was when I was working for a summer in Houston. I'd never heard of it before and everybody I was working with went there. It was freakish because of the sheer size of the place. I'd never been in a store so big. I was all over that campaign to keep Wal-Mart out of LA city limits. So glad that passed.

Jameil,
I slacked off yesterday and today since I was with my daddy so thank goodness I did those three workouts! I'm gonna need to do a hour run tomorrow morning!

1969,
It is TOTAL guilt. 100% guilt. Aren't those Jillian Michaels workouts the bizness? Love them! Good idea to drop all the desserts off at someone's house. I'm just chucking the rest of the pumpkin pie in the trash. I'm not too keen on leftovers anyway. And my face looking thinner??? Optical illusion. I'm telling you, I have not lost a SINGLE pound!

Sundry,
Oh no that you had to do that roundtrip! But at least the traffic was really light. It only took me 15 minutes to get from LAX to SHERMAN OAKS on Saturday morning! I saw gas for $1.91 today. Unbelievable. I might dance a jig instead of trampling somebody.

Carolyn,
Yes, in two weeks, there will be even more on sale. And two weeks after that, even MORE, so there really is no need for folks to act a fool! It's unnecessary.

Heart,
LOL, I just needed to not feel like a hot, bloated mess, especially since I was going to be running around with the Notre Dame Band. And yes, there is definitely something seriously wrong when stuff like that goes down. Materialism at it's finest.

Faith,
Haha! Yes, my little photo genius gets all high fashion photographer on me. "Turn your head to the right a little more, Mommy! Yeah, that's it!" He's funny! I used to REALLY get teased for my lips when I was younger and it made me feel self conscious about them, but after about age 20, I loved them!

Sippinwineman,
Lucky you that you've got these hats all over the place. Not out here though. This one used to be my husband's back in the day and I jacked it for myself a couple of years ago.

Beauty,
Ooh, Usain Bolt! Love him! But yes, not the way to go shopping. How can you even look stuff over to make sure it's what you want if you're racing through a store, acting all desperate and crazy. And, standing in the cold makes it doubly insane!

Miriam,
I wouldn't have thought so many people would comment about the hat either! Too funny. I don't even know why I posted that picture, except as a way to demonstrate how jacked up I was on the day after Thanksgiving. I mean, hiding under a hat AND sunglasses??? LOL!

And isn't that info on Wal-Mart something else? I seriously do not see how anyone can support them or their atrocious business practices. They're immoral.
9:47 PM, November 30, 2008

Anonymous said…
Why would anyone give up precious sleep to stand in long lines to guy stuff? I don't get it. That Wal-Mart incident is consumerism at it's worst.
12:03 PM, December 01, 2008

Anonymous said…
Kids. What can you do?

I didn't go shopping on Fiday either. Although I did buy a bottle of wine while I was in Canada because I like to bring wine home from places I visit.
5:21 PM, December 01, 2008

Liz Dwyer said…
Mocha Dad,
Yeah, I read a story about people who started standing outside a Best Buy on Thanksgiving morning at 8 AM! So they missed getting to spend Thanksgiving with their family so they could get a few bucks off a TV. What in the world?

Citizen,
Yes, these kids are something else! They are too grown up at such a young age.