Don't Mess With My Marathon Plans! 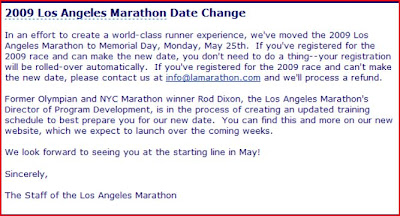 #^&@%*@^$%*@^!! OH REALLY?
When I first began training for the Los Angeles Marathon, the date of the race was the first Sunday in March. March 1, 2009 to be exact. The race has been the 1st Sunday in March for 20+ years, and in this city that can sometimes seem to lack permanency or history, it's nice to have some things that are rooted in tradition, albeit a rather short tradition. I was also naive enough to believe that the City of Los Angeles owned the marathon. I figured, if it has the city's name on it, they call the shots.

I have been schooled on both fronts. First, the marathon got sold from one corporate entity to another. Now the guy who owns the Dodger's owns the Marathon. We know how great THEY did this year, right? Then, political wheeling and dealing necessitated a date change to Monday, February 16th. That happens to be President's Day, a day not everyone has off work. And why did this happen? Partly because churches were concerned that a Sunday marathon disrupted worshipers ability to get to church.

Fast forward two months and, voila, the Marathon owners have decided to move the race date yet again! TO MEMORIAL DAY!

I think everyone at the Marathon holding company should be fired. Somebody even wealthier needs to buy the race back from these asinine, inept, dumb as rocks people. Spielberg, where are you when we need you? AAGH! I just want to say bad words right now and call them all lots of names. And throw eggs at them. And superglue their mouths shut. AND whack a hammer against their heads so that some sense can be knocked into them.

You can't take people who are training for a specific date and just tell them to keep on training for a race that's three months later. And do they want people to die from heat exhaustion? What happens if it's 90+ degrees on Memorial Day? Do they really think elite runners are gonna come to LA to run in hot as hell May? Are we really going to have street closings on a huge holiday weekend when everybody's trying to head out to the beach? What about the charities who are counting on money arriving three months earlier?

Oh, and where is our Mayor's voice in all this? Yes, I'm talking about Antonio "I have accomplished nothing while in office except cheating on my wife" Villaraigosa. Crickets are chirping because while all this is going on, he's cheesing on stage at Barack Obama's press conference.

Psst! Mr. Obama, Villaraigosa can't even figure out how to work with marathon owners to make a great running experience in his city. Whatever he tells you, don't listen! Do the exact opposite!

It's days like this that Los Angeles lives up to it's plastic soul reputation. That said, I'm still gonna run the race in May. I just don't think it's going to be my first marathon anymore. I don't know yet what race will be my first race but my heart is BROKEN over this STUPID, STUPID decision.
Email Post
Labels: antonio villaraigosa Barack Obama Los Angeles los angeles marathon Politics Running

Tafari said…
Liz - Sounds like you are a little upset. No really that is fucked up especially if you have a training schedule.

Ghetto Photo Girl said…
This pisses me off to the nth degree and I'm not even running it. But I live here and moving an event that huge to a weekend that popular is just a recipe for disaster.

Liz Dwyer said…
Tafari,
I am PISSED! A lot of folks are. It's just a stupid, stupid decision. They're making decisions in the interests of something else, not runners! They clearly didn't ask people actually running the race what they thought about the decision. :(

Ghetto Photo Girl,
Why is it that all of us regular folks "get it" that this is not a good idea, but the powers that be do not? UGH! They better have paramedics lined up every step of the way.
6:10 PM, November 10, 2008

This is really very small ‘townish’ of L.A. But all L.A. is really is a bunch of small towns laced together by freeways.

I have a feeling that when you decide on another marathon to be your first it's going to go great for you.

Memorial Day?! Are they crazy? Who wants to run in that heat.

Shiona said…
I am sorry to hear that politics and idiocy has sabotaged this marathon for you. Good luck in your training. Hopefully you can find something to run in...
12:27 AM, November 11, 2008

Malik Akbar said…
Hey Liz. Check the race calendar on Runner's World I'm sure there are other March races that are reasonably close to you. Distance running is all about overcoming adversity. Keep on pushin'.
9:17 AM, November 11, 2008

Liz Dwyer said…
Mes,
It's very small-townish. It feels like the guy who bought the race WANTS to lose money on it! Either that or he has a desire for LA to be known where people pass out in the street from heat exhaustion.

NYC/CR,
Nope, not well-thought out at all. It's so disappointing to see that the "leadership" of this city keeps the drama going with bad decisions like this.

Runbun,
I'm also going to keep training. If they have no one sign up, maybe they'll get the message and move back the date. I'll check out that Pacific Half in March. I'm definitely looking for more 1/2s to run.

Shiona,
I'm definitely going to find something. All this getting up every Saturday and then trekking out to run three times a week is not going to waste! Politics and idiocy sabotage so much other stuff in our lives, I don't know why I'm surprised about this!

Malik,
Aww, thanks. It is definitely about overcoming adversity, that's for sure. I just figured it'd be more in the line of, "Ow, my leg hurts."

I'm checking out the Surf City Marathon on February 1st. It's an earlier date but I think that might have to be the one. Thanks for the link to the Runner's World site. I'm over there alot, checking out what's what and keeping myself inspired!
9:37 AM, November 11, 2008

I'll tell you here in Denver, they canceled the marathon the DAY of the race.