Invitation Issued: Citigroup is the Princess of the Bailout Ball

I watched the American Music Awards tonight. There were a lot of performances but, unfortunately, only a few that knocked my socks off. However, my favorite performance was Annie Lennox. I've loved her for years because she can sing and she always keeps it classy.

Just as I was contemplating how un-"I'm a singer but I really wanna be a stripper" Annie's performance was, I clicked over to the MSNBC home page and saw this: 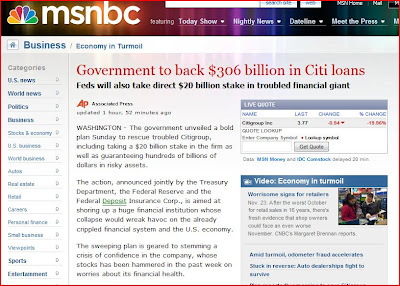 I'm having a hard time keeping track of all the corporations we, the American taxpayers, are bailing out. And now we're adding Citibank to the take AND it gets announced on a Sunday night? How shady! They can lay off 50,000 employees last week but now we all have to bail them out?

Folks were so angry last week that the car company CEO's, who were asking for a measly $25 billion in comparison, were flying private jets. Hmph, what they were asking for is chump change compared to this Citibank bailout. Why is it ok to help Citibandits and not Detroit? Is this some white collar/blue collar class warfare going on? Detroit has to come up with a plan but the white collar bankers don't? What's up with that?

I'm wondering, is every corporation gonna line up with their hand out and ask for a golden parachute? We are financing this stuff and no one bails out our student loan debt or is gonna send us to a spa to do business.

What's the bailout total now? Isn't it over $1 trillion dollars? By the way, who's bailing out the State of California? Our governor said we have to cut $4.8 billion from the state education budget. Clearly, Arnold Schwarzenegger needs to take his butt to D.C. and get some money while the getting is good.

As Annie Lennox sang tonight, "Why?"

Why are we bailing out these Citigroup clowns? When is this financial madness gonna stop?
Email Post
Labels: end of the world finances government Money

nyc/caribbean ragazza said…
I don't understand the hesitation regarding the auto industry vs. the banks.

Jen said…
Is it that they're only backing loans? Living in MI the lack of bailout for the auto industry is HUGE. I've already heard from three friends in the past week (since the help was rejected) who are pulling up stakes. This is on top of many, many in the past couple of years. And don't get me started on people I know who've had to walk from their houses.
4:45 AM, November 24, 2008

Mac Daddy Tribute Blog said…
After the Pink performance I turned it off. It wasn't enough to hold my attention.
5:44 AM, November 24, 2008

Liz Dwyer said…
J'taimee,
Seriously. College should be free in this country in the first place instead of them charging the astronomical tuition rates and fees that they do... which take folks 10,000 years to pay off.

Luis
Oh thanks for the link. I'll put it in my post. I read this morning that she just had spinal surgery 3 months ago and wasn't expected to be able to walk yet but she can. Wow. She IS cool!

NYC/CR,
You'd think the auto industry would be a no-brainer. Making them come up with a bailout plan is fine. I'd love it if every executive agreed to be paid no more than plant workers too. Why should bailout money go to pay million dollar salaries?

Jen,
Not just backing the loans but also giving them like $20 billion to do who knows what with. It must be so incredibly sad for you to be witnessing what's going on there with folks having to leave and/or losing everything. I don't think folks "get it".

MacDaddy,
I hear you. I was doing like ten other things while it was on. I had to mute half of Taylor Swift's performance. That girl can NOT sing!
7:32 AM, November 24, 2008

April said…
I don't think it's so much white collar/blue collar as it is, "where's the green?" No one gets loans or credit if the banks go out of business. And in banking, auto-making, and every other industry the one thing that's clear is that it's always the working stiffs who get screwed.
I'm not defending the Citibank bail-out, mind you - it makes me crazy as well. But I think that's the difference between the two.
8:49 AM, November 24, 2008

DJ Black Adam said…
It would be funny, but I just can't even begin to laugh. These corproations made BILLIONS of dollars over the last 20 years, due to the de-regulation of the neo con god Reagan, allowed them to get fat off of doing loans they KNEW were bad and topicing that off with bundling these loans they KNEW were unstable into marketable securities that the whole world bought under the advice of companies like Lehman Brothers and Merril Lynch.

Now the every people they are firing and foreclosing on have to RESCUE THEM?

Shiona said…
Yeah the whole manufacturing versus the banks thing is getting me as well. Ahh more socialism, how ironic. As I watch the stock market Citibank went up 58%. How nice for them...
1:19 PM, November 24, 2008

Anonymous said…
Annie Lennox - one of my all-time favourite singers. More talent in her little finger than most of the young nouvelles like Kate Nash etc.

As you say, how come big business thinks it's entitled to multi-billion bail-outs while the likes of you and me have to sink or swim with little or no help? I don't know about the US, but here in the UK the banks have gobbled up the government billions but are still squeezing businesses and mortgage payers and calling in loans and overdrafts left, right and centre. How do they get away with it?
1:23 PM, November 24, 2008

Faith at Acts of Faith Blog said…
I really hate Ah-nold and how he effed up the state budget even more. So now he's gonna cut education while he sends his kids to private schools of course.

I watched 24 last night. I'll look out for the AMA video clips.

The auto industry has strong union membership and the Rethugs and some other Dems want to bust them up.

Anonymous said…
Los Angelista,
I don’t watch much TV and especially not awards stuff. Something about those who control our visual media using it to congratulate themselves …

But what you said about ‘And I really wanted to be a Stripper’ hit a cord with me. I was thinking about the great days before MTV and the whole “music-video” thing became more important than the music itself. Back when what mattered was could you really, like SING. Or actually PLAY a musical instrument. Or maybe write your OWN music. Think of all the great singers/musicians/groups that would never make it now because they weren’t “pretty”, so wouldn’t have fit into this very narrow spectrum we have now. Wow, Bootsy Collins woulda made one uuugggly video; picture Aretha makin’ it now?

I was thinking about the male side of that: “I really wanted to be a Gangsta but I just act like one on my videos”

Anonymous said…
All this bailout stuff (no matter who it is) gives me a bad feeling that deep down it's only digging a bigger hole for the poorest of the poor.
5:32 PM, November 24, 2008

Liz Dwyer said…
Ian,
The stress gets to me a little bit too. It makes me want to watch crap reality TV. Probably why TV viewership is up so much now. It's not good.

April,
Good points. If the banks go down, everything does. But it seems so unfair, so wrong. And, doesn't everyone say that if Detroit goes, so does everyone else?

DJBA,
I agree with you about the greed and corruption. And now we have to bail them out because they were greedy and corrupt. It's not cool.

Shiona,
Their stock went up? Wowzer. And it is funny how the socialist cries go unheard these days.

Nick
I think it's same here in the States. There's a lot going on and some of these businesses are really trying to milk this as best as they can. It's a true shame. But Annie Lennox is amazing. Love her.

Faith,
I have never liked him as Governor. He is the most inept, unqualified... aagh! The budget stuff here is abysmal. I don't know how the schools can keep functioning. I really don't.

Daniel,
I was thinking about that exact thing when I was making my hot 1980's guys list last week. There are a lot of singers that only had one hit wonders, I'm sure, because people found out what they looked like. That's my issue with video games like guitar hero. Kids play them but how would they really know how to play since they don't have a real guitar or drum set.

1976,
I agree. Folks are really hurting. I saw stories about thousands of people showing up at holiday turkey giveaways out here in LA. And then for a foreclosure workshop, the people expected 200 and got 2000 people.
9:46 PM, November 24, 2008