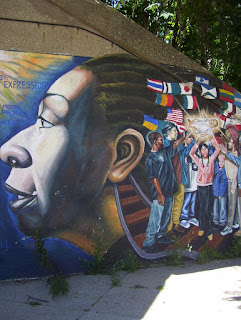 I woke up around 5 am and wondered if it was all a dream.

Thankfully, it was not, and so the tears that had been falling last night commenced once more. Indeed, I had to wear sunglasses all day today because my eyes were so swollen from crying so much.

But what a beautiful day it was. I was so happy that I found myself giving hugs and high-fiving strangers.

It began when I dropped my kids off at school and a parent I didn't even know said, "Congratulations on Barack," and smiled at me.

Before I knew it, I was tearing up and hugging her back, "No, congratulations to all of us!" And then I started talking a mile a minute about how excited I was. She didn't speak much more English so we just laughed and hugged again.

I celebrated so much that I splurged and went to Starbucks TWICE! (Yeah, in this economy, that is a splurge!) The second time, the black barista started tearing up as I ordered my tall skim chai latte with a shot of sugar free vanilla. "Order that latte, girl, with your elite self!" Before I knew it, we were hugging across the counter and cracking up about how we were gonna eat arugula breakfast, lunch and dinner!

I found myself walking taller than I have in weeks and driving down Hollywood Boulevard blasting Depeche Mode, and cheering with the brotha's who pulled up next to me and rolled down their window to ask, " How ya feeling today, sista?"

Really darned good, so how can I not yell out a car window, "WHOO!!!"

Oh my goodness, I'm yelling out car windows... and I wonder why my kids were yelling out the windows last night!

My mother made me cry today by telling me how she cried for two hours this morning, and how she was thinking of her mom and dad, her grandparents, and all the hardships they endured and the sacrifices they made. I sobbed again in the Trader Joe's parking lot recounting that conversation to my best friend.

My sister called me and we talked about how no longer can people say that we "mixed" kids are gonna grow up crazy and confused. No more of that, "You'll be ruining your children's lives," mess. Because yep, one of those mixed kids is about to be in the White House. How ya like me now!

I cried with two other moms during our son's kung fu practice. We were a hot mess in the back of the kung fu studio, watching our kids doing kicks and punches while we talked about how we know racism is not over, the worlds problems are not solved, but this is a moment of such magic.

And then the tears flowed hard and fast as I walked back to the car with my seven year-old son, the same boy who once told me he wanted to be a snake so he could shed his skin and turn white.

"I feel really good about being black today, mom."

How does a mother not cry when their black male child, born and raised in the United States of America says that? But I only replied, "You do? Why?"

He was so matter of fact, holding my hand as we approached our car. "I never thought there'd be a black president, mommy. I think it's SO cool!"

An hour later he was still talking about it. "Now, the White House isn't as easy as you think. Barack's gonna have to meet with all the generals and make big decisions for the United States."

He paused for a moment and said, "There's lots of decisions... but at least they get a cool dog."

Anonymous said…
I hadn't really thought about that, Liz, but you're right, anyone black or mixed race is going to feel so much more confident now there's going to be a black president. What higher validation could you have that whatever your skin colour happens to be that's just fine and it needn't hold you back in life? And hopefully even some of those engrained white racists will start loosening up a little.
1:04 AM, November 06, 2008

Anonymous said…
Unfortunately, things were much more subdued here in this red state. But I still walked with a spring in my step and a smile on my face. We're on our way - I believe that.
3:18 AM, November 06, 2008

Unknown said…
CRY ON! Hundreds of years are pent up in us ~ stuff we probably pushed way down deep in there!Stuff passed on to us from our ancestors. Love and pain. Been crying off and on since Tuesday night too ~ Big, good, fat, BarackObama tears...it feels good...
7:10 AM, November 06, 2008

Sundry said…
What a wonderful kid. I love, "The White House is not as easy as you think..." An empathetic young man.

I had a fever of 102 when they called the election for Obama and I've been home ever since, so I'm missing out on this and appreciate you writing it. I've been crying off and on, too.

It feels like we have said to each other that we are one country with not only hope, but with viable proof that we can grow so that we can accept the best that each of us has to offer.
7:56 AM, November 06, 2008

Black Wombmyn Chat said…
I'm so happy you had the chance to celebrate with others. In AZ, I think Obama had something like 45% of the vote (which was still phenomenal considering this is McCain's home turf) but I heard nothing but absolute silence the moment Obama's win was announced.

The next day, I only had the pleasure of running into two black people the entire day. We gleefully shared our pride, but alas, it is quite different when you are surrounded by silence as opposed to the raucous, collective celebration that you and so many other Obama supporters experienced.

I would love to have been able to dance in the streets and yell out of car windows with others--and hug strangers-- during this historic moment.

Carolyn (Diary of a Sewing Fanatic) said…
I'm just glad to know that I'm not the only who has been weeping/laughing/crying on and off since the announcement Tuesday evening! I'm in GOOD company!
10:03 AM, November 06, 2008

West said…
Very cool. I've shed no tears, but then, it ain't completely real to me, just yet.

Jen said…
I pray that all this good feeling is only the beginning.

I think President Elect Obama's speech really said it all.

I watched it again this afternoon when I was more awake than I was on Election night. The faces in the crowd were amazing.

Shiona said…
I too enjoy seeing the diversity. Not seeing much since I'm in a red town but it's great to watch. It just seems like a cloud has been lifted or something. People are just nicer.

Liz Dwyer said…
Nick,
Yes, because whenever folks would say, "You can be whatever you want," in your heart, I'm not sure it was ever really true. There was always a ceiling to it. I try not to think of the post-Civil War Reconstruction Era when there were black senators and then no other black senators for about a 100 years. I think we're in for some more permanent changes instead of the sort of racist backlash that happened after Reconstruction.

Citizen,
You keep smiling! Can I tell you though that I chuckled this morning when I read that Sean Hannity cried in the bathroom after Obama's win. But folks have got to see that uniting is the only chance we have out of the socio-economic hell-hole that we're currently in. I hope that the red/blue state labels quickly become a thing of the past.

Cyndee,
Didn't you get my email? No Jefferson theme songs allowed! That said, so sad that they were pinning their hopes on somebody who didn't even know Africa's a continent...

House,
I feel so elated still and it's SO nice to see how happy so much of the rest of the world is. What a great moment for America and for all of us!

Sundry,
Are you feeling better yet? What you said is so true. I saw a poll that now 67% of Americans believe we can have racial unity-- the highest it's ever been. Now we just have to do the work in our individual lives to make it happen!

DMB,
That has to be hard to have such a wonderful moment in history yet see such glum faces all around. I wonder too if some of that other 45% is afraid to be happy because of potential social repercussions. That's a hard spot to be in.

Carolyn,
No you aren't the only one! I'm definitely not finished crying either... and just wait for inauguration day!

West,
So sweet that your girl cried! Have you cried yet? You know you want to! :)

Jen,
I am praying too that this is a new start for us all. And seeing how so many are so engaged, I hope that folks start really looking at their personal lives, at their circle of friends, at how they engage with various communities -- we can all think about how we can behave to bring us closer together in pursuit of our common goals.

Shiona,
I might be able to take them off today! Then again, just when I think I'm finished crying, I start up again. It does feel like a cloud has been lifted and it's hard to believe that that spirit won't impact everybody!

Faith at Acts of Faith Blog said…
I'm sure you already do but please tell your sons they can be President, a CEO tycoon or whatever. I now people have been inspired because a homeless Black guy walked into Starbucks and told me we were getting married.
8:30 PM, November 07, 2008

Druzelle Cederquist said…
Hi Liz,
I linked this post to my after-election post on Luminous Realities today - you and Will Smith and Barack Obama's speech on race, among other things. It is very moving how quickly people shared personal stories around race in places you'd least expect. I'm watching Obama and wife visiting the White House as I write. Wonderful.
-- Dru
1:35 PM, November 10, 2008