Sigh. Depeche Mode has switched their website design. I am not a fan of the new look.

I hate those orange bars like nothing else. Every time I see it I feel like I'm stuck in the Halloween version of the Karate Kid. They look like giant orange popsicles... or prison bars. I feel like one of the guys should go over and poke his head out between the top two bars and say, "Rescue me, Los Angelista, from this ugly ass design!" And then I rescue them and they give me concert tickets to all their LA area shows because they're so grateful. (Ooh, I like that idea!) 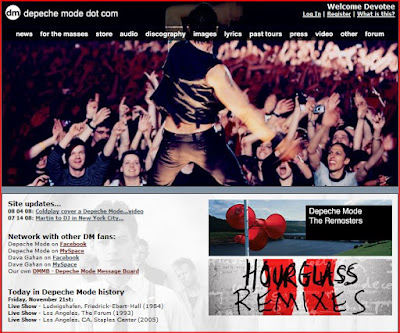 On the new site I don't see any "Today in Depeche Mode History" -- which is really a shame, because if not for the old site, I might have forgotten that three years ago tonight I was at Staples Center, listening to my favorite band rock the house. Plus, see all those cool links up at the top: video, discography, lyrics, press, images, past tours... that's where Depeche nerds like myself spend our time. Do you see that stuff on the new site? Anywhere??? I sure don't. And it's really annoying.

That said, I might be able to forgive the band a little bit for hiring these people that invented the orange bars and otherwise craptastic web set up if the record they put out sounds as good as what's on this clip of them jamming in the studio:

I think I'm going to really, REALLY like this record.
That is a HOT beat they've got going there. The only question left is, can the website also reclaim it's former hotness?
Email Post
Labels: andrew fletcher dave gahan Depeche Mode i love youtube martin gore web design websites

Liz Dwyer said…
Steve,
I HIGHLY doubt it would look like this if Daniel was doing it. I wish he was doing it. He said on the board that there's a team of outside developers and some other designer. He's not the one behind the wheel anymore.
3:11 PM, November 21, 2008

Steve: The Lightning Man said…
The new stuff sounds promising. The web clips were actually less interesting than the song snippets that were floating around that someone recorded from the Berlin press conference. Now THOSE two songs sounded reallllly good.

I was unaware that Dan wasn't really involved. I haven't been paying much attention to BONG as of late, and I don't bother with the dm.com forums. As the band's webmaster, I'm a tad taken aback that he'd be nudged aside for some team of developers to make it look all artsyfartsy. They should have just let Corbijn and Barassi do it.
10:25 AM, November 22, 2008

Miriam said…
The old one is definitely better. More exciting.

Liz Dwyer said…
Steve,
I really liked those snippets from Berlin a lot. I couldn't get them out of my head for days. Yeah, it's weird that this team of "developers" is coming in. I hope they aren't going to turn it into something that long-time fans are gonna hate. But, I have a feeling that's gonna be the case.

Miriam,
Yes, it's too minimalistic and also lacks the content it should have. Register to vote... you mean for the Divine Caroline Award for me?
9:38 PM, November 23, 2008