Forget Twilight! Give Me Bolt! 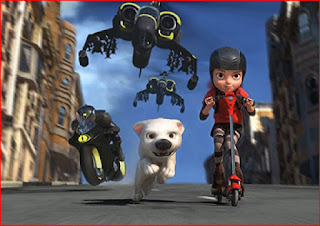 I know everybody and their mama is going nuts for that Twilight movie these days but I'm not. I'm firmly in the Bolt fan club instead!

Yes, I am the woman who's read Dracula over 200 times. It should be a no-brainer that I'm all over Twilight instead of the tale of an animated, action-hero dog. The thing is, I didn't read those Twilight books and I tend to find the lead Twilight guy, Robert Pattinson, totally unattractive. I know the tween ladies are swooning over him, but to me, he just looks rather constipated and like he needs to go sit outside and get a little sun. I mean, did the studio require him to maintain the ghostly-white pallor for the press junkets?

Here's the thing: I already used up my non-kids movie allowance watching Quantum of Solace. I can't take my kids to Twilight, although I'm sure some dim-bulb parent did go with their child and sat around saying, "Look honey, vampires! Can you say 'vampires'?"

Plus, I'd rather laugh over the adventures of Bolt, a dog who doesn't know he's the star of an action TV show because he thinks his life is real. Bolt doesn't know he doesn't really have super powers, and he doesn't know he's really not saving his owner, Penny, day after day. In that sense, the plot line sort of reminded me of Toy Story or, for adults, Jim Carrey's The Truman Show. Everything around Bolt is manipulated to keep him thinking that what he's experiencing is all real. 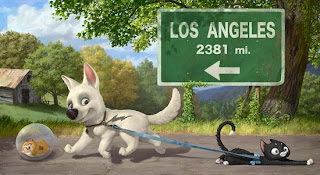 that what he's been living is a lie. With the help of his new friends, a cat named Mittens and an insanely funny hamster named Rhino, Bolt has to figure out how to create a meaningful and happy life, all while trekking from the concrete jungle of New York to the Hollywood insanity of Los Angeles.

So you see, while you need therapy to figure things out, dogs just need some hang time with a cat and a hamster.

Speaking of cats, I'll admit that since seeing the film, my boys have assigned me the role of Mittens the cat. My seven year-old son is Bolt, and the five year-old has become Rhino the hamster. I can tell they enjoyed the movie a lot because I've been egged into participating in a couple of spontaneous re-enactments of Bolt scenes.

Seriously, can you imagine doing Twilight re-enactments with your kids? Yeah, I can't either. That bite me/don't bite me back and forth would just be, um, weird and gross.

Thankfully, Bolt has some good, witty dialogue in the film, it's funny, heartwarming, and the characters are well written. After yawning through a couple of recent kids' movies, it was nice to go see something age appropriate with my boys that didn't make me feel like I wasted my money and put me to sleep.

An added bonus for us is that since we live in L.A., we saw the movie at the El Capitan Theatre in Hollywood. That means that there was also a live, pre-movie show, complete with Mickey, Minnie and tons of other Disney characters dancing and singing holiday songs. I did wonder a if there wasn't a more diverse crop of dancers available to perform because I'd like to see more folks on stage who reflect what a super diverse Los Angeles audience looks like. But, it was still great, my kids cheered like crazy and the end of the live show even had snow.
My boys liked the snow ALOT. Me? I remembered why I ditched the Midwest for sunny Southern California.

If you're looking for something to do with the kids on Thanksgiving, take them to see Bolt. If you're here in L.A., go ahead and make the trip to Hollywood. El Capitan is open on Thanksgiving (and Christmas) so you can go have a great time laughing at an early matinee before you eat too much pumpkin pie. I'll admit I'm thinking about doing exactly that. I sort of want to take my boys to see it again because they enjoyed it so much, and I did too.

Toni Campbell said…
As a bookseller, I hardly ever read anything this popular. I tend to believe that books that the masses love must not be good (I am a book snob). I didn't start reading Harry Potter until the 3rd one came out!
I read an essay by the author Alisa Valdez Rodrigues where she points out all of the Mormon propaganda in the Twilight series and that put the last nail in the coffin (pun intended)on any chance of me reading it or seeing the movie.
Instead I started reading a vampire series by L.A. Banks that I really enjoy.
I will definitely see Bolt!
8:55 AM, November 25, 2008

April said…
The girls and I saw Bolt over the weekend, and they totally loved it. I laughed out loud quite a few times myself. Neither of them have shown any interest in Twilight.
9:09 AM, November 25, 2008

Miz JJ said…
I picked up Twilight in an aiport somewhere. I find it good mindless entertainment. I don't necessarily think it's great literature, but it's a light, fun read. I haven't seen the movie though.
9:23 AM, November 25, 2008

He and his seventeen-year-old female friend LOVED Bolt. They thought they'd "like" Bolt, but they actually loved it.

He loves some vampire stuff. He HATED Twilight. He feels, basically, (and I agree) that anyone who truly loves vampire lore can't possibly like Twilight because it's a drippy romance and they pervert all vampire mythology.

Anonymous said…
Los Angelista,
I thought you meant you were a fan of Usain “Bolt”! That would be good of you also.
I remember taking my kids (when little) to the matinee of Toy Story, laughing at all the parts they didn’t and them looking at me, lol. Wasn’t that the first time that animated “Out-takes” were done? I remember sitting there and it taking a few moments until it dawned on me the incredible wit of that concept. The kids were young enough I had to explain it in the car driving home.
As far as theaters in LA, the kids and I went and saw the midnight opening of “I Am Legend” at “The Bridge” theater in the Howard Hughes Center last December. That was a nice place.
Thanks for the good memories.
“Boom like a 305”
11:59 AM, November 25, 2008

Liz Dwyer said…
Toni,
I'm that way as well. I don't know why I'm such a book snob! Very interesting about the Mormon propaganda. I think remember you mentioning that L.A. Banks series before. I have to check it out.

April,
Isn't it a great movie? That's why I'm considering going again. The Twilight commercials just look super cheesy and silly. I know it made loads of $$ this weekend, but it still seems mediocre.

Miz JJ,
How are you?? It's been a minute since you said hi! So maybe if I read the book I might be interested in it? Hmm... we'll see if it's at the library once all the hype dies down.

Jen,
Love that the teens loved Bolt too! It's got that appeal that folks of all ages will love. Hated Twilight! If they mess with vampire mythology, it gets a big "pass" in my book. Movies/stories that do that get on my nerves.

Daniel,
Hahaha! Usain Bolt was on my Olympic hotties list this past summer. He's good looking! I've never been to that Howard Hughes theater before. It's far for me. I don't know if "Bolt" the movie had outtakes because my sons both made a beeline for the bathroom. The minute the credits started rolling, they were out of their seats! And "Boom like a 305"! Love it! :)
1:04 PM, November 25, 2008

Anonymous said…
We've moved past the age where my kids will consent to watch this kind of movie. I king of miss them. I virtually nver see movies out except with the kids - the Harry Potter series, and so on. So, too, tonight - we're all headed off to see "W."
1:11 PM, November 25, 2008

1969 said…
I am taking the boys to see Bolt on Sunday. You need to sart watching True Blood on HBO. HOT!

Now that I have that out of the way, I don't have HBO! People keep saying True Blood is really good though. I wish HBO was free! Ok, I'm gonna track down these LA Banks books. Clearly, I need to read them!

Faith at Acts of Faith Blog said…
I agree on the Alisa write up and all of LA Banks' Vampire Huntress Series - the last one comes out in 2.5 months. I'm gonna cry. That would make such an awesome movie.
1:31 AM, November 26, 2008

Carolyn (Diary of a Sewing Fanatic) said…
Well I don't have small children anymore so I will probably see Bolt when it comes on cable...as for Twilight - NO to the books and to the movie. I keep thinking WTF? But I really thought it was just me! *LOL*
7:48 AM, November 26, 2008

Liz Dwyer said…
Faith,
I hope some studio somewhere has the film rights snapped up. Then again, if it has black characters and they aren't hood rats, I won't hold my breath.

Carolyn,
This is when rent-a-toddler would come in handy, right? :) LOL! Anyway, it's a good movie, even for an adult. There were some things that went over the kid's heads and I was dying with laughter. You'll like it!

I wonder if Twilight will be #1 again this weekend.


Shiona
Going to the movies with a baby is HARD! You know folks bring their kids to everything though. I remember watching Lord of the Rings and hearing babies crying. That's when you realize that no, everybody does NOT need to have kids!

The thing about True Blood that made me dislike it (even though I've never seen an episode) is the advertisements with the tongue and the blood dripping off it. It was just too porn-ish for me. Not feeling it!
12:27 PM, November 27, 2008