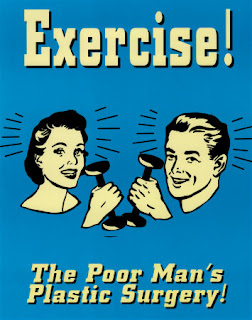 Whether you're ready for it or not, the Holiday Season officially begins this Thursday on Thanksgiving! Of course, there's one small detail to consider: Between Thanksgiving and New Year's Day, the average weight gain for us pleasingly plump Americans is a whopping seven pounds.

I don't know about you, but if I gain seven pounds, I'd have no clothes to wear. It just can't happen. In fact, everyone I know, including yours truly is either trying to lose weight or trying to avoid gaining any weight between now and the first week of January.

Being the good samaritan I am, I figured I'd pass along a few ways you can burn off some extra poundage in preparation for Thanksgiving Day. I figure, if you burn it off before giving yourself your yearly fix of Tryptophan, maybe you won't feel so guilty and bloated when you wake up on Friday.

I have a head start on this because I burned away 1928 extra calories this morning. Before I reveal how I did it, let's explore some options so you don't feel boxed in by my choices. There's a cool chart on Bodybuilding.com of how many calories an activity burns. Let me pull a few choices I think y'all might be interested in.

1) Swimming: I don't know how to swim so this is not an option for me. However, I know many of you think you have gills and that you're Michael Phelps. Unfortunately, it'll take you 6.4 hours to burn 1928 calories. On the one hand, if you're swimming all day on Thanksgiving, you're not eating. On the other hand, you might want to eat everything on the dining room table because swimming is known for giving folks a serious case of the munchies.

2)Babysitting: Times are hard and your friends are too broke to pay for a babysitter. That means they're gonna beg you to watch their kids. No worries! See it as a calorie-burning opportunity. And, to burn 1928 calories, you only have to play with those kids for 10.71 hours. That's not so bad and that gives your friends plenty of time for a dinner and a movie.

3) Praise Dancing At Church: Tomorrow is Sunday, so you could make this one fit right in with your schedule. Depending on what church you decide to go to, 5.35 hours of praise dancing might not be so far fetched AND, added bonus, you'd burn 1928 calories! Just make sure to avoid the after-service supper in the church basement, mmkay? Otherwise, the greens and chicken will make all your praise dancing be for naught.

4) Sex: Admit it. You were wondering, weren't you? So I'll spill the beans. The nice thing about sex is that you get choices. You can choose between active/vigorous effort or passive/light effort. If you're into "passive" sex, that'll be 32.6 hours for you. Yessiree, it'll take you almost THIRTY THREE HOURS to burn 1928 calories! I don't even think the King of Tantricism, Sting, could survive. Therefore, I suggest you go down the active road because that's only 16.3 hours. You may have a heart attack or lose some body parts, but hey, it's all for a good cause, right? At least your pants will be looser!

You don't like those choices? Okay, I'll let you in on my secret. All you have to do is go run 18 miles like I did this morning and 1928 calories are torched, just like that. It took me three hours and forty-nine minutes (hush up if you think that's slow), and that includes bathroom breaks, eight water station visits and totally feeling like I was going to die between mile 17.1 and mile 18. Surely that's better than 33 hours of passive sex. Right?

Clearly, running is the way to go. It's much more time efficient than any of those other choices and you might even be able to accomplish it more quickly than me. In fact, I'm sure you can.

How do I know I burned 1928 calories? Well, because of my new Garmin Forerunner 305 watch! One of you amazing Los Angelista readers (I'll let him "out" himself if he wants to) donated the watch to my running cause and so now, voila, I now know how fast I'm going outside, how far I've gone... and how many calories I've burned! I'm so in love with this watch!

Anyway, now that I've shared the secret to Holiday Season fitness with you, I'm going to go back to wonderfully slothful activities such as dozing on the sofa, reading, writing and watching TV. I certainly think I've earned them.
Email Post
Labels: exercising Fitness holidays nice people Running staying in shape Thanksgiving Weight

I LOVE this topic. Recently I bought a wonderful pedometer on Amazon.com. It's by Omron and it not only keeps track of how many miles I walk but counts the calories I'm burning too! It even keeps track of how much I walk in a week, I love that thing.

Also I was trying to lose a little weight. Not much, just about 7 pounds. Well I lost the 7 about 10 pounds ago! I'm hooked on walking, burning calories and losing weight.

Anonymous said…
I didn't realise there was a gadget that measured your calorie-consumption - very neat. And as MDC says, doesn't that encourage you to use up even more? To get to that nice round 2000?

As you know, my weight stays at a healthy level without much effort so I haven't been running since I was at school! But 18 miles is pretty impressive - going up steadily....
12:33 AM, November 23, 2008

Lisa Johnson said…
I'm getting ready to get on the treadmill in a little bit. Unfortunately I won't be burning 1928 calories, but every bit helps. I'm walking to the train again and I'm also returning to my yoga class tomorrow! Finally!
11:40 AM, November 23, 2008

Shiona said…
Wow I never thought I'd see praise dancing burning calories. But now I can see how that happens. After Thanklsgiving I don't see how I'll be able to move.
3:25 PM, November 23, 2008

You're my hero(ine) though. Seriously.

Liz Dwyer said…
Mes,
Good for you for getting so healthy! Six miles is a great walk, especially when you can see so much interesting stuff. I haven't weighed 120 lbs since I was 15 -- not sure if that would even be possible for me without starving myself, and I'm 5'7" so I can imagine that would be REALLY slim for you. I'm sure you'll figure out or your body will figure out what's the best weight for you.

Nick,
It is VERY cool to have gadgets that do all these things. I'm SO happy to have it. I can't wait to wear it on my next run. And lucky you that you don't have to work too hard to keep off the pounds. I do. I have to exercise like a madwoman. :(

Anali,
Yes, every little bit helps, even if it doesn't burn 1928 calories! I need to do more yoga than I do. I think it would help me relax.

Shiona,
That list had some stuff on there that was pure comedy. Like wood-chopping! I'm sure someone somewhere is still doing that but it's just a little impractical.

I usually avoid eating too much on Thanksgiving because I don't eat turkey and only really enjoy the cranberry sauce, stuffing and the pumpkin pie! I could do without everything else!

April,
Work it out! Wouldn't it be amazing if every business had an on-site gym or fitness club? Folks sure do need it.

Anonymous said…
the eye opening part is that burning 1928 calories - although admirable and quite hard to achieve no matter what the route - is not yet a pound of fat.