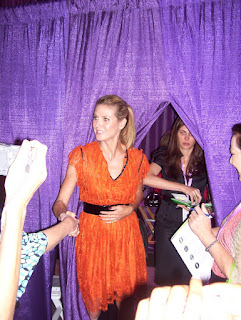 I'm having a great time at the Women's Conference. There are amazing people every where I turn! I just finished live blogging Condoleeza Rice's talk and she said she's still single because, "I never met anybody I wanted to marry and live with. That's why I'm single!"

Oh, ok. I guess. Nobody? Never ever ever? Not even anybody you wanted to get with and they weren't interested in? Nobody? Not even Rick Springfield or Michael Jackson when you were little? Hmph!

Anyway, I think I may need to soak my fingers in ice water after this because they're tired from all the typing. If you go over the Los Angeles Moms Blog you can see all of the live blogging I've been doing all day along with my two partners. Highlights of the day have been Chris Matthews referring to his wife as a computer and calling himself an insect. Then Christiane Amanpour sort of dissed bloggers... and Maria Shriver made everybody seriously cry when she told us how she got into bed with her sick mother for the first time this year, at the age of 52.

Anyway, on the super shallow, "I love her shoes and dress!" side of things, I was thisclose to Heidi Klum but her people dragged her away before I could snap a picture of her. We got video of her though and she's totally fly.


I've also been sort of stalking Dr. Oz throughout this entire event. I have such a huge crush on Dr. Oz but more on that later! It's time to hear Marian Wright Edelman and Gloria Steinem!

Update: Did a post on the session with Marion Wright Edelman and Gloria Steinem, moderated by NPR's most fabulous, Farai Chideya. I got a picture with Farai afterwards. 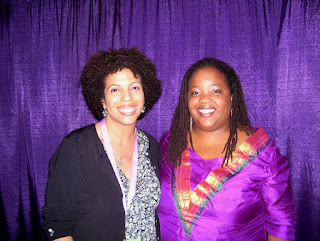 Gosh, I'm such a fangirl... I'm all, "Farai, can I be you when I grow up???"
Email Post
Labels: California Women's Conference Farai Chideya Gloria Steinem Marian Wright Edelman Minerva

Liz Dwyer said…
She's very classy! I was totally impressed by how gracious she was when I asked to snap a picture with her. What an inspiration!
3:24 PM, October 23, 2008

Shiona said…
Wow! That is so exciting to hear about so many empowering people. It's great to hear about their backgrounds. That would help me overcome my fears and go out and accomplish something!
5:02 PM, October 23, 2008