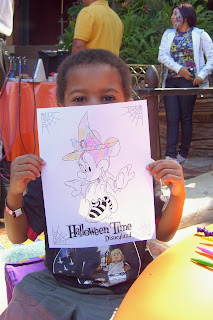 Sorry for my absence from Blog World yesterday, but I figured I should refrain from posting while in the throes of a serious NyQuil-induced haze. I only take that stuff if I'm absolutely desperate because it renders me semi-comatose. Who knows what insanity I might have typed in this space if I'd actually been able to keep my eyes open longer than five minutes.

I'm not exactly sure how I got sick so quickly. I mean, I was totally fine on Saturday and had a wonderful time at Disneyland. Speaking of which, I have to give a special thanks again to the Disneyland folks as well as MomSelect for the complimentary admission tickets. The park was gorgeously decked out with Halloween and autumn-themed decorations. It was all so seasonally festive that I felt like I was back home in the Midwest watching the leaves on the big maple tree in my parent's front yard change color.

Along with riding all the rides, I got to meet some other fabulous mom bloggers at a private reception Disneyland hosted for us. The boys got their faces painted, colored pictures, decorated bat cookies, scarfed down mini pumpkin pies and took lots of pictures with Jasmine, Aladdin and the Genie.

She started laughing and replied, "I'll bet your mom hopes you still say that in another ten years!" Isn't that the truth!

I'm always paying attention to diversity, so it was nice to see an increase in the diversity of the Disneyland performers. No, Cinderella isn't a chocolate-skinned sistah wearing a blond weave. I don't think that's gonna happen anytime soon. (Do I even really want that to happen? Do you think it should?) What I mean is that there were blacks, Latinos and Asians performing. More than one of each, so it wasn't a token thing, and they weren't all part of the Lion King float either, thank goodness.

We didn't stay till the park closed because by 11:00 I was tired. I had to drag my kids out of there while they moaned 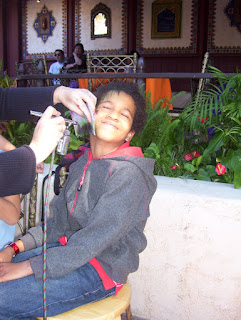 about wanting to ride Space Mountain again. My youngest, in rare form, cried, "But I want to live here forever!" I unsympathetically told him that I feel the same way about Santa Barbara.

We hit a little I'm-gonna-party-in-Hollywood traffic on the way home but I was in bed by 1:30 in the morning. Not too bad. I didn't sleep in though and I was outside on Sunday afternoon running 12 miles.

Why running 12 miles? Well, I missed my Saturday marathon training run since we were at Disneyland, so I needed to get it in. Ugh, it was definitely a little boring running around the track at the park by myself for two hours.

A little while after that, I began sneezing and my eyes started watering like crazy. I just figured it was allergies because I'd been running outside and, um, we have some insane fires burning. Unfortunately, a couple hours later, even my kids were like, "Mom, you look terrible!" So I dragged myself to Rite Aid, sneezed all over everything in the store and bought both NyQuil and DayQuil. I came home, ate two cloves of garlic, drank some ginger tea and popped the NyQuil pills. I've been doing that for the past 24 hours and I feel a LOT better. Trust me, it's a winning combination!

Anyway, I hope you stay healthy and, wherever you are, say a prayer for us out here in Southern California. We need these fires to go away!
Email Post
Labels: bloggers blogging Disneyland diversity Garlic kids los angeles marathon moms Running sick

Jen said…
Feel better - there are rotten colds all over these days. OTOH, you might have written something way fun in a Nyquil-induced haze.

Jen said…
Oh, and absolutely (although apparently not consistently) thinking of the fires around LA and hoping that they subside SOON. You all are definitely in my thoughts and prayers.
7:04 AM, October 14, 2008

Liz Dwyer said…
1969,
I am feeling MUCH better, thank goodness. I have no time to be sick, that's for sure. Disneyland was massively fun... but surely not as good as chance to see Maxwell AND Obama all in one weekend! :)

Jen,
Everybody I know has had this cold and I was feeling so sanctimonious because I hadn't gotten it. Hmph!

Oh my goodness, I was making no sense at all yesterday. And I had to go to a meeting. It was probably the quietest I've ever been in a meeting because I could not hold a train of thought longer than 30 seconds.

I hope these fires die down. It's really low humidity and very windy though. :(

Ian,
Later on today I should write about my first experience taking NyQuil. I turned into an incoherent mess and then passed out. I wouldn't make a good druggie either.
1:06 PM, October 14, 2008

Anonymous said…
I was reading that the air in LA is pretty polluted right now from all those fires so maybe that has something to do with it. Good to hear about the diversity at Disneyland, the pictures I've seen in the past have invariably shown an implausible array of well-scrubbed whites. But I hear Mickey Mouse is definitely voting for Obama....
1:27 PM, October 14, 2008

nyc/caribbean ragazza said…
I hope the fires calm down soon and that you feel better.

Shiona said…
I too am glad to hear about Disney being diverse. Those fires are pretty crazy! I hope they go away. I will be buying those hepa facemasks though. This is happening way too often.
1:07 PM, October 15, 2008