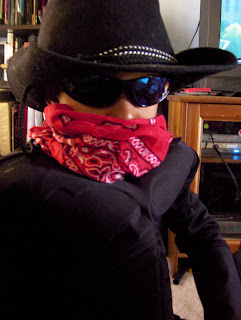 Today my youngest son is five years old. As much as I still see T as my little baby, clearly he's not a baby anymore. I can't even call him a baby without him getting all indignant over it.

The first thing he said when he woke up this morning was, "Is my pinata ready?" After that, "Do you want to take my picture now?"

My older son, O is a little more reserved, a bit more introverted . He's a really old soul who says things like, "I wasn't really interested in toys when I was five. I was more interested in learning." And it's true. I just got his standardized test scores back and boy genius scored in the 99th percentile in a bunch of areas.

This one though? Let's just say that T balances out my oldest son's personality by being the child yelling, "Who's ready to paarr-taay!" out the window to strangers walking by.

I laugh when my sister calls him Two Cents, Too Short and Too Crazy. He is a little crazy sometimes but every time T starts acting really off the hook I totally understand how he feels. You see, many of his wildest antics remind me of the stories my family has told over the years of stuff I used to do when I was little. When he's dancing on the coffee table, I remember that there's a story of me getting up on the kitchen table and dancing too.

Last Saturday afternoon I was trying to watch the fourth quarter of Notre Dame whupping Stanford and this boy sidles up to me dressed up in the outfit you see in the picture above: Batman suit, the black cowboy hat, the red bandana and the shades. He says, "I wanna hear that wiki-wiki song."

I tried to ignore him but he was so earnest that I got up, muted the game and put Newcleus' "Jam On It" on. I laughed like crazy over my son, in that get-up, dancing and rapping along with this:

He really loves hip hop, to the point that he has an alter-ego he calls "Hip Hop Boy" and he goes around busting out rhymes like last night's grocery store verses, "Have you ever seen a snake/eat a birthday cake/or jump in a lake?"

Although he's Hip Hop Boy, he's also an equal-opportunity rocker. The next request after he finished poppin' and lockin' to "Jam On It" was AFI's Miss Murder. Yes, a complete and total musical 180. But T went and got his guitar out of his room for this one:

Before we knew it, he was doing a rocker scream up on the table. We joke aro 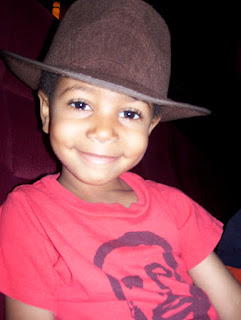 und here that he's so musically inclined that he's going to be this generation's Prince. He "plays" a keyboard, guitar, a recorder, a little electronic drum machine and also regular drumsticks that someone gave him so he now tries to drum all over everything.

Because it's his birthday and he loves chocolate, I was a "bad" mommy and let him eat a chocolate bar at breakfast. I'm sure his fabulous teacher is wondering why he came to school all amped up! This afternoon I'm taking cupcakes to his classroom. He went with me to the store last night to pick them out, and that's where the sweetheart in him really shines. He wanted to choose, "Extra nice ones so kids in my class know how much I love them. And my teacher too!"

So, cheers to my little T who loves his hats and his chocolate. Hugs and kisses to my little boy who can't read this yet but who proudly wears Star Wars t-shirts with a clip-on tie and so enjoys his rock and hip-hop. He brings such joy to my life and I'm so blessed that he was born today.
Email Post
Labels: Birthday hip hop kids Music parenting

Anonymous said…
Happy birthday, little T. Obviously a real live wire. And what impeccable taste, liking cupcakes. Though maybe your cupcakes are different from ours? When I was a kid, I loved the ones with a thick layer of chocolate on top.
1:44 PM, October 08, 2008

1969 said…
HAPPY BIRTHDAY TO T! He is absolutely adorable and has the most beautiful eyes....just like his mommy!

I always think it's the mark of a great parent when there are two very different kiddos in the house.

Anonymous said…
What a cutie! You can see the love all over that boys face! You do such a great job, Liz. Impressive.

Please print this post, put it in an envolope and give it to T when he's 16. I think he'll love to know at 16 how much his mom loves him. :)

Jennifer said…
Happy Birthday T! He looks so happy and loved -- kudos to you, Liz!

Before I had my daughter, I had no idea how much love I was capable of -- kids truly are an amazing gift. It sounds like both of your boys are fabulous, and very lucky to have a mom like you!
8:08 PM, October 08, 2008

nyc/caribbean ragazza said…
Happy Birthday baby T! he is too cute for words.

I love how he wanted to make sure his teacher and classmates knew he cared about them.

Invisible Woman said…
He is the soul mate to my 4 year old...definitely the hottest, cutest, most exasperating beautiful mess! lol
12:59 AM, October 09, 2008

Shiona said…
Happy Birthday T! That's great that your boys are so different. That cowboy outfit is too cute! He's so handsome!

Liz Dwyer said…
Everybody,
Thank you SO much for your very sweet thoughts. You'll be pleased to know the birthday boy was partying till 11:30 last night. He is very happy!

Pisces,
I have a soft spot for artsy folks because that was me as well. And he does charm everybody for sure.

Nick,
"Live wire" is SUCH an apt description! I don't know if the cupcakes are different but he shares your desire for a thick layer of chocolate frosting on top!

1969,
Yes, what is up with wild second kids? Is it because we don't hover as much? I know with T I was much more, "Oh you ate food off the floor. Okay..." LOL! I did not eat the cupcakes because those little kinder kids tore them up! But I did have the cake. Yum.

Jen,
That is very, very kind of you to say. They definitely both very different but they get along so well. Whew. Thank goodness for that.

Ian,
I am so proud of him. Absolutely so!

Claudia,
Yeah! A hug for the birthday mom! :) Thank you for saying a do a great job. Does it still apply now that you know he stayed up till 11:30?

Mes,
LOL, with my first son, it was the labor from hell. And with T it was so much easier...and look who's the bigger handful! :) Such a great idea to print this out for him. When he's 16... goodness, that'll be here before I know it!

Jesalyn,
Thank you! He did have a great birthday. He was so incredibly happy.

Jennifer,
What I always think about is that for a long time I, sadly enough, didn't really want kids and now that I have them in my life, I can't believe I ever thought such a thing. I am the lucky one. Without a doubt.

NYC/CR,
Fantastic parents? :) Maybe sometimes! Yesterday when I brought the cupcakes he was so sweet when he was trying to help me pass them out. He knew which type each of the kids would enjoy. It made me so happy to see him pay attention to other people like that. We all could stand to do so more often.

Invisible Woman,
That's a great description! I bet he'd totally get along with your four year-old!

David,
We really had fun at his party last night. Not a big extravaganza. Just us family. There was a moment when I was decorating the house for it that I wondered how different he'd be if I didn't do stuff like this for him. It really made him feel special and happy. That's so important.

Sundry,
Thanks! He always has the sweetest little smile in his photos. It makes him uniquely him. I can't wait to take a train cross country to visit him someday! :)

Shiona,
I enjoyed yesterday so much. I just could not do a huge birthday part this year. Too much going on and I was stressing over it. But whatever, he loved just having the cupcakes at school and then a little party here at the house. It might have helped that the house is covered in green streamers -- his favorite color! ;)
9:58 AM, October 09, 2008

Liz Dwyer said…
Jameil,
I sure am wondering where my baby is! I can still carry him around for a while but goodness, not for long. I hope he doesn't lose all his "where's the party" tendencies as he grows up. It makes him so special.
11:53 PM, October 09, 2008

Unknown said…
Hey, I missed the party! Hope it was grand!

Good job on the T man!

Faith at Acts of Faith Blog said…
Liz your kids are too cute. I guess I'd better get cracking if I want a bio child. I think being the eldest of six and expected to help in their rearing really slowed that maternal instinct in me.
10:12 PM, October 10, 2008