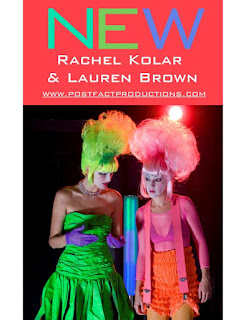 Have you ever wondered what inane socialite types (think Paris Hilton and Kim Kardashian) would do in a post-apocalyptic world? If so, you may want to go check out one of the encore performances of Post Fact Productions play, "New".

Actually, wondering what socialites think isn't really required for this play. You could go because you're contemplating the green wig instead of the pink. Mesh shirts over bikini tops instead of green strapless gowns. Or because you've been mulling over our perpetual state of war and the pros and cons of putting materialism ahead of love.

Indeed, the play describes itself thusly:

"In a post-apocalyptic setting, two young and flamboyant socialites, Rachel Kolar & Lauren Brown, are depressed by the bleak state of the aftermath of war. No longer is there room for extravagance, no longer are there parties or delusions of grandeur. In attempts to glorify the need for excessive materialism they devise a movement of neon colors, empty consumerism, absurd rules of engagement and foppish costumes. When their movement takes a turn too dark for the pretty pair of dipsomaniacal flamingos, chaos ensues."

So does it work? Should you go? I don't know. It may or may not be for you. They bill themselves as a "community for the Avant Hard". I'm not sure if I'm avant hard and every time I watch Project Runway and they do the "design an avant garde look" show, I always think I would design something totally pageanty/Halloween looking and get booted off. But, I'm a reformed raver so seeing two ladies dressed up in neon pink and green doesn't faze me in the least.

I liked how the play reflected on the stupidity of a culture that always is so focused on having fun at all costs. It has some clever social sarcasm, particularly in the first 20-30 minutes. The biggest cons were that the parking is absolutely horrible and I think the intermission really wasn't necessary. After the intermission, the rest of it is so short that it was a bit anti-climatic. When the play was over, I wasn't quite sure it was the end. I sat there for a moment and thought, "That's it? That's the end?"

Anyway, if you want to see it, you better hustle because there's only nine more performances. It's playing at the Son of Semele Theater, 3301 Beverly Boulevard in Silver Lake. Or you can go visit http://www.myspace.com/postfactproductions

As for me, I think I'm going for the green wig. After all, I am half Irish.
Email Post
Labels: art Los Angeles materialism theater

Jameil said…
avant hard? can't say that i am. the avant garde shows are always my fave!!! altho the making of kenley spears/a badussycat doll made me nearly wet myself w/laughter. def. my fave of the shows this season.
11:28 AM, October 28, 2008

Miz JJ said…
Heya I wanted to offer my condolences after hearing Hillary Duff masacre a classic Depeche Mode song. Try not to be too upset when you start hearing rap over Personal Jesus.

Liz Dwyer said…
Jameil,
That episode of PR was SO good. One of my favorites too!

Miz JJ,
The agony of the Hillary Duff Personal Jesus is only eclipsed by the Payless Shoes commercial using "Just Can't Get Enough". It's horrible!
8:56 PM, October 29, 2008