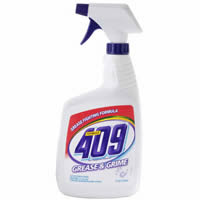 I just had a total Hollywood "What in the world???" moment!

Granted, this is a place known for public displays of total insanity, so I don't know why anything shocks me anymore.

For example, this morning I barely batted an eye at the guy dressed in military fatigues taking a leak on an Obama poster, even though he was aiming for the head.

I almost didn't notice the girl in Starbucks wearing a sequined shirt, booty shorts, ripped fishnets and flip flops. She was standing there like she really thought she was styling or something.

And, the guy wearing a business suit, cowboy boots and a trendy "Compton" trucker hat, standing around yelling at the taco stand guy in French? Whatever. That's just typical crazy or typical trying too hard to be hip. Not even the taco guy looked at all concerned or interested.

But when I see you walking down Fountain Avenue in a khaki skirt, a white dress shirt and red heels... and you're spraying household cleaners into the air in front of you, I'm concerned.

I almost crashed because I was so busy rubbernecking. I actually drove around the block so I could see Ms. Formula 409 Sprayer again. She wasn't talking to herself or anything. Just a little spray to the left, spray to the right action as she strolled. Folks cleared a path, probably because they didn't want to get squirted with the chemicals. And my dumb behind was all talking to myself in the car, "What is she DOING??? She's polluting the atmosphere! Can I call the cops over this? Does she think she's cleaning?"

Granted, the sidewalks are a little dirty in La-La Land these days. We haven't had a good rain in months, it's not like the city sweeps frequently, and the Santa Ana winds have been blowing dust in off the desert like crazy. It's been so dusty that on Saturday, I actually bought a Swiffer duster to use around the house! But you don't see me spraying Formula 409 on the sidewalks!

No, I didn't call the cops. I don't want to be like John McCain's brother and get the, "Ma'am, are you really calling about a woman spraying Formula 409 on the sidewalk?" Clearly, there are issues there beyond a serious cleaning obsession.

My husband soaks his fishing boots in it because it kills an exotic snail that migrates from stream to stream. You think?
2:05 PM, October 27, 2008

Anonymous said…
She must have got the idea that the way to deal with atmospheric pollution is to spray it clean as she walks along! Or maybe she thinks random spraying is the best way of keeping all the (other) nutters at bay? Either way she must get through an awful lot of Formula 409 bottles.
2:41 PM, October 27, 2008

Liz Dwyer said…
1969,
In NYC she'd probably be like Bill Murray's character in "What About Bob".

Shiona,
I always think I've seen it all but Hollywood never fails to surprise me.

Claudia,
I wish we had a stream! The only stream is from folks illegally hosing off their sidewalks.

Nick,
It's very true, even if you yourself have issues, you're gonna leave someone spraying 409 totally alone.

Citizen,
I think you might be right. Either that or it's a hidden camera reality show. One of the two.

Jameil said…
i don't think that'd be the most disturbing thing for me. yelling at the taco stand person in french? now that's just funny. i think i would wonder if the military guy had ptsd or was just a disgusting jerk.
11:31 AM, October 28, 2008

Liz Dwyer said…
Jameil,
I found myself wondering if military guy was even really a military guy. There's an Army supply store on Sunset Blvd not too far from us and sometimes folks take the "trend" a little too far and do head to toe fatigues.
11:44 AM, October 28, 2008

I don't know what to say.

Liz Dwyer said…
The Joy,
For once I did not have my camera and my cell phone takes crappy photos. Otherwise, I would've tried.

NYC/CR,
I feel like every time I drive west of Highland the balloon implant types are out in droves. Truly ridiculous.
9:16 PM, October 29, 2008