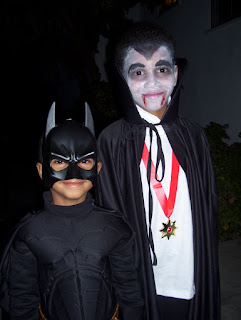 I'm sitting here with Dracula and Batman. Dracula just told me that he's not tired because he doesn't sleep till the sun rises.

Batman claims he's not tired because he's the Dark Knight and, "I prowl the streets protecting those who are in trouble... and then I sleep when the sun comes up."

Wow, who knew Batman and Dracula had so much in common?

SO, instead of sleeping, we're watching the movie "Gremlins' and inhaling the aroma of copious amounts of Halloween candy.

The former teacher in me assigned Dracula and Batman the task of sorting and counting all their Halloween candy. First we separated into two piles, chocolate and non-chocolate. Second, we sorted and counted according to specific types of candy.

They absolutely loved doing this, mainly because now they know exactly how many of each particular candy they managed to acquire.

Want to know what kind of haul a Dracula and Batman living in LA can come home with?
And then we got tired of counting! We didn't even get started on to all the random boxes of Nerd's and other assorted candies.

As for Dracula and Batman, they each picked one piece to eat and then the rest went back into a big pot. I don't think they could eat all that candy in an entire year. At least, I hope not!

Dracula and Batman's momma is so tired I feel like I could fall over. Putting on Dracula's makeup, getting Batman all dressed and roaming the streets for an hour and a half with them wore me out. I'm supposed to go run 7 miles at 6:20 in the morning. But how can I not watch a scary movie with my boys on Halloween Night? I'm gonna be up for awhile longer!

Oh, and if you need a candy fix, clearly, you know who to ask, but you better ask quickly. Dracula just told me he might set up a store to re-sell the candy. "And then I can use the money to buy new videogames!"

Anonymous said…
Well, we have Halloween over here but it's nothing like as fancy as the way you guys do it. There's a few pumpkins in people's windows, a few fireworks and that's it. I didn't even get any trick or treaters this year, which was fortunate as I didn't want to give them yet more of those tooth-rotting goodies! Judging by your household haul, they hardly needed them anyway....
1:48 AM, November 01, 2008

Remnants of U said…
Ahh,I get misty eyed thinking about my now 21 year old that is far far away in another country. Thank you for sharing Batman & Dracula and your Halloween night.
5:40 AM, November 01, 2008

Liz Dwyer said…
Nick,
Halloween is such big business here in the States! It's a little crazy! I think my boys came home with such loads of candy because Halloween was on a Friday and there were not as many kids out. I don't know if the parents left them with babysitters in favor of going out to adult parties, but a lot of homes kept commenting that they had lots of candy left over because there were less kids.

Remnants,
Aww, you're welcome. I think a lot about how pretty soon my boys will be too "grown" to go trick-or-treating. It's so fun taking them out. I really look forward to it every year.

Sundry,
I wouldn't count on it! Batman was terrified of Dracula's fangs and wouldn't walk down the sidewalk next to him, so Dracula had to be fang-less and just wear his natural teeth.

The Joy,
I remember going out a few years but then the Atlanta Child Murders happened and folks started putting razor blades in candy so my mom pulled the plug on it. And it is a LOT of candy. I don't know what we're gonna do with all of it.
7:59 PM, November 01, 2008

Shiona said…
Yum, Snickers and Dots. I will have to take my son next year to make that kind of killing. Or maybe not. I will just go to the store today since the candy should be half off right? My son will only be two next year. Best not to rush the trick or treating too quick. Kudos to you for actually making the costumes
10:04 PM, November 01, 2008

Lisa Johnson said…
Wow! That is just way too much candy! I do have a thing for Reese's peanut butter cups though and can't seem to stop eating them. I know it's wrong, but it tastes so right! :D

Oh and I actually did watch a REALLY scary movie on Halloween. Open Water is not your typical Halloween movie, but it still did the trick.
9:21 AM, November 02, 2008

Liz Dwyer said…
Shiona,
I first took my eldest when he was three. Before that, we just chilled at home and carved a pumpkin. I didn't make the Batman costume. That's a hand-me-down costume from my eldest. BUT, putting Dracula together was fun, especially doing the makeup!

Anali,
My youngest is CRAZY for the Peanut Butter Cups. He loves them. Open Water is a pretty frightening movie. When I first saw it I didn't feel so bad about my inability to get on boats without vomiting. I figured at least I won't be left anywhere like that.
3:34 PM, November 02, 2008

Unknown said…
Wow, that is serious haul! I remember my days of trick or treat and I can attest to having candy the following year. I am not a big candy eater but I got a thrill from having a big bag of candy.