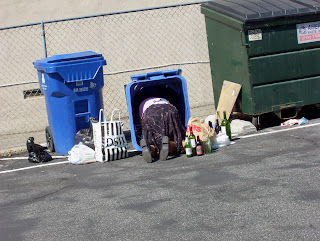 Today is Blog Action Day so I've pledged to devote my blog space to the issue of poverty.

Nowadays, everybody is complaining that they're poor. You know, it's, "I'm sooo poor I can't go to Starbucks every day," kind of poor. These are the same folks that tell you that if they can't buy a new car next year and instead might have to settle for a used one, they're poor. If eating out is gonna have to be a once or twice-a-week thing instead of three or four times a week, well, they are poor.

Poverty is, of course, a relative thing. Folks always want to say that compared to folks in other parts of the world, Americans aren't poor. But there is a LOT of poverty here in this nation, particularly among children. Whenever someone, usually with money, tries to assign blame to poverty, as in, "You're poor because you're lazy," I always think of children who cannot be blamed at all for their circumstances. And why should we blame other people anyways? Do we really think folks want to dig through other people's trash to find bottles that can be recycled for money?

There's a good entry on Wikipedia about poverty where you can read all the statistics about it. I hope that I am never in circumstances that necessitate me needing to reach out to folks for food, shelter or anything else. But for those that are, I am glad those services are there. I wish we all did more.

thailandchani said…
The issue of poverty is huge... and of course it is relative. At the same time, I can't get beyond the fact that any society that consumes more than its share of the wealth is contributing to it.

Band-aids will never solve the problem. It just covers it up. Changing from greed and grasping to sharing and cooperation is the only way it will ever change.

People who natter on about other people being "lazy" are truly so brainwashed that I'm not even sure they can be reached.

They may end up being the collateral damage when it comes to cultural change.

for my part, i turn to sites like freerice (rice donation), kiva (microfinance), and goodsearch (donation per search), as ways to help alleviate poverty online. i also put up their banners on my blog. :)

Jennifer said…
I teach in a school where I see poverty on the faces of children every day. It's a reality for so many who cannot change their situation. The meals we serve at school might be the only ones eaten by our students. And the weekends? Well, we send home bags of snacks Friday afternoon. Just in case.
1:22 PM, October 15, 2008

Anonymous said…
Wow. I hear you! So many people talk about poverty and have no idea what it really means.

I've received criticism in Denver Cereal because of things the girl does because she's poor. The people who criticize have no idea what it's like to be the working poor.

Anonymous said…
The British Labour government pledged when it was elected in 1997 to eradicate child poverty, but there are still millions of children living in poverty and the gap between rich and poor grows ever wider. Unfortunately the wealthy, including well-off politicians, like to hang on to their wealth and are always reluctant to pass it on to the less privileged.

The thousands of impoverished households in Northern Ireland are mostly ignored while bickering politicians prevent the devolved government from even having any meetings.
1:49 PM, October 15, 2008

Faith at Acts of Faith Blog said…
Yes there's a difference between 'feeling' poor because you have to cut back on excessive things and not having enough money to pay rent and buy food. Some people don't have fresh drinking water - that's poverty. I also wrote a post for this today. I would love if poor people were discussed by the candidates at least once before this election instead of middle class, middle class, middle class. I don't like the attempt at scapegoating Black people for this financial crisis either.
2:48 PM, October 15, 2008

Shiona said…
Great post. There is a lot being done but I think that there is so much more that can still be done. I hate it when someone makes a dismissive comment like "They should just get a job." like it's such a simple solution. Hopefully with the economy being the way it is people will appreciate what those who are in poverty are going through.
2:49 PM, October 15, 2008

Liz Dwyer said…
Chani,
We have unbelievable extremes of wealth and poverty in this nation. I always think about 90220 (Compton) and 90210 (Beverly Hills). What a difference one number in a zip code.

I think you're right about the brainwashing. To say such a thing requires a complete detachment from being human.

Kouji Haiku,
I like your blog name and the sites you're involved in. I've done more local volunteering but there's certainly some good ways to help out online. Thanks for coming to visit me today.

Jennifer,
I totally hear you. I used to keep food in my classroom for the kids who were still hungry after having eaten the school breakfast. Some of them hadn't had dinner the night before. Such a heartbreaking thing.

Claudia,
There are SO many working poor. It's insane. Folks aren't sitting around twiddling their thumbs. Nope, they're hustling, trying to make a little money to get something to eat.

Nick,
How sad that the disunity of some has such profound effects on the lives of others. We've had a war on poverty as well. I'm not sure how successful ours has been either.

Faith,
AMEN!!! You are so right about the attention paid to the middle class but nothing focused on the poor. I guess no one, right or "middle class" really wants to admit or address poor people.

Shiona,
I hope folks appreciate it too. But sometimes people are so quick to forget how they got out of hard times and instead they think they pulled themselves up by their own bootstraps, when they actually didn't.

nyc/caribbean ragazza said…
I think a lot of people are surprised to hear there is poverty in America as well.

One of my friends works for an anti-hunger non profit. There are folks who are really in need.

I hope during this financial crises more people don't fall through the safety nets.
4:06 AM, October 16, 2008