I know my on-line life has totally jumped the shark when I'm Twittering with characters from Mad Men. Not real people, characters.

If you are unaware, Twitter is a free social networking and micro blogging platform that enables people to post, in 140 characters or less, anything and everything under the sun. It often turns into all the random thoughts running through your head or the things you would say out loud if you could, but you know you shouldn't because you might get shot if someone overheard you.

Two of my recent "tweets" --Twitter name for a posting-- about a minivan-driving mom dressed head to toe in skull & crossbones Ed Hardy, are a perfect example of this:

Tweet One: Time for Ed Hardy to stop being a fashion trend. I'm tired of seeing women at the grocery dressed head to toe in that mess. 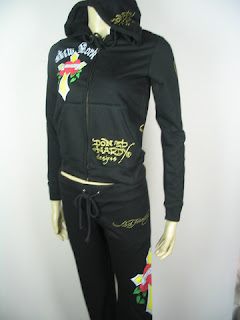 Tweet Two: I mean, lady, you are NOT a rocker. You are a woman driving a freakin' minivan so why the heck are you wearing a skull & bones hoodie?

You see what I mean? You're thinking it in your head but you simply can't roll up to the woman and tell her this without worrying about your personal safety.

Twitter has also turned into a fabulous way to talk in real time with other folks about everything from politics to pop culture. I "follow" people I know, blogging friends, and other folks I think are cool, and then we reply to each other's messages.

For example, every Wednesday when I watch Project Runway, I'm twittering my thoughts about what's happening on the show, all at the same time my Twitter buddies are. It's fun to "talk" about Tim Gunn, Heidi Klum and all the antics of the contestants, like that horribly rude girl, Kenley. Goodness, talking about Kenley was therapeutic.

Really, the whole Twitter thing totally reminds me of the kind of conversations I used to have back in my college days and early twenties. You know, when I could actually stay up all night talking about all sorts of nonsense with a bunch of really good friends. And of course, now I'm a mom that has to help my kids with homework and make sure they get in bed at a decent hour.

So what does this have to do with Mad Men? Well, I've watched Mad Men since the very first episode, and have converted friends and family members to being viewers. I love the show. Even though it's set in a different time (the 1960's) and place (NYC advertising world), the characters are incredibly relatable, primarily because they're neither totally evil nor pure as driven snow. Both extremes are boring and Mad Men gets it right when it lets us glimpse characters with more than that duality. And of course, while I'm watching Mad Men, I'm twittering my thoughts on what's happening on my Twitter feed.

This past Sunday night, I'd just finished typing, "Loove the whole deal on Mad Men with Paul and Sheila! Interracial love back in the day!" Suddenly, I got a message that Betty Draper was following my Twitter updates.

Um, how could Betty Draper have a Twitter account when she's not a real person? She's a character on Mad Men! In fact, she's the main character, Don Draper's wife. I clicked on her profile and, s 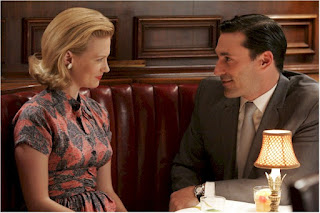 Clearly, the network that produces Mad Men, AMC, has set up somebody (or somebodies) to pretend to be the characters on the show and write Twitter updates for them. Before I knew it, I got "you're being followed" messages from a load of other characters as well. And because I love the show, I followed them back.

"Betty" writes stuff like, "Worrying about Daddy. How can William and Judy think it's a good idea to bring their unruly kids over to see him so often?"

If you watch the show, you totally "get" this, and so I replied, "Maybe they think it'll make your dad feel young again."

But how did "Betty" find me, you ask? Well, clearly,the TV network has also hired somebody to search Twitter for Mad Men related words. And then, once they find people who write about Mad Men, they follow us. We're a totally free marketing focus group. They can find out what we like about the show, the characters, which plot lines we're digging and whether we're totally scandalized by the budding interracial relationship on the show. --and clearly, yours truly is not. In fact, I'm cheering loudly for it to continue on!

And, because once someone is following you, they can see what you twitter about all the time, they can also find out that I watch Project Runway and talk smack about overweight housewives wearing head-to-toe Ed Hardy outfits at the grocery store.

Big brotherish? Absolutely? Do I care? Not yet, I think.

The only "off" thing about characters from a show like Mad Men having Twitter accounts is that, um, personal computers and the Internet didn't freakin' exist in 1962. So what am I supposed to believe that Betty is updating on? It sort of breaks the "bubble" of the show a bit.

In the meantime, I'm going to keep up my chatting with Betty Draper. She's a nice lady. Plus, even though she smokes like a chimney, at least she doesn't wear head-to-toe Ed Hardy when she heads to the store.
Email Post
Labels: blogging I know you think I'm crazy after reading this Mad Men presidential elections Project Runway twitter

nyc/caribbean ragazza said…
This is the one of the funniest things I have read!

What the hell is Betty Draper doing on line?

Liz Dwyer said…
NYC/CR,
She even had an Ed Hardy handbag. I don't think this is what Tim Gunn means by "Sweatsuit Alternative"! AAAGH!

The Mad Men thing gets even MORE bizzare. Now I'm not even sure if I'm being followed by the "real" Betty Draper or not. I just got a follow notification from another one! Really, does someone else not hired by AMC actually have the time to pretend to be Betty Draper?
11:45 PM, October 07, 2008

Anonymous said…
So far I've resisted Facebook and Twitter as I spend enough time blogging as it is. I also twitter enough to myself as it is. And that's several rave reviews of Mad Men I've seen, but I'm still waiting for it to turn up on our TV screens.
1:14 AM, October 08, 2008

Ian Lidster said…
Love Mad Men. The chainsmoking, the boozing, the screwing around. I was in my teens at the time it took place, so the characters are roughly my parents' generation. It's not too exaggerated, believe me. But, what hollow lives, especially the women, lived. Viva the pill, I say, because it changed so much for women -- for the better.
Twitter sounds like fun. Must check it out.
9:09 AM, October 08, 2008

Liz Dwyer said…
Anonymous/Nick,
Both Facebook and Twitter are amazingly fun because they connect you to other people. Time-sucks, yes. I resisted both for awhile but eventually capitulated. I don't regret the decision. I hope you get Man Men on TV soon. It's worth watching. LOL, I believe you on your not hung-over-ness!

Sundry,
Stop resisting and you too can follow Betty Draper's updates.

Ian,
Oh my goodness, the lives are so constrained, so hollow. No wonder folks lost their damn minds later in that decade. They were at one extreme at the beginning and then swung to another at the end of it.
9:23 AM, October 08, 2008

Anonymous said…
It also keeps you watching promptly (which I totally would be anyway!) because otherwise your Twitter might have spoilers.

Liz Dwyer said…
Lizriz,
That's a great point! I've noticed that if folks on the East Coast are twittering about something and it looks good, I'm more apt to watch it.

BUT, someone pointed me in the direction of some links that make me think that these twitterers aren't supported by AMC at all. They're just fans. Wowzer.
1:06 PM, October 08, 2008

I had a twitter for 5 seconds but deleted it because I could never remember to update the darn thing.
3:39 PM, October 08, 2008

Jen said…
Okay, so this had me on the floor!

My friend had a job running message boards for a *very* popular teen show a few years back. She had this whole persona thing she was supposed to do - it was pretty funny. I'd go on those boards just to goof on her.

I think I might have to back down and do Twitter if there's good debate commentary. I've been resorting to sudoku so I don't throw something at the television.
4:08 PM, October 08, 2008

Anonymous said…
I didn't know you did Mad Men. Wow. That show totally trips me because I swear my Grandfather was on that show! ;)

Liz Dwyer said…
1976,
LOL, I hadn't seen those sites! Love it! I really love how Joan's character is showing that you don't have to dress or move like a stripper to be sexy.

You know what got me hooked on Twitter? Text updating! Love that!

Jen,
That's so funny about your friend having that persona! It must have been fun. There has been really good debate commentary on there... but it could also be the folks I've chosen to follow. I'm sure there are other folks just writing, "Just brushed teeth," and that type of thing! ;)

Claudia,
You're hooked on Mad Men as well! Love you...And your Grandfather! It must be amazing to be acting on that show. There were clearly fun things about that time but some serious repressed craziness as well. It's like a window into the past.
10:13 AM, October 09, 2008