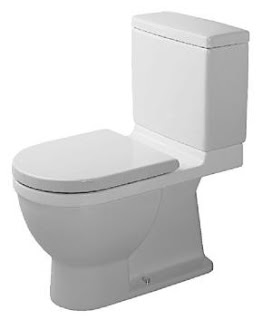 Once upon a time in a land far away there lived a Mama Bear, a Papa bear and two wee little boy bears. Their home was in a fabulous location with lots of light, plus it was rent controlled. But one day Mama Bear went in the bathroom, took one glance at the toilet and absolutely lost it!

"Papa Bear! Eight Year Old Bear! Six Year Old Bear!" she called. Can you three come in the bathroom, please?
Moments later, Papa Bear and his two little boy bears shuffled into the bathroom.
"Which one of you pissed all over the toilet?" Mama Bear asked?
"Not me!" said Papa Bear. "I'm a grown up. I'm too old to miss the bowl."
Eight Year-Old Bear nodded his head in agreement. "I'd never do that," he said. I'm a candidate for sainthood, and besides, I prefer to pee in bushes. That's more natural and eco-friendly."
Mama Bear turned her eyes on the youngest and smallest member of the family, Six Year-Old Bear.
"Noooo! It wasn't me! I swear! Hee hee hee!" giggled Six Year-Old Bear. "I promise! It wasn't me!"
Mama Bear narrowed her eyes at the three male bears standing in front of her. "So the pee just magically got on the top of the toilet seat? And who doesn't even let the seat up these days? That's just gross."
Again, all three bears denied they'd been the one to whizz all over the toilet seat and Mama Bear grew more frustrated with their denials. Finally she shooed all three male bears out of the bathroom and dug some cleaning products out from under the sink.
That night before she went to bed, Mama Bear prayed to the supreme being. "Oh, Goldilocks! Please send me a reasonably priced new home with two bathrooms. I can't take pee on the toilet anymore!"
Will Goldilocks answer Mama Bear's prayers? Will Mama Bear go on bathroom cleaning strike? Tune in next time for more Bear Family Adventures!
Email Post
Labels: cleaning I know you think I'm crazy after reading this kids toilet

Remnants of U said…
Oh, my heart went out to you when I read the title. I wasn't willing to share 1 bathroom with my 1 son.

Can Mama Bear assign chores and the little bears clean the bathroom when they get home from school? It may make them a little more aware of Mama Bear's plight.

Okra n Tomatoes said…
This is why my girls use one bathroom (mine) and the boys (daddy included) use their own.

Want me to loose my mind? Let any of these males walk into my bathroom...its on and popping, and a fury begins like none other.

I also make them clean their bathrooms. I'm not doing it...no way.

Anonymous said…
May your toilet wishes be granted. And remember, as a member of their sex, they mean well, they're just male. I've always advocated home urinals.
11:02 AM, January 11, 2010

Cynthia said…
My son has been fully trained on the toilet ethics I require. Mind you it did take some time and not so much patience on my part. Whenever I would find those little yellow puddles I would call him over to the toilet and make him thoroughly clean it, after several cleans he finally figured out what a pain it was to clean vs. simply lifting the toilet seat and aiming directly. I wasn’t like he had to pee in a thimble for crying out loud. Now the difference between me and you is, I am a single mother with only one son, so I automatically know who the culprit is, and I rarely have to experience the “Not me dilemma”, however I do frequently have my nephew’s visit, so I posted the following sign above the toilet in plain view...........

nick said…
Cynthia seems to have the right idea. Whoever the culprit, get them both to clean the toilet (half each, maybe?) so they realise peeing everywhere isn't worth it. I certainly hope you can train them to use the toilet properly, there're quite enough sloppy adult males spraying toilets as it is.
1:52 PM, January 11, 2010

I feel your pain. My sister has 2 boys but she does have her own bathroom. Still, when I'm over there and mosey toward the common bathroom (the boys' room) she will often head me off in a panic, yelling "it's not clean!" and make me go through her bedroom to use her bathroom. I think I have to vote with Cynthia's suggestion to make them work together to clean the toilet. (I know, then you have to supervise, but I think it must be done.)
2:42 PM, January 11, 2010

Nina said…
One toilet between me and the three boys in our house would drive me insane. (Maybe next time you could assign all three of them to clean up? Papa Bear could supervise/help the Little Bears? Though hopefully no next times?)
2:58 PM, January 11, 2010

1969 said…
Our boys have their own bathroom and it's just as bad. I swear I scrub that bathroom every other day and it always smells like pee.

Making them Sit their butts Down! All 3 of ‘em!

And that you’ll be Checking!

(PS. My problem is the Girl! And all that hair-chemical, greasy, sticky, nasty stuff that makes every dust particle, hair follicle and piece of lint stick to everything! And produces a Superfund Site oil-slick in the sink and whatever tub/shower she uses. I actually Fell Out of my own shower after she’d washed that oily mess in there and I didn’t know it – stepped in butt-naked after a run (don’t think about that part, lol) and it was so slick I shot right down and back out! I want a stainless steel bathroom for her; like a restaurant, I’ll just hose ‘er down, floor-to-ceiling and everything in between. My son’s real clean and neat and tidy – like Dad, lol!)
4:43 PM, January 12, 2010

Liz Dwyer said…
Remnants,
I've assigned chores in other parts of the house but not the bathroom. Their version of a clean bathroom seems to be quite different from my own. It's a struggle to get towels hung up and clothes picked up off the floor. Drives me insane.

Okra n Tomatoes,
I never understood why my mom had my dad use a separate bathroom, but now I do. Even now with no kids they STILL keep separate bathrooms. It has to get better but I need Papa Bear to back me up. He's horribly messy tho. I need him to back me up on it but I don't know if it'll happen.

Houseonahill,
But I can't tell you how many times I've sat on a wet seat. GROSS!!!

Cynthia,
Yeah, the "not me" thing was killing me. I'm surprised one of them didn't suggest that maybe a ghost did it! I should post that sign, too. And make them scrub the whole things with a toothbrush. (or would that be too hardcore?) ;)

Nick,
I really like the idea of having them share cleaning duties if noone will fess up!

Anonymous,
I kinda wonder if it was him, too!

Lisa,
LOL, it sure does give new meaning to it! I seriously think home economics needs to return to schools with a crash course in toilet etiquette!

Nina,
I've threatened cleanup duties and so things improved last night and today. Maybe just the threat of having to clean it will keep things in check?

1969,
Oh yes, I am cleaning in the bathroom on a daily basis to avoid that smell. I have a super sensitive nose and am phobic about bathroom germs. They had it looking like a gas station bathroom in there the other night. It was horrible!