I'm Going To Become a Complainer 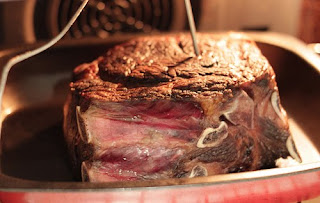 Normally, I try to accentuate the positive and not dwell on the unpleasant things in life. For example, I'm running 24 miles on Saturday. My attitude? GREAT! Bring it on, suckas!
But then I went and read the great Mr. Write On's griping meme and I figured it wouldn't hurt to cross over to the dark side and give complaining a whirl... especially since I've been feeling a little Michael Corleone-ish the past couple of days. So here goes my foray into complaining about the irritating, annoying stuff that makes me want to dig my eyeballs out with a binder clip:
1) Foods which disgust the crap out of me: No vegetarian wants to see food porn pictures of your rare steak. I don't "get" green bean casserole, cream of mushroom soup or anything made with Hamburger Helper. I also feel nauseous if I catch even a minuscule whiff of papaya and I haven't eaten Taco Bell since I was 14.
2) Movies/TV shows I loathe: I can't stand the Bad Girls Club. Has there ever been a more insipid show? I also completely boycott the Fox network so there's no point in asking me if I like Glee or American Idol. As for movies - I hate everything with Tom Cruise. That dumb as rocks Magnolia movie robbed me of hours of my life. Frogs raining from the sky? Really?
3) Music genres I loathe: For the purposes of this question can Taylor Swift be a genre?
4) Magazines that annoy me: 90% of them. I can't take another actress doing her sexyface on a magazine cover that's splashed with schizophrenic amounts of insecurity-based self-help and materialism.
5) Makes me cranky: People in the Trader Joe's parking lot who get all hysterical and road rage-y over a spot but then go inside the store and put on their "I'm a nice indie hipster who recycles my dental floss," face.
6) Makes me cranky II: The way people talk on NPR. I know they've been made fun of before but really, do they go through voice training to learn how to talk in such a monotone, un-diverse sounding manner? I'd rather watch CSPAN with the volume turned down.
7) Pisses me off: People who complain ad nauseum about how President Obama isn't living up to expectations and didn't transform the world in one day. Folks need to grow up and look at their mayor, city council, governor and state legislature. For example, is Obama responsible for the mess those entities have created in California? I don't think so.
8) Makes me impatient: When someone I'm married to asks me if I'm ready to go and then I end up waiting in the car.
9) People I hate: I try not to spend my time hating anybody. I prefer to be indifferent to them which is, in my book, worse. That said, there is the aforementioned irrationally intense dislike of Tom Cruise.
10) I could care less about: Nude pictures of celebrities or their sex tapes. They have the same body parts that you and I do, so I don't get why everybody gets thrown into a tizzy when nekkid pictures escape from a phone or computer. I don't want to see it but seriously, it's not the end of the world.
11) Annoys the crap out of me: Passive aggressive people. If you have something to say, man up and say it. (or, er, "woman up".)
12) As a final source of irritation: Folks who diss Depeche Mode are on my ishtar list. When I tell you this is my favorite band and I've loved them since I was 11, that's not your cue to say, "Eww, really? They still make music?" or, "Gosh, I wouldn't have pegged you as a Depeche Mode fan. I mean, you're not white or gay."
Now that my griping is over, I guess I feel better. And if my list annoyed you, I don't care!
photo: RobsonBarista
Email Post
Labels: about me Barack Obama complaining Depeche Mode food Movies Music NPR Tom Cruise Trader Joe's TV vegetarian

bloggist963 said…
You're killing me, Los Angelista. With laughter, that is. I have to disagree with complaint # 2, I love Glee! We have complaint #s 5, 6, 7 and 11 in common. Complaint # 6 is my favorite, though. I'm so glad I'm not the only one wondering about the NPR "android" voices :-). I have to add my own complaint here. I can not STAND drivers who do not use their turn signals and then come to a standstill to make a turn. My blood boils just thinking about it.
5:42 PM, January 27, 2010

Val said…
#2 As for Glee, it's full of stereotypes. So you aren't missing anything.

Liz Dwyer said…
bloggist963,
Seriously, what is the deal with NPR and those dead-sounding zombies they have on there? I think they think they sound smart. Makes me want to inject them with something illegal just to see what would happen.

Jameil said…
I love Glee!!!!!! But I can imagine you feeling the opposite. Why are you boycotting Fox? ROTFL @ The way people talk on NPR!!! RIGHT!?!! Why do you sound like that??? You're the leading news radio outlet and you sound like you hate life and everything in it. Horrendous. lol @ your dislike of rare steak! never even considered veggies would find that disgusting but it's so obvious! i like the color contrast but since i don't like steak, i never want to eat it no matter what the pic shows. do other meat pics gross you out?
8:43 PM, January 27, 2010

nick said…
You're so right about those magazines. The contradiction between saying how brilliant a woman's life can be and then feeding all her insecurities is absurd, yet everyone laps it up!

One thing that makes me cranky is the endless obsession with celebs and superficial trivia rather than the serious issues like poverty and foreclosures. I know we all like to be cheered up, but a bit more social conscience wouldn't go amiss.
1:12 AM, January 28, 2010

Kristen Howerton said…
This is hysterical! Truly. I agree with you on all points (except for Glee). Seeing Tom Cruise in interviews makes me want to punch him in the face. And the hipsters on NPR sound like a bunch of whiney emo teenagers. Not that I stop listening, but it bugs.
2:19 PM, January 28, 2010

Liz Dwyer said…
Jameil,
I boycott Fox because it's owned by Rupert Murdoch - I can't complain about Fix News & then turn around and watch his TV network!

Other meat pics are a little gross but none so much as steak pics.

Nick,
We are in celeb trivia overload these days, but they never tell me the stuff I want to know... like what does Sade use on her skin to keep looking so young? ;)

D,
Ha! I probably say I could care less all the time. I say all sorts of grammatically incorrect things all the time, as well as cultural/regional things that I've picked up over the years. My husband has started saying "cut the light out" instead of "turn off the light" because of me!

Dena,
LOL! Yep, that sick feeling you have is a fraction of how I feel when I see it on the plate of the person sitting next to me.