On The Fourth Anniversary Of My Brother's Suicide 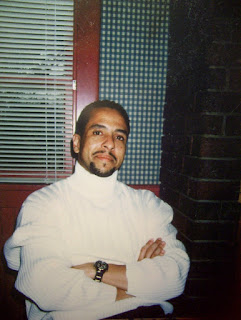 Today it's been four years since my brother committed suicide. Four years since his soul separated from the physical shell and went home. But sometimes I think I see him.

He's been in a crowded restaurant, sitting two tables away from me eating his dinner. I've spotted him walking along Venice Beach skipping rocks into the ocean. I've stood in front of him in line at my local cafe and hovered as I heard him order a fancy coffee drink.

I always stare at him. He often stares back with a look on his face that seems to say, "Who is this weird woman staring at me?"

Once he approached me and asked, "Do I know you?"

Because of course, the person I am seeing is not really my brother. It's only someone who so closely resembles him that on a first glance I think it's him. And then my heart breaks when my brain finally connects the dots and I realize the man I'm staring at isn't my brother at all. He's just a stranger who thinks I'm insane for looking at him so intently.

Sometimes I cry when I realize it's not him, but more often I'm glad it's not. I believe in an afterlife, and in the progress of the soul, so whatever he's experiencing now has to be better than any restaurant or walk on the beach.

FruFrugal said…
So sorry to hear of you've experienced this type of loss Liz. I have three older brothers and I can't even begin to imagine how this feels.
8:00 AM, January 08, 2010

Jameil said…
It's pretty amazing that you can so clearly put your feelings into words in a few sentences. I hope your brother's finally at peace, too. One of the subjects in my thesis films committed suicide and 40 years later his family still gets choked talking about him sometimes.
8:28 AM, January 08, 2010

nick said…
I remember you writing about your brother before, Liz. The fact that you so often think you see him shows how painful the loss still is. As you say, if he has gone on to another life, hopefully he is happy and at peace.
9:21 AM, January 08, 2010

Elise said…
Sorry Liz. I know about the mistaking other people for someone you've lost. After my father died I thought I saw him in a restaurant. I was up and halfway across the room before I remembered.
It's been more than 15 years now and though I don't see him in crowds anymore I do occasionally see him in a dream, and it's lovely to sit and talk with him there. Hope you get that too.
You and your brother will be in my thoughts today.
9:24 AM, January 08, 2010

On a limb with Claudia said…
I'm so sorry for your loss. I think suicide is especially hard - how does one get over the Why?

Liz Dwyer said…
Kim,
Thank you for saying so. More and more I feel that he's at peace. To think otherwise is just awful.

FruFrugal,
I never could imagine either before my dad called me and told me what had happened. And I can't even begin to imagine how my parents feel.

Tafari,
Thank you. I needed that.

Diane,
Thanks for the hug and for the good wishes.

Jameil,
I cried a lot when I was writing this. So much so that I gave myself a headache, but it's better to get it out before I go to work, I suppose! I can imagine still being choked up 40 years later. It's less painful every year, but still such a sad thing.

Nick,
I think I see him at least once every month to six weeks. When he first passed, it was every fortnight.

Elise,
Isn't a strange thing when you catch yourself and realize it's not the person you're hoping it is? I haven't dreamed about my brother yet. Your dreams about your father must truly be special to you.

Claudia,
As time goes on, the why doesn't get any clearer. I have the reasons I think but none of us will ever really know why. Even his suicide note didn't help me understand.

April,
Thank you, April. It means a lot.

Jessica,
Thank you. I sobbed a whole lot today, too. I think about him every day but today and on his birthday especially.

Elita said…
I am sorry for your loss, Liz. I truly do believe your brother is at peace now. I think some people's souls are too sensitive for this world. I am sure he is around more than you think, watching over you and your family.
7:06 AM, January 09, 2010

Anonymous said…
I would like to offer you my sincere heartfelt condolences. Grief can be incredibly complex and painful. Coping and overcoming is seldom easy, yet you seem grounded, focussed and strong. Maybe privately the consequences are worse than you publicly show. I will pray for your soul and ask the great one to give you compassionate good fortune, sound emotional wellbeing and that, you may be delivered from your bad experiences and memories of misery. Your brother is with you everyday, that's why you sense him and see him so much. He guides and protects you and helps you to succeed, with a love that is so beautiful and pure you may not believe. He is forever, remembering the past, of joys and tribulations, where actions, regrets and happiness are all mixed into one. He wants you to know that he loves you deeply, so very very deeply. He is a kind, caring and gentle soul who would move mountains to help you out. The success that you are about to have over the next few years will be helped by your brothers presence because he will never leave your side and he will never stop fighting your corner. Strangely enough, I often see my mother and I burst out in a warm indescribable glow of warmth and comfort, and then, when reality hits me, I have a strange melancholic feeling that soon grows into even more hurt and regret in the realisation that it wasnt her afterall. It was just a figment of my imagination. All of my senses just lied to me all at the same time. I have hoped against hope that it was her but of course it never was and I'd console myself with self pity and a wry smile. Often I have wanted to hug them just to feel that familiar warm hug of love, that only mothers can give, but fortunately I have resisted that temptation so far. Imagine getting arrested and trying to explain that to the judge and jury?
Keep going Liz, you inspire me and so many people with your creative writing skills, your grasp of humanity, your piercing asute observational social commentary and your abilty to overcome the unovercomable.
One love
7:46 AM, January 09, 2010

Unknown said…
my dear liz, this is one part of your life story i was not aware of, and i'm a beginner in following your blog. thank you for sharing your heart...and your brother with us. i don't think i ever told you but my grandmother committed suicide when i was about 18. she lived with my family from about when i was 5/6 yrs old and i shared a room with her, sometimes we shared the bed too - that is how close she was to me. she helped my parents to raise me and my siblings. she was an incredible woman and i am grateful to be able to recognize that now; though when i was younger...well you know...i didn't "see" her. and she obviously didn't "see" herself. one of my memories of her was waking up in the middle of the night and not being able to fall back asleep and i woke her up as she slept peacefully next to me. "Po-Po. Po-Po. (in chinese as she spoke no english) I can't sleep." she gently guided my body to sleeping position and patted and stroked my back and thigh. no yelling of me for waking her up. no judgement. just instant loving "rescue" of my situation . anyhow, just sharing from my heart. and it's always comforting to know that my Po-Po is now free and i always pray that she sees clearer and clearer the amazing woman she was in this world. may your brother soar in the Light and recognize clearer and clearer his soul's noble station too. love, n.
7:47 AM, January 09, 2010

Kristen Howerton said…
I am so sorry to hear you have experienced such a devastating loss. Much peace to you.
8:09 PM, January 10, 2010

Liz Dwyer said…
Elita,
Thank you for your thoughtful words. I definitely believe the souls of those who've passed on watch over us.

Anon,
I so appreciate your thoughts and prayers. I am not always someone who lets the world into what I'm thinking or going through and I struggle with sharing the inner sadness and regret I feel over things like this. My brother made so many mistakes in this life, as do we all, but I can only forgive him now that he's passed on. The way you described your feelings about seeing your mother, and then realizing it's not her, I can relate to that a whole lot. I suppose knowing that death is a joyous thing in the end, because the next world is better than this, is what makes me feel hope for him.

Nancy,
Thank you so much for sharing your experience with your grandmother. So heartbreaking, but the memories you shared of her are so touching, so full of light. Love to you.

Nina,
Thank you so much. It is hard. Definitely is.

Lisa Blah Blah said…
You have written about your brother before, always eloquently, and I can't even imagine how hard it must be to deal with a loss like that. It must be kind of bittersweet to be reminded of him when you see people who resemble him. Hugs...
2:47 PM, January 11, 2010