If You Own Booty Pop Panties You're Trifling 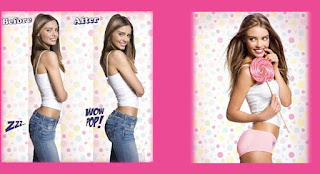 For those of you not genetically blessed with a round, lovely, Sir Mix-A-Lot-worthy gluteus maximus, welcome to the era of "Booty Pop Panties".

Yes, that's what these undergarments are really called. I just saw the commercial or else I wouldn't believe they actually exist. I had no idea padded booty-enhancing underwear has become so mainstream it's now in the esteemed annals of As Seen On TV products. Right up there with the Ped-Egg and the Magic Chop.

"What I love about Booty Pop is the lift and the shape and the roundness" - Um, except that your lifted booty is totally fake! Take those underwear off and you're left with the same flabby, pancake-flat rear you started with.

I wonder, what's next? Padded underwear for men? Yeah, just wait till men start wearing Penis Pop Panties. "Forget socks and Viagra! Get the Penis Pop Panty!" Can't you just see the commercial for that?

Despite the Booty Pop promises, I think I prefer to do squats so that my butt is genuine. And if it's not a perfectly round perky booty, so what? Who cares? I'm not trying to get people to pay attention to my rear. Even if society doesn't want me to know it, I am more than my behind.
Email Post
Labels: commericals Signs of the Approaching Apocalypse TV

Call Family said…
OMG-I'm crying over here!!! To think that flat bottom girls wanna be "fat bottom" girls. Now, if we could just make it popular for the "pop" to be placed under the buns (saddlebag style)...I could model for them!!
1:01 AM, January 03, 2010

nick said…
It amazes me how "shaping" underwear" has become so incredibly popular once again, despite the discomfort, inconvenience, sweatiness, bedroom embarrassment etc. We've come full circle from the feminist heyday of the sixties and seventies when women were not only discarding their corsets and girdles but their bras also.

Enhancing what you already have is one thing, but faking something completely non-existent is another. I don't know why men go along with it.

Jennae @ Green Your Decor said…
As a black woman who was born with a pancake flat, don't-look-back-there-cuz-there's-nothing-to-see behind, I can honestly say this is the most ridiculous thing I have ever seen. Even with all the squats in the world, I will never have a round, firm butt, but I'm OK with that. What's the point of having a round butt that will get a man to notice you (per the commercial) if the butt will just disappear when you undress?

Yeah...the booty pop panties are officially trifling. And fake-looking. After being teased and called "flat butt" and "nassatall" from elementary through high school, I eventually learned to get over it and be happy with what I (don't) have.

And FYI, I'm sure a lot of men will think these look fake too. My husband almost fell over laughing that anyone would think these things look natural.
6:42 AM, January 03, 2010

Remnants of U said…
I am in shock that someone would pay $11,000 for surgery to enhance the booty. But I guess all plastic surgery is expensive.

Liz Dwyer said…
Call Family,
Haha! Yeah, apparently the "pop" is only alright if it's in certain places on the rear. I don't think I qualify either! :)

Nick,
You don't want a pair of penis pop panties? I should try to market them... they'd be a bestseller somewhere!

It is interesting to see a lot of the shapewear of yesteryear making a comeback. Nobody wants to call them girdles tho!

Jennae,
You mean not ALL of us sistas have King magazine cover worthy rears??? I'm OK with not having that sort of behind, either. Mine always got blamed on, "Her daddy's white..." Such stupidity - we come in all different body types, too.

As far as the fakeness, I suppose the thinking is that by the time the man undresses you, he'll be so caught up in the throes of passion he won't notice that the "pop" has disappeared. But if you need to attract someone with fakeness, what kind of relationship is that gonna be? Or maybe a relationship isn't the point at all. Maybe it's all about the, ahem, booty-call.

J'taimee,
I know. Isn't it ridiculous?

Remnants,
I'm in shock about that cost, too! Especially since depending on how well you do/don't take care of your body, the surgery is only a temporary fix.
10:36 AM, January 03, 2010

Jameil said…
lol. this commercial cracked me up! my sister was borderline offended. better than getting butt implant surgery! at least she can have a booty today w/no pain! b/c you know there's some chick out there for whom no amount of squats will achieve booty popness. Yes I said booty popness. Lolol. Let some woman who doesn't have that popness and wants it have her fake booty, Liz!
8:33 AM, January 04, 2010

On a limb with Claudia said…
Boy... you'd hate to do a lunge or a romanian dead life. I mean really why life a finger when you can buy these pads or better yet, get them surgically implanted like Coco!