Thank You, President Obama, For My 24 Mile Run 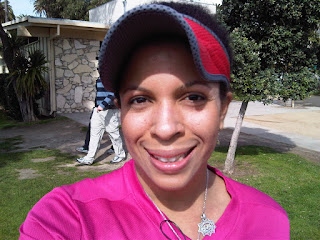 President Obama said that during his first State of the Union address and I've made it my mantra all week.
It was running through my mind at 4:15 this morning as I contemplated whether to shut off my alarm clock and get up, or snooze-button it for another 15 minutes.
Bang-bang-bang-bang -and then two more - bang -bang. Gunshots rang out in the early morning darkness. Moments later the scream of LAPD sirens echoed across the hills, and it was clear that sleepy time was over. My mental preparation for running 24 miles had to be put on pause.
I needed that mental preparation because my last really long run, a 22 miler three weeks ago, really sucked. My stomach cramped up something terrible and I ended up walking most of the last three miles. It was the WORST run I've had since I started running in 2008... and it's a little hard to believe you can do an even longer distance when the most recent long-distance run you've done kicked rocks.
But, I don't quit and one bad run don't stop no show so I ate my peanut butter on toast, drank water, made my cup of Earl Grey, got my running supplies together, took my allergy medicine and headed out the door into the darkness. The full moon was shimmering over the western sky as I zoomed along the 10 freeway toward Santa Monica listening to some DMX. Yeah, that's right, DMX. I needed a lil, "Grrr! What's my name???"
I met up with my running group but, ahem, I had to really pee because I drank all that water and the tea. One bathroom was locked and the other had an insanely long line. So, shh... I decided to go find a clump of dark bushes to, um, "hide" in. The first clump had a homeless guy sleeping in it-- sorry for stepping on you, dude -- but the second clump was a winner so I handled business and headed back to the start.
First we ran north along the beach bike path. I loved watching the moon's reflection shimmer on the surface of the Pacific but after a couple of miles we headed back south and into the sunrise. We ran through Santa Monica, through Venice, around the marina in Marina del Rey, through Playa del Rey and when we hit Dockweiler beach directly west of LAX, wow, the planes taking off over our heads were amazing. We turned around just north of Imperial Highway to head back the way we'd come.
While we were running, someone else in my group brought up how marathon running (and training) is 70% mental and 30% physical. I'd like to think it's a more even 50/50 split because of all the midweek training I put in between long runs, but whatever the percentage, the mental makes a huge difference.
This week I read a good article called "Breaking through the wall" about how the proverbial wall that many marathoners experience is mostly mental. I love the first sentence: "Just when you think you can't go any farther... you can."
"We don't quit. I don't quit."
This ended up being one of the best runs I've ever had. The photo above is me a couple minutes after I finished - no hobbling across the finish line. I felt so good I could've run another two miles, no problem.
Sometimes I think that if there's one word to describe my life, one theme for what I'm about, it would be perseverance. I don't let other people (and their issues or fears) stop me. If it's hard, bring it on. -- Not all at once, mind you! I'm not sadistic! But I like the challenges. I like pushing through the tough parts so I can come out on the other end of things, and I don't mind if my legs are a little sore post-run. I don't mind sitting in a bathtub full of cool water and then dumping in a 20 pound bag of ice. Is it cold? You betcha! But the Pasadena Marathon is in three weeks and LA is in seven and, well, I like medals.
Thank you, Mr. President for the mental inspiration to get me through my 24 mile run. Don't be surprised if you see me on LA's race day, March 21st, wearing a custom made shirt that says "I don't quit," on the back.
PS: Yes, the front side will say Depeche Mode is awesome!"
Email Post
Labels: Barack Obama Depeche Mode los angeles marathon perseverance Running

The Moon Topples said…
Congratulations on your run (and your successful bush-peeing, I suppose).

Did I tell you that I actually caught most of the Depeche Mode set at Lollapalooza this year? Far better than I had feared. For a big, arena set, those guys know what they are doing.

The Kid In The Front Row said…
This is a great post, you're awesome! I admire your dedication and perserverance!
2:34 PM, January 31, 2010

Anonymous said…
Congratulations you are achieving, excelling and attaining your goals. If you believe it you can achieve it. You should get your husband and your boys running with you, its a great way to bond and promote the values of family, aswell as, promoting a healthy, fulfilling lifestyle. I cannot imagine you peeing in the woods! Lol....
3:22 PM, January 31, 2010

On a limb with Claudia said…
I love your running posts. Someday I'm going to feel this wonderful running - I hope! :)

Liz Dwyer said…
Moon,
Hey, glad you came by to say hello. You are so lucky that you got to see DM at Lolla last summer. And that it stopped pouring rain before their set. I agree, they know what they're doing...even if they lost at the Grammys AGAIN tonight!

Kid,
Aww, thank you for saying I'm awesome! I've learned the hard way that there are no shortcuts to marathon training. No Cliff's notes... so it's a great lesson in perseverance.

Anon,
I was pretty desperate! Those bushes were my saving grace! Sometimes my boys run with me now - we'll run 1 min and then walk 1 min. They're both pretty fast! I told them yesterday that when they get to be teenagers we're going to run a marathon together.