Armageddon Week: The Depressing End of the World 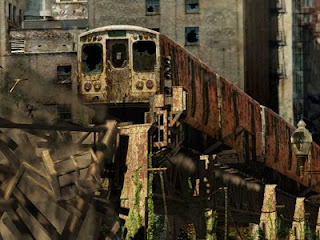 A few minutes ago I was sitting on my couch asking myself, "Los Angelista, why do you feel so nervous and depressed?"

At first I wondered if I was experiencing residual withdrawal symptoms because my Internet was out for over three hours this evening. It keeps going out and AT&T won't do anything to fix it. Tonight when I asked for a credit on my bill, the customer service rep essentially told me to suck it. At this point, only my hatred of Time Warner cable keeps me from dumping AT&T.

Anyway, forget those other corporate meanies! You see, I realized my depression is the result of it being "Armageddon Week" on the History Channel.

This week is a marathon of all the "Life After People" episodes, the Doomsday 2012 prophecy shows and everything Nostradamus. But in case those depictions of society falling apart aren't disturbing enough for viewers, now there's an extra special two-hour show, "After Armageddon."

The show is a fictionalized account of the experiences of a family trying to escape from Los Angeles and survive after a global pandemic hits the United States. My goodness, it's depressing...and terrifying.

It's so terrifying it actually has a disclaimer that flashes on the screen at the very beginning and again after commercial breaks: "This program is a theoretical account of the worst case scenario for a global disaster. This is not a real emergency."

My "oh really now?" meter went way up when I noted that most of the survivors are white, but I still feel like I need to enroll my kids in Boy Scouts so they can learn how to build a fire and survive in the wilderness. And is there an adult version of scouting so I can learn that, too? Oh, wait, I guess I should watch another show coming up on the History Channel's Armageddon Week: "Apocalypse Man". That features an Afghanistan and Iraq War veteran showing us how to survive after an apocalypse.

Why so much obsession with the end of the world? Why do we need a gazillion shows about the apocalypse or about epic disasters? It's not that I don't think these things are impossible events. Anybody who saw what happened in New Orleans after Hurricane Katrina knows that it's possible, and that you have to know how to survive. But why not have shows depicting what the world would be like if we had more unity and peace in it instead of complete chaos and anarchy?

I know people are feeling that our society is rapidly accelerating toward complete destruction, but there are so many good people, things and ideas that are out there. And yes, I know I could turn the shows off, but there's that train-wreck factor. Which means that after an evening of The World Is Going To End And You're Going To Die, I feel a little down.
Email Post
Labels: apocalypse Armageddon end of the world history channel Katrina Los Angeles New Orleans TV

Kim Moldofsky said…
Yes! I saw a commercial for this yesterday and was like, "WTF?" Then I switched back to the unicorn channel.

I can't wait to hear about your new job-it sounds great. Do you have pierced ears? If yes, I have a special going back to work gift for you.

Also, I must thank you for inspiring me to make it through the entire month of December without gaining any weight! I'm not training as hard as you, but I have been exercising and eating healthy. I was definitely inspired by your post at the beginning of December.

BlackLiterature said…
I think we "may" be in the same age range/demographic. Do you remember all the atomic war movies back in the 80's. I feel like there were sooo many endoftheworld, atomicbombgoesoffinsurburbanneighborhood, lastpeopleleftonearthafteratombomb movies out that that I had nighmares for the longest. I seriously worried that if something happened while I was at school I would not be able to find my parents.

Liz Dwyer said…
Kim,
LOL, I need the unicorn channel, too! I seriously could not sleep last night and I bet if I'd managed to watch prancing unicorns I wouldn't have been up at 4 a.m. with my mind racing.

Sweet that you made it thru December! I miss my challenge - I've still been working out every day but I really liked connecting with people here and on my FB page about it. Maybe I start another one for February.

I do have pierced ears! A back-to-work gift is SO very kind.

Black Literature,
Oh yes, I remember being convinced by all those 80's shows that a nuclear attack was imminent. I can remember waking up every day thinking it was going to be my last day on earth because we were gonna see a flash of light and then that would be it. It's not good for the mind/heart to watch these shows.
7:02 AM, January 06, 2010

nick said…
I know what you mean. I avoid those armageddon-type dramas altogether, they're too depressing. They just present you with horrifying scenarios that will probably never ever happen.

I remember all the scares from years back, which in the end were never as disastrous as everyone predicted - the Cuban missile crisis, the nuclear arms build-up, the cold war etc. Like you, I prefer to concentrate on the positive, on what people are doing to build a better world.
9:28 AM, January 06, 2010

Kristen Howerton said…
Oh my word, my husband was watching this all weekend and after a few hours I was like, ENOUGH! Step away from the tv!
10:04 AM, January 06, 2010

Doulala said…
I think it's funny that the same day you posted this my facebook status was "The end is near!" I was talking about being done with this LPN program though! lol
8:21 PM, January 07, 2010