How Depeche Mode Wrecked My Bid to Become POTUS

I really should have kept up my bid to become POTUS.

Just think, being both black and female, I could pull in the votes from both prized demographics. Plus, some are speculating that the "Latino" vote is gonna be key in this presidential race. I would have that on lock too since I live in LA.

I'm no dummy so I would have already hired some calculating campaign advisers to spin the LA angle, and the fact that I like to eat the tamales sold at the Hollywood Farmer's Market. I wouldn't put The King of Infidelity Mayor Antonio Villaraigosa up on national TV to campaign on my behalf either, no matter how desperate I happened to be for the Latino vote. 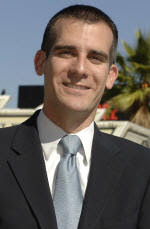 Instead I'd hire City Council President, Eric "The Hotness" Garcetti as my campaign manager.

Hmm...maybe I better not hire Garcetti. Folks might start thinking he should be the POTUS instead of moi.

Oh well, come to think of it, I guess I am a little under-qualified for the job. Besides, there's probably enough fodder on this blog to completely eliminate me from contention. The Depeche Mode obsession alone would be the stake through the heart.

Can you imagine the press getting ahold of that? Chris Matthews would eat me for lunch.

Matthews: So you say your campaign song is "Personal Jesus". That's an odd song for someone who's not even an evangelical Christian.

Los Angelista: Not at all, Chris. In the face of rising gas prices and continuing threats from Al Qaeda, I firmly believe the American people need to unite for change and as the song says, "Reach out and touch faith!"

Matthews: I hear you throwing that "change" word in like every other candidate these days but aren't you just twisting the song to get votes? Isn't it really a song about Elvis and Priscilla Presley?

Los Angelista: Well, I'm glad to see you know a little Depeche Mode history, Chris. You have to admit, there's nothing more American than Elvis!

Matthews: Don't try to get cute! We're playing Hardball here! Besides, the latest Zogby poll is saying you're alienating evangelicals with this song.

Los Angelista: Well, as you know, we can't always trust polls, can we, Chris?

Oh yes, it would all go downhill from there. 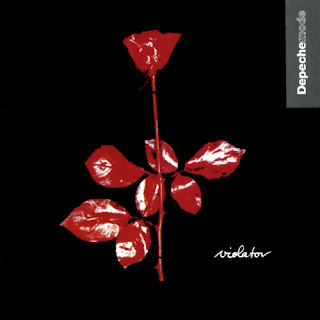 Rumors of Garcetti quitting over my insistence on wearing a "Violator" t-shirt to the debate would get published on the Drudge Report.

An opposing campaign would engage in some shady behavior by mentioning that I might have said that given a choice between attending a Depeche Mode concert and brokering a nuclear arms treaty with North Korea, I'd choose Depeche Mode.

My campaign would then have to release a statement clarifying that in a moment of levity, what I'd actually said was that I'd take Kim Jong-il to the concert with me because I'm sure hearing "Personal Jesus" sung live would help seal the deal.

But the damage would be irrevocably done. I don't even know if I could get Gloria Steinem to declare her support for me in the New York Times. Would she take up the call that I'm a victim of sexism since I can't even have a healthy love for Depeche Mode? Would she note how no one would be complaining if I'd picked a theme song from a more traditionally masculine artist like Bruce Springsteen?

Or maybe she'd point out that if I was white, no one would bat an eyelash at me picking a Depeche Mode song. But nooo, because I'm black, the mainstream media expects me to have a Patti LaBelle or Luther Vandross track blaring as I walk on stage.

But that would mean that Ms. Steinem would have to acknowledge that racism does still matter a whole lot in this day and age. And I might take it upon myself to ask her, since she thinks black men have had it so good for so long, whether or not she's ever heard of a white woman being lynched in the United States.

Gosh, that would be the final nail in my campaign coffin, wouldn't it? I'd have nothing left to do but write a runaway bestseller, "How Depeche Mode Wrecked My Bid to Become POTUS".

Except I'd be such a has-been by that point that only three copies would sell, the ones I bought and autographed for each member of the band. Then I'd have to return my advance money and file for bankruptcy.

Yes, I suppose it's still best that I am not running for the esteemed job of President of the United States. A life without Depeche Mode, even one as head of the most powerful nation in the World (even though the rest of the world sort of financially owns us now) would be no life at all.

But if you'd still like to, "Reach out and touch faith", feel free to join me:

Jen said…
This may be my favorite of your posts, Liz. Are you SURE you don't want to be POTUS? We could do a lot worse.

Jen,
I'm pretty sure I'll have to sit this race out, but if I change my mind, would you consider being my education advisor? Think carefully because once the DM thing comes out, everyone associated with me is going to get tainted. ;0

NYC/CR,
The fairytale thing was so offensive and Steinem's column...it made me think that she might need to go chill for a second at whatever institution Britney should be at. It was uncalled for. Support HRC, fine, but don't try to act like black men have just been skating through life with not a care in the world. AARGH!!!!
6:31 PM, January 09, 2008

soccer mom in denial said…
Someone just sent me a link to this post. WHERE HAVE YOU BEEN ALL MY LIFE?!?!?!?

I did follow Vince Clark's career so am in the Erasure camp but dM was my first concert. I got into a fight with my dad in high school (that would be in the mid-1980's) about putting a dM poster on the ceiling over my bed. Something about dad being offended at me staring up a Martin in a dog collar while lying in bed.

I mean, really now? Didn't he see the artistry in Boys Say Go? Just Can't Get Enough? Shake the Disease?

heartinsanfrancisco said…
"The fairy tale" comment was horribly offensive, as was Hillary's cynical manipulation of voters who now believe that she is really human after all. Puleese.

If she cries her way to the nomination, I am going to write in your name on the ballot and you can have Depeche Mode play at the Inaugural Ball.
9:49 PM, January 09, 2008

Liz Dwyer said…
Soccer Mom,
Oh you made me laugh and I'm so glad someone sent you a link to this. Welcome to my blog. I'm glad you came by.

I was not allowed any DM posters at all -- the dog collar was a big issue!-- so when I graduated from high school, I got a couple and put them up on my dorm walls in a gesture of defiance!

Heart,
Actually, I should rethink this run. I mean, if I win, maybe they'd come and play live in person and give me a congratulatory kiss on the cheek.

the joy said…
"change! Will you return it? I'll say it again, change!" out that on a poster, eh?

Liz Dwyer said…
The Joy,
Yeah! Someone else with DMOCD! I wanted a DM song as the wedding song but it had to be something we both agreed on, so no go!

Well, whoever gets elected is gonna experience some "pain" trying to get us out of Iraq, so we could totally just keep the original "Strangelove" lyrics. Now you have me thinking about that song...I'm gonna go put it on right now!
2:02 PM, January 10, 2008

MartiniCocoa said…
thank you for bringing the levity to the Gloria 'A Vote for Hillary means you get to keep your vagina' Steinem piece.

Liz Dwyer said…
IANSJ,
I knew Steinem's article was going to be some bull when I saw the title. Women are never the frontrunner? Oh really? Then what has Hillary been for most of the past year? How did Nancy Pelosi get to be Speaker?

Tami said…
Where do I send my application to be your offical POTUS campaign crafty PR chick?

I may not be as evil as Karl Rove, but I do have some tricks up my sleeve. I can help you get the Midwestern vote. And, Personal Jesus is my favorite DM song. (I even have the Johnny Cash version.) I also have their greatest hits CDs uploaded to my iPod.

I hope the fact that in high school my DM love was overshadowed by my Duran Duran love will not be an impediment. You see I can't resist pretty English boys in eyeliner..and DD was prettier than DM. I was young...I was shallow...forgive me.

I know I just sang the praises of The Smiths on my site, and yeah, I kind of liked them better than Depeche Mode, but like any good political operative, I could change that opinion if the money is right.
7:44 AM, January 12, 2008

Lola Gets said…
Girl, you are so crazy! I know Ive been slacking in '08, but I am bringing back my Manic Monday this upcoming week, so come on by!

Liz Dwyer said…
Tami,
You're hired! All we have to do win the South is play the Johnny Cash version and everybody will say, "Well, if Johnny liked it..." We just won't mention the Marilyn Manson version, m'kay?

How have I been missing this blog all this time? I came here looking for pictures of the kids, but stayed to track your endless obsession with Depeche Mode. Now I'm going to have to pull out my copy of "Black Celebration" in you honor.
8:15 PM, January 23, 2008